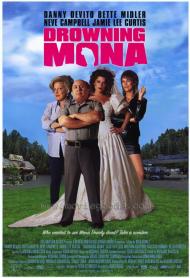 The Dearlys are one of the most unpleasant familes ever put on screen.

Drowning Mona is a funny and quirky comedy that tanked with critics and audiences alike. It has just a 28% fresh rating on Rotten Tomatoes and it barely earned back the $16 million that it cost to make. Despite all that, I still find it to be a very funny movie and one that I still quote occasionally.

Bette Midler plays the Mona from the title. She is a completely unpleasant person who dies in the opening scene in a car accident under suspicious circumstances. She lived in Verplanck, a small town in upstate New York. Given that everyone in town disliked her, including her husband and her son, there is no shortage of suspects for Police Chief Rash (DeVito). Prime among the suspects is Rash's future son-in-law Bobby (Affleck), who was partners in a landscaping business with Mona's one-handed, lazy and idiotic son Jeff. Also under suspicion is Mona's Wheel of Fortune loving husband Phil, who is having an affair with a local waitress played by Jamie Lee Curtis. As Rash investigates the murder he learns a lot of what's happened in the town through flashbacks, each of which is told from the point of view of the character telling them and most of the flashbacks completely contradict the other flashbacks. The whole convoluted plot though isn't really that important, since the main point of it all is just to be funny; something at which it succeeds quite well at for anyone with an appreciation for off-kilter comedy.

For such a small movie it features a large cast of well known actors. Along with the names I mentioned above it also features Neve Campbell as Chief Rash's daughter and Will Ferrell as Cubby the funeral director. Campbell is underused and Ferrell's part is a small one, but they both leave their mark on the characters.

While the whole cast is great, for my money, it is William Fichtner as Phil Dearly who steals the movie, or at least every scene he's in. Fichtner is one of those character actors whom you've undoubtedly seen in something, but probably don't know his name. Here he is hilarious as the battered husband of Mona's.

Some scenes in this movie just make me laugh out loud. In one of the flashbacks there is a knife throwing contest that never fails to make me laugh. Mona and Bobby are the finalists and Phil is one of the judges and when he votes for Bobby, the exchange between the characters is very funny.

If you enjoy offbeat comedy and odd characters you should find this movie to be a hidden gem. 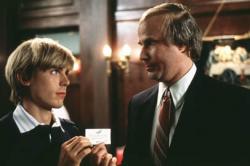 Casey Affleck and Will Ferrell in Drowning Mona

I could not agree more Scott, Drowning Mona was, in box office terms, a complete failure. I never gave it a thought when it was released in theaters. Casey Affleck once told Nylon Magazine that he was ashamed of it. However, I laughed through most of it and will likely watch it again.

Mona is such a dislikable person that no one shows up at her funeral except her husband and son. Cubby, the mortician comments that, “I've seen people more upset over losing change in a candy machine.” When Bobby tells his fiancé Ellie, “She's dead. It was just a car accident.” She responds, “You gotta be kiddin' me. Well, We gotta celebrate!” When a deputy tells Jeff, “Your mother drove her car into the lake Jeff, I'm afraid she's dead.” Jeff asks, “What was she doing in my car?”

Scott likes Phil while I enjoyed laughing at his idiotic son Jeff. He is hopelessly, yet humorously, stupid. When yelling at his boss, Bobby, he demands, “I want half. And don't give me none of that "fifty-percent" shit.” After Jeff flirts with a very young looking girl, Bobby says to him, “Dude, she's like 13.” Jeff responds, “Finally!”

Scott mentioned the cast, and I will add Melissa McCarthy, in just her second feature film role. She only has a couple of scenes, with the funniest being when she is dressed as a dominatrix. One of my favorite moments is when Danny Devito and Peter Dobson come upon Jeff as he is threatening to kill himself with a gun to his own head. Jeff calls Devito “Sheriff,” and Dobson very seriously and loudly informs Jeff that he is not a sheriff, as if at that moment that is the one thing that needs to be made clear. The way Dobson makes that point kills me.

In fact, the cast and their comic delivery make this movie work so well. Scott mentioned the knife throwing scene as his favorite. Part of that scene includes Chief Rash consoling the losing Mona with, “My mother always used to say, "When life hands you potatoes, make potato salad."” An ornery Mona comes back with, “Yeah? Well life handed me a pile of shit. What am I supposed to do with that?” Her husband Phil sincerely answers, “Make shit salad?”

Drowning Mona may have been over looked and unappreciated but I found it not only well worth the watch but often hilarious. 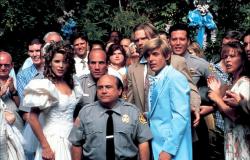 Scott and I watched this movie together many years ago and I remember not enjoying it all that much. The second time around I enjoyed it only slightly more. It's a dark screwball comedy containing a central murder mystery. I agree the script contains some funny lines, the best of which Eric quoted in his review. But comedy is all about timing and Drowning Mona is missing a few beats. To my ears at least, its syncopation is off. There are individual moments that work (like the fact that everyone in town drives a Yugo) but as a whole it never finds its groove.

Danny DeVito is miscast as Chief Rash. He should be playing an annoying secondary character where he gets to actually be funny and not be wasted playing straight man to the rest of the cast. Bette Midler is underused. She's the perfect choice to play Mona and I chuckled in nearly all of her scenes. But for a movie called Drowning Mona there isn't much Mona to be found. The script needed a few more flashbacks.

I've never been a big Neve Campbell fan. She was fine in the Scream movies but she's no comedienne. Take the scene where Bobby tells her what he did and that it seemed like a good idea at the time. Her response is, “A good idea at the time? 'Cut the grass at 6:00, lay sod at 7:00, DROWN THE DEARLYS AT 8:00'!” It's not a bad punchline but her delivery doesn't work. In my head I can hear what Jean Arthur or Carole Lombard could have done with it.

Ditto for Casey Affleck. He's a decent actor but in this role I don't think he brought anything funny to the table. He walks through the movie with a bemused expression on his face but that's hardly the stuff of great comedy. Jamie Lee Curtis is normally very funny but I thought she was sort of wasted here. I've never been a big Will Ferrell fan. A little of him goes a long way so I'm glad his part was small. If you blink twice you'll miss Melissa McCarthy completely. I do agree with Scott that William Fichtner steals the movie as Phil Dearly. He exhibits a droll sense of humor I never suspected he possessed.

Comedy is a tricky business. It requires precision of timing and just the right tone. Drowning Mona comes close to being a funny movie, but in comedy a near miss is as good as a mile.