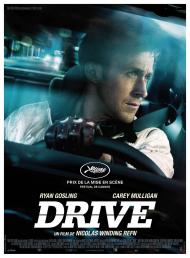 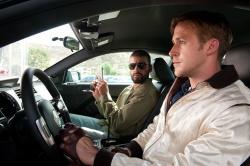 Drive is retro-cool and pleasingly fresh. This ultra-violent heist caper is equal parts film noir and vintage Tarantino in a sleek 1980s style but with a 21st century sensibility. Ryan Gosling proves he is the best thing in the movies today and his tooth-picked Driver is sure to become one of the all time great anti-heroes of cinema. Gosling recalls both Marlon Brando and Steve McQueen while remaining a true original.

Driver is a man with no past. He works part-time as a Hollywood stunt driver and moonlights as an armed robbery wheelman (just in case that isn’t insanely cool enough he dabbles a bit as a race-car driver too). His life changes forever when he befriends his neighbor and her young son.

The best thing a movie can do is surprise the audience. Drive does just that by refusing to be boxed in to just one genre. Like Pulp Fiction before it Drive has elements of many different types of movies but is its own make and model.

The movie opens with Driver pulling a job but instead of being just another car-chase movie it then goes in another direction. When he meets Irene and Benicio it flirts with becoming a romance but then suddenly turns into a tense heist flick before morphing finally into a hyper-violent mob/revenge story.

Gosling waltzes through the movie as cool as you please. He’s a man of few words and not someone you want to cross. As the movie progresses Driver goes deeper and deeper and his jacket gets bloodier and bloodier. This visual interjects a bit of much needed humor to the incredibly tense action.

The supporting cast is good but only Albert Brooks as Bernie Rose gets as juicy a role as Gosling. He plays one tough old son-of-a-bitch. During their classic first meeting Driver is reluctant to shake Rose’s hand. He has just finished driving a trial race and explains that his hands are dirty. “So are mine, kid.” Says Rose. My crystal ball predicts an Oscar nomination for supporting actor.

Carey Mulligan is a splendid actress but she isn’t given much to do besides represent the classic damsel in distress (or more accurately the damsel whose life is threatened by the mob). Christina Hendricks of Mad Men fame gets a memorable if very short part. She plays a tough girl and looks good strutting across a parking lot in heels carrying a large bag full of cash.

Drive is best enjoyed without knowing too much about the plot. I predict future classic status on this one. By all means cruise out to see Drive today. 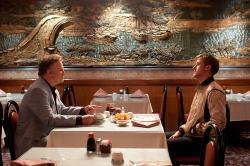 Ryan Gosling's character is so cool, he doesn't even need a name, just a job description. He definitely has a screen presence. So much so that while his character is almost a blank slate as far as personal history and the amount of dialogue he is given, he still manages to come across as fully developed. Director Nicolas Winding Refn has mentioned Steve McQueen's Bullit as an influence on the film, but you could also draw comparisons to Eastwood and Leone's Man with No Name trilogy.

I agree with you also Patrick about the 1980s feel to parts of this movie. It's most evident in the soundtrack and the hot pink title credits.

The cast is universally good. Gosling is cementing himself as Hollywood's hottest male star, proving himself to be both a legitimate actor as well as an action star. Brooks is fantastic playing against type as the mobster Bernie. At first he comes across as the more reasonable of the two mob bosses featured in the story, but that facade only makes him more threatening as the story progresses. I likewise agree with you Patrick that Carey Mulligan is underused. Like Gosling, her star is on the rise, but she's mostly playing the damsel in distress here.

Refn directs very stylishly. He uses dramatic pauses, the soundtrack and the sparse dialogue to good effect. The violence is quite bloody and almost shocking as very little prior to the first moment of gore has prepared the audience for it.

Despite the buzz and the positive reviews this movie has been receiving since Refn won best director for it at Cannes, it opened with a rather weak $11 million weekend. I only hope that word of mouth spreads or perhaps more likely that it finds its audience when it's released for home consumption. 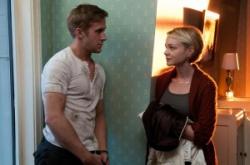 As is his style, Refn is sparse on the dialogue and exposition of the characters history.  That said, none of the deaths were cause for concern.  Karma is at work, as nearly everyone who dies is a criminal reaping what they sow.  If graphic gore is your thing you will have a few moments of excitement, but none of the killings are cause for an emotional reaction.

Refn is an artistic director.  During one tense moment, two characters are in a knife fight where both get critically stabbed.  Refn then moves the camera from the actors to their shadows, as they struggle.   Yeah, yeah Refn is going for "art" but I am just trying to enjoy this movie.  He worries so much about being artistic that he made a simple mistake a second later.  One of the characters was stabbed in his stomach and blood seems to be pouring out through his clothes into his hands.  The actor then leans back revealing part of his bare stomach where no amount of blood can be seen.

I agree that Gosling has proved himself a very competent dramatic actor, with Crazy, Stupid Love demonstrating that comedy may not be his thing.  Driver is that classic emotionally distant alpha male Hollywood cliche.  My brothers mentioned several comparisons, and I will add Rick from Casablanca.  Like Driver, Rick is cold and unfeeling until a woman changes him.

Refn is not my favorite director as I enjoy dialogue, while he seems to avoid it as much as he can.  He uses his actors merely as inanimate props, posing Gosling in front of the steering wheel or having Mulligan sit on the hallway floor even though an empty couch is behind her.  Refn directs for the eyes and not the ears.   In fact the one thing we always hear is a slow paced song in which some chick singer keeps repeating lines about being a hero and being human.  Subtle it is not.