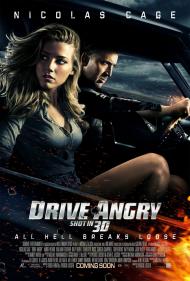 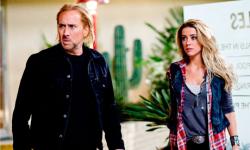 Nicolas Cage only seems to make B-movies these days and Drive Angry is no exception.  However, unlike most of his recent output, this one is fun and entertaining. This is the kind of over-the-top violent and silly movie that normally you would have to visit a drive-in to see. Its tale of revenge from beyond the grave is a thrill ride in the driver's seat of a souped up '69 Dodge Charger.

The story opens with John Milton's (Cage) escape from prison, although as the clue from his name indicates, this is no ordinary prison. It's actually Hell. Milton is on a mission to revenge his recently murdered daughter and rescue his baby grand-daughter at the same time, and he's not going let a little thing like being dead stop him. It seems that Milton's daughter got involved with a satanic cult, but when she wanted to get out of it, she was murdered by Jonah King, the cult's leader. It's King's intent to sacrifice the baby to Satan in three day's time, with the hope that this will start a new time of Hell on earth.

Milton soon meets up with the smoking hot Piper (Heard), the owner of the Dodge Charger, who agrees to give him a ride to where he's going. Piper is one of those gorgeous waitresses that only exists in the movies who inexplicably works in a road stop diner. You know the kind, the big breasted blonde with the southern accent and the cut-off shorts that are so tight you can read the dates on the coins in the pocket. It's a  part that Heard plays to perfection, bringing the right amount of country sass and sex appeal to the role.

Chasing Milton is The Accountant (played by a scene-stealing William Fichtner), an emissary from Hell, whose job it is to bring Milton back with him. His imperturbable, suited character is both funny and menacing. In his pursuit of Milton he comes across some of the Satanists, whom he dismisses easily. When they tell him, "We have a pact with the devil." He sniffs, "Funny, he's never mentioned you."

The violence is bloody and to the extreme. Limbs are shot off and knees blown out with shotgun blasts and all in vibrant 3-D Technicolor. In one particularly memorable moment, Milton engages in a gunfight while having sex. He kills or maims several men from various positions and all without ever pulling out or putting down the Jack Daniels bottle that he's also holding. It's the kind of scene that makes you laugh at the audacity of it all.

Even the dialogue is both cheesy and funny. Jonah tells Piper at one point, "I'm going to kill you and then I'm going to defile your corpse." To which Piper replies, "Yeah, well, in-between, I'm going to kick your ass."  Later, Jonah tells Milton that, "I'm going to beat you to death with what's left of your daughter", because as it turns out, Jonah has made a cane out of Milton's daughter's femur.

And while it seems like every other movie these days is pointlessly in 3-D, with Drive Angry it actually helps, by making it all even cheesier and adding to the sense of retro-fun. Sure the flying bones and guts would still be entertaining in plain old 2-D, but the 3-D does add something.

I suppose at the rate Cage churns out movies, he was bound to get lucky eventually and make a good one. This one even hints at the possibility of a sequel and I would certainly see it if they make one.  If it's just half as good as this one, it will still be twice as good as most of his movies. 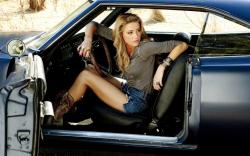 Drive Angry is rated R fun.  The gore, swearing, nudity and sex make this an adult film, but it is essentially a teenage boys fantasy.  Milton drives hot cars, kicks ass and big breasted women  want to screw him.

Piper is the kind of woman only found in fantasies.  She gets her butt kicked many times but, no matter what, her makeup never smears and she remains as hot as she comes.  What an awesome low maintenance girlfriend.  Her boyfriend Frank is twenty years her senior, and she hangs out with the just as old Nicolas Cage.  She is a ten who likes to date fives.

The Accountant is my favorite character and deserved more screen time.  He has the best understated  lines.   "Would you have killed the baby if he asked?... Thought so. See you soon."  He and Milton have better chemistry than Milton and Piper.  The Accountant says to Milton, "Wouldn't wanna be you when Satan finds out!"  Who responds, "What's he gonna do, not let me back in?"

Patrick Lussier has made a career working on horror films (Scream, Dracula 2000, My Bloody Valentine) and certainly has a flair for the over-the-top vulgarity required of such films.  Lussier and Todd Farmer, who plays Piper's boyfriend, wrote the screenplay with just enough humor and tension.  It is as predictable as expected, but when the ride is so much fun who cares if the destination holds no surprises.