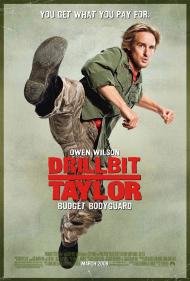 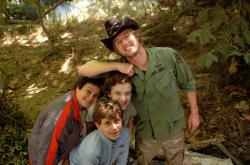 Drillbit Taylor is Seth Rogen's prequel to Superbad. The same three guys who were trying to score some alcohol, before graduating from highschool, are shown here going to highschool as freshmen. It is not the same three characters by name but personality.

On the first day of their freshman year, two friends intervene with two bullies shoving a kid into a locker. This earns the wrath of the bullies but a friend from the said victim in the locker. After much humiliation and pain, they interview bodyguards. They end up hiring Drillbit, not because he is their first choice but because he is the only one they can afford.

Drillbit is an army deserter now living as a bum. Wilson is pretty much playing his same character from You, Me and Dupree. He is a shiftless vagrant, who sponges off those around him. At first he takes the kids offer just for the money, but eventually learns to like them. He pretends to be a teacher at the kid's school and ends up falling for a fellow teacher.

Drillbit is a criminal who at first only sees the boys as a means to make money. Not only does he take their payment, but he robs their parents house. He tells some fellow bums about his windfall and they are soon pretending to be teachers and rob the kids house even more.

Ever since My Man Godfrey, Hollywood has had a tendency to show bums to be victims of society. Here they are, surprisingly enough, portrayed as lazy criminals. One bum provides my favorite scene. While pretending to be a teacher, he tells a classroom of students that JFK was assassinated because Marilyn Monroe wouldn't have sex with Castro.

The most honest part of the movie is that it really shows how ineffective principles, teachers and parents are in dealing with a bully. One kid says he has been picked on and another denies it. Who is a teacher to believe? As hard as it may be for a teenager to take, the truth is they have to deal with this pretty much on their own.

The heart of the film is Drillbit's relationship to the three victims of highschool violence. However, the actors playing them are fairly charmless. The fat one seems to just be doing an imitation of Jonah Hill in Superbad. The two bullies are far more affective. Alex Frost, as the head bully, has a look in his eye that could get him plenty of roles playing psychos and bad guys. Josh Peck is playing against type as the bully's toady. His career, up to this point, has been playing the good guy, such as in his popular Nickelodeon television show Drake and Josh. One of his earliest roles was playing the victim of highschool bullies in Max Keebles Big Move.

Seth Rogen is definitely the writer du jour. His comedies with a heart are working well for him. However, he may need to get away from the teenage geek angle for awhile, as his stories are becoming far to similar. 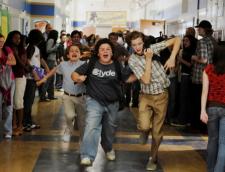 Too much been there, seen that.

Wilson isn't just playing the same character as he did in You, Me and Dupree, but also the same character he's played in just about every other movie he's ever starred in. Sure he has his charms, but range isn't one of his strong points. And even his charm can't raise this movie up above mediocre. I mean the high-school bullies beating up the nerds? This is only what? The 169,886th time we've seen that story right? If you're going to try to wring some new life out of that old chestnut you need to bring more to the table than this.

The real problem is what you said Eric, the two main kids just aren't that good. They're not that charming or sympathetic. I liked the little musical loving kid, but neither Nate Hartley or Troy Gentile carry the movie that well. Although to be fair, it's not like they're given anything too original to work with. At the end of the movie when they finally triumph (c'mon, that's not a spoiler. Did you really doubt that they would?) I didn't feel anything like I should have at that point, except maybe a kind of relief that it was over.

This is actually one of those tough movies to review because while I didn't love it, I didn't hate it either. It's just sort of average; apart from having Owen Wilson in it's like an after-school special or something, only the special in this case is meant ironically.

If I think about it, I guess the only real emotion this movie provoked in me was irritation. When the bully is telling the lies to the principle and the parents and they're all believing him, it just annoyed me. So I guess the actor playing him was doing his job, but at the same time I never really wanted the stars to come out on top as much as I just wanted to see the bully smacked down.

With it's Judd Apatow connections and similar theme, I had hoped this movie might be similar to Role Models. Sadly, it's not even close. That movie had heart and humor, this one is lacking both.