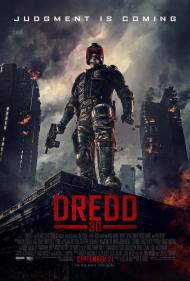 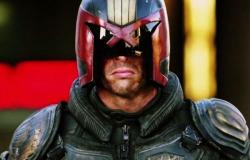 Dredd is based on a comic book rather than a video game, but unless you were already familiar with the character, you'd never know it. Its simple action plot and over the top gore could easily have been lifted from a first person shooter or even an old fashioned side-scroller. Although, perhaps the clue that it's not based on a video game is that despite its B-movie formula, it actually manages to be fairly entertaining, something most movies based on video games rarely are.

The setting is in the future when most of the world has become an irradiated wasteland. The only city left in America is Mega-City One, a vast walled metropolis that stretches from what used to be Boston, down to what used to be Washington. In this city of 800 million residents, it is the Judges who keep the peace. They are the police, juries, judges and executioners all rolled into one. The most feared and the most dedicated of these judges is Judge Dredd, played with gravelly voiced stoicism by Karl Urban (McCoy from the Star Trek reboot).

That's the background. The plot, and you'll see what I mean about sounding like a video game, goes like this. A triple homicide is reported in one of the cities many slum towers and Dredd and a young rookie judge named Cassandra Anderson (Olivia Thrilby) go to investigate. They are subsequently trapped in the building by gang leader Ma-Ma (Lena Headey) who announces to the building that anyone who kills the judges will be rewarded. It's up to Dredd and Anderson to battle their way up the building to the penthouse flat where Ma-Ma has her headquarters. There are gunfights, boss monsters, ammo management, and leveling up, both literally and figuratively as Anderson becomes more powerful and knowledgeable as the movie progresses. Obviously Dredd himself is already maxed out in terms of character level. In short, all the elements you'd expect to find in a video game.

Ma-ma is peddling a drug known as Slo-Mo that has the effect on the user of slowing down time. This allows for some clever visuals, especially in 3-D, but also some quite gruesome ones. We see beads of water sparkle and move in a slow motion, high-definition ballet dance in one scene, while in the next we are shown a bullet piercing a bad guy's cheek, blowing out the side of his mouth, with blood, meat and teeth exploding in gruesome detail.

With so much against it, this movie shouldn't really work, but somehow it does. It helps that there's a tongue in cheek aspect to part of it as exhibited by some of the sly humor that is injected to alleviate the oh-so-serious tone. The action is also well done, which is good, because there's a lot of it. It's definitely a B-Movie, but it knows that it is and doesn't want to be anything else.

This is actually the second movie to feature the Judge Dredd character. Sylvester Stallone played the character in 1995 to derision from the critics, anger from the diehard Dredd fans and was ignored by everyone else. The biggest complaint from the fans was that, probably in an effort to justify the salary of its lead, the character of Dredd was shown without his helmet. Something that never happened in the comics.

It's not going to win any awards, but if you're a fan of old school action movies with a little humor thrown in and don't mind some gore, you definitely won't be bored with this one.

Dredd could win some awards if we are talking special effects. So often films are made 3D for no other reason than to jump on the band wagon and hope the gimmick helps to sells a few more tickets. Dredd however, is actually made better by it, particularly in the gruesome scenes.

Although we never see Urban's face, we are allowed glimpses into a personality hidden behind the helmet.  I have never read the comic book, but based on what we see here, Dredd is a straight laced tough as they come cop, jury and judge.  He makes on the spot verdicts and sentencing.  He is a conservative's wet dream.  There are no pansy ass liberal grey area debates. He follows and defends the law with black and white decisions, spouting such lines as, "Negotiation's over. Sentence is death." and the catch phrase, "Judgment time."

This trait is the cause for his biggest mistake.  He should have killed the gang member they drag along. He does not because his mind reading partner says she is only 99% sure he is the one who killed the three men.  It is one of a few plot hiccups.  When the gang member escapes and abducts the psychic, why does she not play mind games with him in the elevator in an attempt to escape?  Earlier she showed how affective that can be. How about when he is again alone with her and is about to kill her?  It is her one amazing ability but she only uses it when the plot wants her to.

Dredd is a no brainer action packed film. I expected a bigger finale, but it still satisfied. There is no thinking or even emotional investment required from the audience. Just sit back and watch it all play out one bullet at a time, and if you can, see it in 3D to really enjoy the over-the-top gore.

Lena Headey as Ma-Ma in Dredd.

I've seen the cheesy 1995 Sylvester Stallone version but I've never read any of the comics. However, not being familiar with the titular character is no detriment to enjoying this raucous thrill ride. The concept of the judges is easily explained and precious little time is wasted in exposition. It takes just a few minutes before Dredd and Anderson find themselves locked inside that 200 floor tower facing dozens of enemy gang bangers.

The fact that Anderson is a rookie taking her final examination during this crisis adds a slightly ironic twist to the very simple plot. Dredd never panics or seems unsure of himself but calmly questions his pupil on what their next move should be. This brings a tiny bit of levity to all the carnage and gore.

I agree with my brothers that the special effects are nicely done with the Slo-Mo drug providing the standout effect which has become the film's trademark camera trick. Mega-City One looks impressively vast and for the most part the action scenes are fast-paced and excitingly filmed.

There is one scene that seems a bit silly though. When Ma-Ma is firing that huge weapon from one of the open floors of the building we see Dredd attempting to stay out of the line of fire. He runs down hallways and around corners always just ahead of the weapon's deadly path of destruction, yet Ma-Ma never changes her position or the direction in which she is firing. Chalk it up to one of those B-Movie mistakes we aren't supposed to notice, I guess.

Considering that he only has his mouth and chin to work with I agree with Scott that Urban does a good job as Judge Dredd. Am I the only one who thinks he resembles Stallone from the nose down? But unlike Sly's version they wisely chose to stay true to the comic book by never showing the titular judge's face without the helmet. Dredd delivers exactly what you would expect, amped-up action, gore galore and an occasional tongue-in-cheek sensibility.