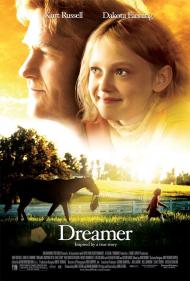 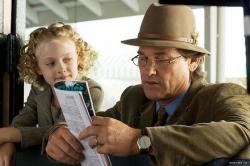 I have to admit that I went into Dreamer expecting to overdose on sappy sweetness. I'm not normally an animal movie lover. And yet, while there is plenty of sap to go around here, it is handled in such a way that I didn't mind it so much. The emotion centers on a family, specifically a father/daughter relationship, rather than the horse. And thankfully, unlike a Disney movie, the horse is just a horse, showing no signs of breaking into speech or song or dance.

Dakota Fanning, who has to be one of the greatest child actors of all time, stars as Cale Crane, the daughter of Ben Crane (Russell), a horse trainer in Kentucky. When the movie opens, Cale and Ben are distant, but reluctantly, at the urging of his wife (Elizabeth Shue), he agrees to take her to work with him one day. During a race that day, a thorough-bred horse that Ben had tried to keep out of the race, falls and breaks a leg. When the owner blames him, Ben quits his job and takes the fallen horse as part of his severance pay.

His first thought is simply to heal the horse, whose name translates into Dreamer, until she's well enough to breed and then mate her with another champion racer, and then sell the offspring, which could go for as much as $300,000. Unfortunately, it turns out that Dreamer is infertile. It soon becomes apparent however that Dreamer is healing beyond anyone's expectations and will actually be able to race again.

As Dreamer heals, so does the Crane family. Ben, a distant husband and father, builds a relationship with his daughter and reunites with his estranged father and fellow horseman played by Kris Kristofferson. To a lesser extent he warms his relationship with his wife as well, but her part is less integral to the story and Shue is definitely in a supporting role.

The movie ends as you'd expect, with a big race and Dreamer entered as the underdog. I won't tell you whether or not she wins, but if you can't guess, then I'm stunned. And yes, the ending is sappy, with soaring music and all, but damn it, it still made me smile.

It is Fanning who keeps this movie from becoming too precocious. Just eleven years old, she seems more like a midget sometimes than a little kid. What would be annoying from a less talented child actor seems sincere coming from her. 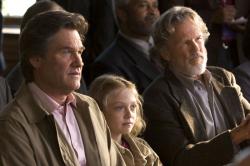 After seeing the now grownup Dakota Fanning in The Last of Robin Hood, it was interesting revisiting her at the peak of her popularity as a child actress. She turned 11 in 2005 and she had already starred opposite Denzel Washington in Man on Fire and Tom Cruise in War of the Worlds. She was so popular at the time that the script, which was originally written for a boy, was changed to a girl specifically for her. According to Hollywood lore it was only after Fanning agreed to play Cale Crane that Dreamworks gave Dreamer a green-light.

As my brother wrote, Dreamer is old fashioned and heartwarming. The sap gets pretty thick by the time Kurt Russell's character reads his daughter's creative writing assignment out loud in front of the other parents. But it does at least manage to maintain a decent level of realism, thanks mostly to the talented cast. And, although there are several cute moments where Fanning feeds popsicles to her horse Soñador (Spanish for “dreamer”), the emotional center of the story remains on the family rather than the animal.

The cast, led by the almost supernaturally talented Dakota Fanning, rises above the level of the script. The father/daughter relationship between Fanning and Kurt Russell is well-done as is the son/father relationship between Russell and Kris Kristofferson. In one of the best scenes, the two generations of Crane men sit watching Cale play with her filly. Ben says to his father, “You ever seen a kid so happy with a horse?” Pop thinks for a second and then replies, “Yeah, I have.” And you can see him picturing Ben as a little boy. As a grandfather this is his second go round and Kristofferson plays the moment perfectly. Freddy Rodriguez and Luis Guzman add to the proceedings as Ben's horse trainers. They both get more to do than poor Elisabeth Shue, whose character -as Scott mentioned- gets shortshrifted by the script.

Dreamer is a pleasant enough diversion but there isn't a hint of originality to it. The script (based on a real-life racehorse named Mariah's Storm) is strictly by the numbers. If you can't tell exactly what's going to happen next in every scene you must be under 12 or watching your very first movie. If, however, you're in the mood for a feel-good family movie about a girl and her horse, complete with swelling strings and plenty of predictable hugs and tears of joy, you could do much worse than Dreamer. 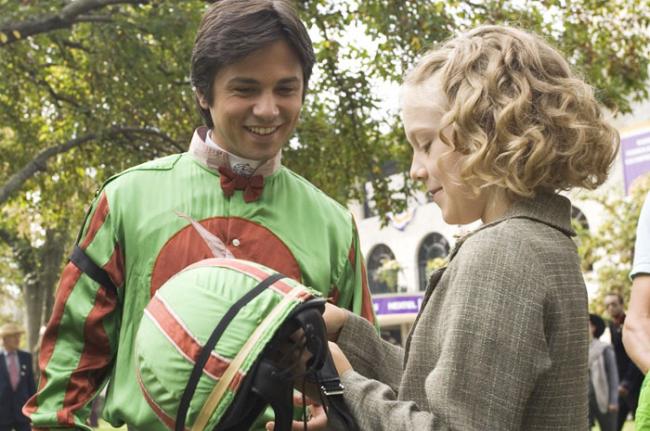 My first thought as the film started was that Kirk Russell was miscast. He looks more like Dakota Fanning’s grandfather than father. At 54 he is certainly capable of being the father of an eleven year old but she could also very easily be his granddaughter. Russell’s father is played by Kris Kristofferson who is only 17 years his senior.

However age inappropriate I felt he was, he still delivers a good performance. I particularly liked the scene on parent’s night when he reads his daughter’s story out loud to the teacher and other parents. It is a story about a struggling king but he realizes that it represents him. He tries to not let it show just how the story affects him but he subtly allows us to see that it does.

Dakota Fanning is excellent in the role. The Georgia born actress has big blue curious eyes, perfect for the part of a Kentucky child fascinated by a horse. My brothers both heaped praise on her acting ability and she deserves it all. Not only is she a great little actress but she never becomes cloyingly sweet, as every child actress since Shirley Temple has tended to be.

Dreamer is a story of a child who learns wonderful lessons from all of the adults around her. From her father she learns how to take care of a horse and the business of owning one. She sits in the diner her mother works at to help make ends meet. She enjoys what she thinks is the job’s perk, pie. Her parents are teaching her that if you want something you have to work for it and if you want something very badly you have to work very hard for it.

My favorite piece of her education comes from the jockey, and family friend, Manolin. He tells her of his lost dreams when he was in a horse riding accident that left his chest and shoulders scarred. From Manolin, Cale sees that you can come back from an injury. Like the horse, Manolin has to train for the race. He needs to lose some weight and I laughed at the scene where he is taunted by donuts.

Dreamer has much to offer but as my brothers noted, it is a standard sports film. The plot of an underdog athlete or sports team suffering through but never giving up on their way to the big event is nearly as old as film itself. The climactic race is milked for all the drama it can hold. Even though it lacks in originality, I was still taken in by this likable group and the horse that brings them all together.