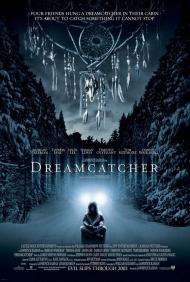 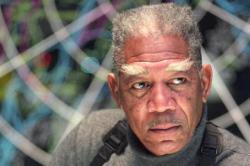 Writer Stephen King and director Lawrence Kasdan join forces with this interesting and trippy sci-fi horror movie. The plot is typical King with his penchant for psychic characters and gross-out moments. It involves four childhood friends, given special mind reading abilities by a mentally retarded boy that they save from bullies. Years later they spend a weekend each year at a remote cabin in (where else?) Maine. Soon they are dealing with slimy alien worms that incubate inside living creatures before slithering out of their anuses. Things escalate when a top-secret alien-hunting military platoon descends on the small town near their cabin and quarantines all of the people in the region. Ultimately the entire fate of the human race is at stake.

Despite the glossy look of it, this is really a glorified B-movie, sort of an updated alien invasion yarn from the fifties. Morgan Freeman overacts as the slightly insane leader of the military alien hunters; eventually at odds with his second in command, played by the reliable Tom Sizemore. But it is the four psychic friends that carry the movie, imbuing it with heart with their down to earth camaraderie.

The plot is ambitious, mixing in childhood flashbacks, humorous buddy moments, high-tech action sequences and even a bizarre look inside one of the characters minds. It isn't as muddled as that sounds and the hodge-podge style of Dreamcatcher with its quirky plot twists somehow manages to work.

This is the kind of movie that offers a fun joyride. Check your mature, adult self at the door and just sit back and go with it. Trying to make sense of all the plot holes will only confuse you and really, why bother. The acting is suitable to the task and the movie is quite beautifully shot. Also it does have moments of genuine tension and suspense. If you are looking for a movie to satisfy that fifteen-year-old kid inside of you, this is it. 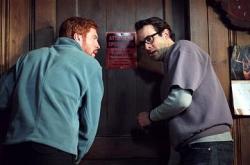 Patrick is partially right. The second half is a glorified B-movie. Alien monsters, shoot outs and chases are the norm here.

The first half, and may I say the far better half, is genuinely a great film. Four likeable guys get together once a year at a remote locale. They share a secret that they can only talk to each other about. They each have strengths and weaknesses. Although they are not all completely fleshed out, you do get enough characterization to like and care about them.

I like these guys and thus did not like the ending. Half of the guys die. I won't say whom but it is not hard to guess. How can I enjoy an ending when half of the heroes end up dead?

Dreamcatcher turns from a possible character film, to an all out science fiction film. This film's tag line should have been The Big Chill meets Independence Day. The climax of a movie is supposed to be the big pay off. I saw the ending of this movie coming from a long way off. I was hoping I was going to be wrong. Nope, it ended as a bad as I feared.

The relatively unknown actors who play these parts are all very good. Damian Lewis is particularly good when the alien possesses him. Donny Wahlberg, whose small role in The Sixth Sense was memorable, does another small juicy role. Here he plays an apparently mentally handicap friend of the four buddies, who is suffering from leukemia, but then he turns into an alien so what does that matter.