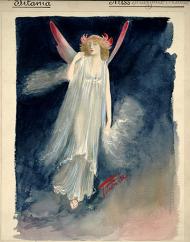 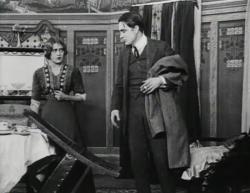 The Dream is an early Mary Pickford one-reeler (today known as a short) that was believed to have been lost but was found and restored in the 1990’s. I had always mistakenly assumed that Pickford always played young girls or virginal young women; however in her early career she often played a housewife as she does here. She was then 18 years old. By 1912 she was the first internationally known movie star and she would later become the first woman in the history of the United States to earn a million dollars in one year. She didn’t actually play a child until 1917 when she made The Poor Little Rich Girl at the age of 24. Audiences loved it so much that “America’s Sweetheart” would be forever stereotyped as a grown woman playing a child.

The Dream is a simple story with only a few sets and two outdoor shots. A loutish husband spends a night on the town while his faithful wife waits patiently at home. He returns drunk and treats her callously before falling asleep and dreaming. He dreams that his wife is a drinker and smoker and she goes out on the town and flirts with other men. He cannot handle this and so he decides to shoot himself. As soon as he pulls the trigger, he of course wakes up, and will now be kinder to his wife.

Pickford must have loved the scene she gets to play in her husband’s dream. She wears a fancy dress that gives her an hour glass figure, a stylish hat with a feather, and she gets to act rather brazen by swilling alcohol, smoking a cigarette and behaving aggressively. The husband (Owen Moore), for his part, overacts horribly in his dramatic moment before he attempts suicide. I guess that was the style then.

The story is simple but I appreciated how easy it was to follow. Some early silent movies are rather confusing with their lack of subtitles, jerky camera work, and sloppy editing. The Dream is interesting in that Mary Pickford hadn’t yet found her iconic look with her head of long golden curls; still her talent and screen-presence are undeniable. 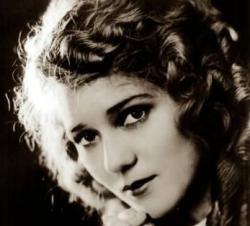 Mary Pickford in a photo not from The Dream.

I could not agree more Patrick, about Owen's acting as the husband.  He is completely over the top and melodramatic.  Pickford acts circles around him and proves that even in the early days of cinema, less was very often more.

The highlight is definitely Pickford in the dream.  She livens things up with the enormous costume, of which the hat alone must have weighed five pounds.  Her smoking isn't the most convincing, but her plate kick is the best moment in the entire film.

One of the things I love about watching these old, old silent films is that they are like a time machine that allows us to look into the past.  There are a couple of old cars in this short and it's amazing to think that these aren't reproductions, they're brand new.  My favorite scenes in all silent movies are when they go outside on location.  That's when you really feel as though you've found a time capsule.

Although Mary Pickford is a silent movie legend, I have to confess that this is the very first of her movies that I've ever seen.  And while this is no great shakes of a movie, even for one so short, you can definitely see that she had something.  Whatever Moore had, on the other hand, I hope he got rid of it quickly.

As of this writing, you can see this short for yourself on YouTube. 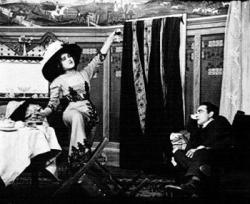 The automobiles and Mary Pickford's clothes are a true testament to when this movie takes place and are fascinating for history enthusiasts. What I also found interesting is just little men's clothes have changed over the past 100 years. The formal wear men wore in this movie would nearly still be acceptable today. Sure the cut is a bit different and the waist line higher but over all the suits are much closer to today's styles than the women's dresses. The grooming is a bit different, with mustaches not well trimmed, but the haircuts on the men could exist in almost any time period.

Moore does over act, but as this is 1911, film acting had not been perfected.  He is still playing to the back row as if on a stage. As Patrick often points out, these early films had yet to start using close ups so he is playing it big.

Pickford was likely wearing a corset here, as her waist is quite tiny.  I have seen some of her other films, but none have shown her with such womanly curves and charms. She may have been known for playing a little girl but Mary Pickford was definitely all woman.