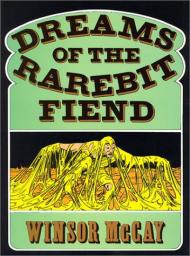 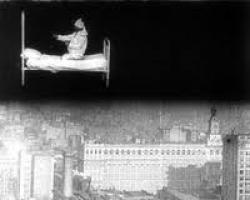 Dream of a Rarebit Fiend is a warning against too much imbibing and gluttony. A drunken man in white tuxedo and top hat sits eating rarebit (Welsh Rabbit) soup out of the tureen. He then staggers out of the restaurant and begins walking home. With the use of superimposed images, we see how the world looks to him, off balance and spinning out of control. He grabs hold of a post to keep from falling down. A stranger comes along and helps him walk.

He arrives home, changes into nightclothes and stumbles to bed. He immediately begins to dream (hallucinate?). First his shoes begin to slide across the floor and his bedroom chairs disappear. Next tiny white-clad imps appear above him and start jabbing his head with pitchforks. His bed begins floating and spinning all around the room and then sails out into the night over the city.

He begins to float out of the bed and grabs on to the bedrail in fright. Finally he falls and, luckily, gets caught on a weather vane. He then wakes up safely back in his bed with a splitting headache.

The image of the man on the floating bed is quite famous and in 1906 it was probably downright amazing. This was the Edison Company’s most popular release of the year but, alas, now it is not much more than an historic curiosity. 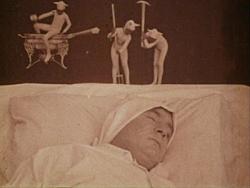 Jack Brawn in Dream of a Rarebit Fiend.

Dream of the Rarebit Fiend is based on a 1904 comic strip in which different people would overindulge and then experience bizarre dreams.  Apparently the comic strips always ended in the same way this movie does, with the protagonist waking up to learn it was all a dream.

There really is no plot, but just an excuse to showcase the special effects of the period.  Although the floating bed is the film's most iconic image, the miniature devils poking the man in the head are perhaps the most impressive effect, if just a simple one.

These early filmmakers were dabblers who experimented with visual trickery, but they knew little of storytelling.  We know nothing of the gluttonous man and so care little about him. They could have started the film with him being fired from a job or having an argument with someone and so to console himself, he goes on a binge.  Anything to give us a clue as to who the man is, would have improved the narrative.

Like you Patrick, I found this to be more of a curiosity than entertainment.  Oh, and for the record, Welsh Rabbit is melted cheese, most often served over toast. 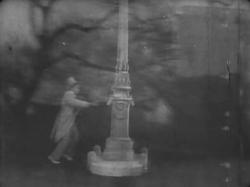 What did he eat?

Wallace McCutcheon and Edwin S Porter were film making pioneers.  Porter directed 181 films from 1898 to 1915.   He is also an uncredited writer of The Great Train Robbery (1903).

My favorite special effect is the double screen where one shot is superimposed over another.  It is when the over eater is walking home in a gluttonous stupor.  This seems more like an experiment though, than a real film.