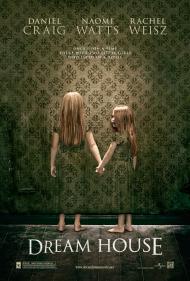 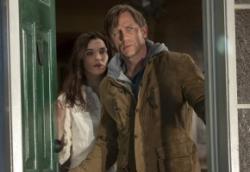 I was intrigued by the trailer for Dream House and not because I'm a fan of creepy horror movies (although I am), but rather because the trailer gave away the movie's big twist. I've also been surprised by the extreme negative reaction by other critics. It currently sits at just 5% on Rotten Tomatoes. Granted, it's not a great movie, but even despite its weaknesses, I confess that I somewhat enjoyed it.

Real life husband and wife Daniel Craig and Rachel Weisz play married couple Libby and Will, the parents of two young daughters. The movie opens with Will leaving his job at a publishing company to become a fulltime writer. His family has just moved to the suburbs from New York City. After some odd happenings occur around the house, Will discovers that a family was murdered in their new dream house and someone may be now stalking them. A neighbor, played by Naomi Watts, seems to know more than she's letting on about the murders. After some investigation by Will he learns more than he wanted to, and although the trailer gives away what it is he learned, I won't do so here, just in case you don't know.

The movie is helped in large part by its stars. Despite some awkward dialogue Craig and Weisz made me care about their characters. I wanted them to be a happy family. Likewise, Watts brings empathy to what is a small part. The movie really belongs to Craig and he manages to deliver a pretty decent performance, reminding me that he is a good actor, even if he is a poor James Bond. One mistake the filmmakers make is including a scene where he isn't wearing a shirt. That his character would be so buff and with so little body fat just doesn't fit the character.

Where the movie falls apart is in the script. It's a pretty high concept idea and the script just isn't smart or original enough to really capitalize on it. There aren't enough scary or creepy moments and the final  solution to the mystery feels a little too easy.

Despite its many weaknesses though, I still wanted to know how it would end. A happy ending seems out of reach, but I still wanted a satisfying one and for the characters I found one. Sure, it could have been more tense or exciting, but I still felt a sense of closure by the conclusion.

It's never a good sign for a movie when I almost feel that I have to apologize for enjoying it, but it really feels that way in regard to this film. I know that objectively it's not a great film. Clearly it's one of those movies being dumped in September, but thanks to the cast, I was never bored. 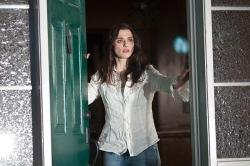 The only possible enjoyment to be found in Dream House is in discovering the truth of what happened in that house.  Since the trailer gave away about 75% of the plot, much of the mystery is already known before the theater even turns dark.  As Scott mentioned, this movie will be a much better watch if you have not seen any previews for it.

Essentially the story is Craig talking to Weisz, Watts, his kids or some official, be it a doctor or police.   The only action occurs at the end, when the entire plot turns into a made for television movie.   At one point Craig and Weisz find their daughters playing in a secret room in their home they never even knew was there.  Of course this room is going to come back into the plot, right?  Wrong!  There are truly very few scares or thrills to be found here.

The cast alone may have been enough to keep Scott interested, but not me.  Short of a Rachel Weisz nude scene, there was nothing this cast could have done to have livened up this mundane film.   Perhaps if the trailer had given less details, I may have been able to enjoy this more.  At least then I would not have had to wait for the second act to see anything new.

According to some reports, the director, Sheridan, as well as Craig and Weisz were dissapointed by the film's final cut.  Sheridan even re-shot some scenes after getting poor results from test audiences.  Craig and Weisz refused to do publicity for the film.  Apparently they, as well as every film critic, sans Scott, knew what a dud they made.