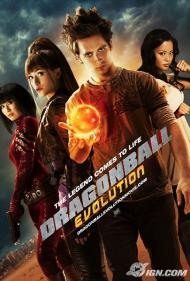 Dragonball is the most popular anime show to cross the pacific since Speed Racer. It ran for years in Japan. It featured a huge cast of characters that grew from children to adults. By the end of the series the characters who started as kids were now the parents of teenagers.

My oldest son loves the series. He has seen most episodes, while I have just been a casual watcher. The show was unique in that it was by no means a children’s cartoon. Cartoon Network showed an edited version, and later the original version which contained blood and swearing. The episodes I remember the most are the ones where an entire half hour episode would be a battle. Two or more characters would fight each other with martial arts, power blasts and really big power blasts. The episodes usually ended with miles of land destroyed, both competitors bloodied and sweating. Characters occasionally died on the show. It is no surprise the manga comic book became such a great show.

Dragonball Evolution opens with a teenager, Goku, being trained by his grandfather. He is in love with a girl, Chi Chi, and gets picked on by some bullies. Under his grandfathers instructions he does not fight them. Goku is just your average teenager. An average teenager who is actually from another planet, and has the power to do ki blasts.

His grandfather gives him a four star dragonball on his 18th birthday. “There are only six others in the world, each with stars of one to seven. Besides you, Goku, this is my greatest treasure.” His grandfather explains. The powerful green skinned Piccolo, along with his hottie wench are searching for them, as once they are collected, it summons a dragon who grants a wish.

After Piccolo dispatches grandpa Gohan, Goku seeks out Master Roshi who trains Goku and informs him that, “Only one chosen warrior has the power to defeat this threat.” The two are joined by a few recognizable characters from the show as they search for the balls. As expected, the movie ends with a battle between Goku and Piccolo.

I am not so attached to the characters of the show that the licenses taken with them was a problem. My son however, was beside himself with some of the changes. He called the movie out several times while events happened on screen. I guess the more you know the show, the less you will like the movie.

I liked the character of Goku. He openly discusses his insecurities with his grandfather and Chi Chi. He handles some bullies with his martial arts skill without ever doing a punch or a kick. The weakest aspect was that it seemed to rush by. At only 84 minutes, the movie seemed more like an hour episode than a real movie. This is most noticeable during the abbreviated battle at the end. Sure, Goku gets to do his big famous blast, but he and Piccolo should have gone at it a lot longer. The original show was made for adults, and then edited for kids. This movie seemed too much like the edited version.