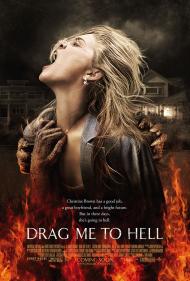 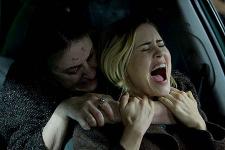 Collecting on a delinquent loan can be a bitch.

Too often a movie appears in the previews to be one thing, but then turns out to be something else all together. Drag Me to Hell looked like an average, run of the mill horror flick but ended up being a campfest of over the top situations, up to and including some laugh out loud moments.

Christine works at a bank where she decides to not give a scarey old lady a third extension on her loan. The old woman gets highly pissed off, “I beg and you shame me!” The old lady attacks Christine in a parking garage and curses her. My fifteen years old is currently learning to drive, and was particularly scared by that scene. Soon after, Christine starts seeing shadows and hearing noises.

After being too scared, Christine goes to see the old woman and beg her to remove the curse. She ends up knocking a corpse on top of herself with formaldehyde pouring out of it’s mouth and into hers. Another scene has Christine get attacked in a garage, but lucky for her the attacker is standing right under an anvil. Doesn’t everyone have an anvil suspended in their garage? My favorite scene is when Christine digs up a grave and it fills with water. She ends up swimming in a muddy grave with a corpse.

Most events announce themselves long before they happen. At one point, Christine is told to make an animal sacrifice to appease the demon. A few scenes earlier we were introduced to her new kitten. Its not long before we have Christine walking around her house with a butcher knife saying, “Here kitty, kitty...” Another scene has Christine meeting her boyfriend's parents for dinner. She brings a homemade harvest cake. Gee do you think something might happen with the cake? There is an even bigger plot twist that is announced early in the film, but I will leave it for you to discover.

With banks being the current evil in the world, writers Sam and Ivan Raimi include a scene where Christine apologizes to her boyfriend about how she should have given the old evil witch a third extension on her loan. After all, in this modern world, people who stick by rules and regulations are bad, and those who do not are just innocent victims of their own incompetence.

Last, but not least: what the hell is Justin Long doing in a supporting role of a “B” horror movie? Does he think there are that many Jeepers Creepers fans out their pining for him to make another horror film? Long is a great comedian, who has stolen many scenes from very famous actors. He should stick to what he does best. 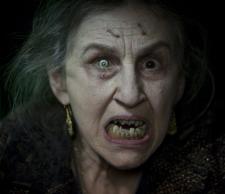 When the scary old gypsy lady with magical powers asks for a loan extension, you give it to her.

She doesn't apologize because she didn't give the old lady a loan. She apologizes because she lied when she said it was her manager's decision when really it was her own choice to not give the old gypsy an extension. I think saying this movie is making any kind of commentary on anything is a stretch, even for you Eric.

I do agree with you that the trailer for this movie sets a different tone than the movie. Clearly this is meant to be an over-the-top horror film with many of the action scenes being played for laughs. That it manages to provide a few scares along with the laughs is a testament to writer/director Sam Raimi. Any doubts that this movie was meant to be a comedy is immediately removed when the old lady attacks Christine in her car and Christine staples one of the old ladies eyes shut and when the old lady starts gumming Christine's chin. It's a scene that is both gross and hilarious.

Just what Justin Long is doing here is indeed a mystery. Maybe he was just happy to be offered a part where he got to play a serious grown-up. Either way though, anyone could have played his part and his comic presence is completely wasted. I also thought it was funny (and intentionally so as everything is in this movie) how he was never around when something supernatural was happening.

Sure, certain moments are telegraphed way ahead of time. You just know that the coin Christine gives Clay at the beginning of the movie is going to come back into it, but I do have to say that it wasn't in exactly the same way that I expected. Despite certain events being obvious there are still some genuine shocks and scares to be found as well as quite a few laughs.

Maybe it helped that I went into this movie knowing that it was supposed to be funny. In any case I certainly seemed to have enjoyed it more than you Eric. 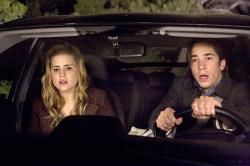 I was thoroughly entertained by Drag Me to Hell. The title itself is pretty campy so I wasn’t at all surprised by the over-the-top gross-out humor. Eric, you mentioned a couple of ridiculous scenes like Christine sacrificing her kitten and the suspended anvil. What about when her nose starts projectile-bleeding what seems like gallons of blood at her desk at the bank in front of many people and no one acts like they are witnessing an incredible medical phenomenon? If I lost that much blood I think I would go to the hospital but Christine just wipes her nose on her sleeve and goes to beg forgiveness from the old witch.

Apparently Justin Long needed a paycheck as his part is pretty much a series of him consoling Christine and assuring her that she isn’t going crazy. That is until he suddenly starts believing that she is being stalked by a demon even though, as has been pointed out already, he never actually witnesses anything supernatural.

The biggest laugh for me comes when Christine is having dinner at her boyfriend’s parent’s house and she suddenly jumps up, throws her glass at a door and screams, “All right, I hear you, now leave me alone you Bitch!”

Drag Me to Hell is destined to become a cult classic. It is the perfect movie to see as a high school kid with a bunch of your friends. But it can be enjoyed by anyone with an appreciation for gross-out shocks that are meant to amuse as well as scare. The ending was perfect.