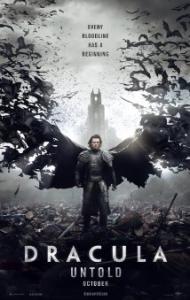 Director Gary Shore makes his feature film debut reviving one of the most popular characters in movie history. Count Dracula's been missing from the big screen for a while now, having been temporarily replaced in popular culture by the Twilight brand of teenybopper vampire. In fact this is the first big budget Hollywood movie featuring the world's most famous blood sucker since Dracula 2000 came out 14 years ago. Dracula Untold is an origin story that mixes historical truth with the Dracula legend. In visual style it resembles 300. It's closer to the fantasy/action genre than a traditional horror film.

In 15th Century Transylvania, Vlad the Impaler goes to extreme measures to protect his family and his kingdom from the overwhelming forces of the Ottoman Empire. He seeks out a demon living in a nearby mountaintop cave. This demon turns out to be a cursed vampire, whose identity in life was the Roman Emperor Caligula. This vampire gives Vlad some of its blood to drink, telling him he will be infused with the powers of the night for three days. If at any time during those three days, he gives in to the temptation to drink human blood, he will forever remain a vampire, while at the same time freeing Caligula from his cave prison. If Vlad manages to resist drinking blood, he will return to his mortal state when the sun rises on the third day. Got it?

While I enjoyed this movie I had a slight problem with its portrayal of the titular character. This is a noble Count Dracula. Sure he's a bloodthirsty warrior renowned for impaling his enemies on stakes and leaving them on display for all the world to see, but he's also a faithful husband and attentive father. His actions are selfless throughout the story and even in the final scene it's clear that he's one of the good guys. Where's the fun in Dracula being a hero?

The tall, dark, and handsome Luke Evans physically inhabits the role with ease. He acts properly tormented whenever the scene calls for it even if he lacks the larger than life hypnotic charisma normally associated with Count Dracula. The entire film has a somber tone that a bit more humor could have enlivened without camping it up too much. In one of the very few attempts at levity Vlad quips, “That's useful.” when he realizes how fast he heals with his newly acquired powers. A few more jokes of this sort would have been welcome. Dominic Cooper as the Turkish Emperor, and Charles Dance as the Master Vampire, are the only ones in the cast with a twinkle in their eyes, everyone else is deadly serious.

The special effects are decent but certainly not groundbreaking. The ending sets up a sequel that will likely happen if the box office performance of this movie warrants it. I will probably see it if it gets made. This isn't your grandfather's Count Dracula. He's more superhero than monster but if you can get past that he's still an entertaining creation. Despite its flaws, Dracula Untold proves there's life left in the undead. 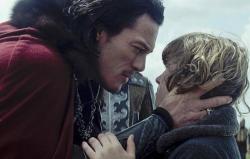 Although Patrick mentioned the Twilight brand of vampire, both that series and this movie owe a debt to Anne Rice. Dracula is traditionally portrayed as the villain, but here he is the tormented anti-hero more akin to Rice's Lestat in personality than anything Christopher Lee ever played. It's not a bad way to portray him, but traditionalists should be warned that they, like Patrick, might not like this version of the Count.

Perhaps the film's biggest casualty of making Dracula the hero is that it removes the horror element of the story. Dracula is no longer someone to be feared, unless you're threatening his family or his country. As Patrick noted, this is an action fantasy rather than a horror movie. The action is fairly well done, if heavily CGI, but when audiences go to see a movie about Dracula in the weeks leading up to Halloween, it's probably a safe bet that they're expecting some thrills and chills. The only moments that approach the realm of horror here, are those in the cave with the Demon who transforms Vlad into Dracula and even he's more creepy than truly scary.

Luke Evans looks the part and he's a fine enough actor, but again agreeing with Patrick, he lacks the charisma this character needs. While not horrible by any means, he's too serious and too grim when he should be a bit more flamboyant, charismatic and just a touch over the top. Although to be fair to Evans, his portrayal can probably be partly blamed on the script and the director.

As I said, Charles Dance as the Master Vampire is the film's most creepy element. I wanted to see more and learn more about his character than the film provides. After the initial transformation occurs, he almost completely disappears from the story. The hinted at sequel in the film's epilogue seems to indicate that he might play a part in future films (if they're made), which makes them sound more intriguing.

Universal Studios have talked for years about reviving the old monsters from their classic films of the 1930s and supposedly this is just the first of many. A new version of the Mummy is in the works and Alissa Phillips, the producer of this film, has even indicated that there may be some crossover between the different characters and we might see a Dracula cameo in that film. Perhaps Universal is taking a page out of Marvel's playbook and intends on creating a monster style Avengers series where the horror characters appear in individual films as well as films where they all appear together. Although obviously that depends on the success of this movie, which so far has been weak with the critics and only so-so at the box office. It should also be noted that I, Frankenstein, which flopped earlier this year was not produced by Universal and is unconnected with Universal's planned Monsters' Universe.

While I might sound a bit negative about this film, I did enjoy it. It's action packed and at just 90 minutes, it breezes by. It's just that when you use the name Dracula, it sets up a certain expectation with audiences and it's an expectation that this movie doesn't fulfill. If you can get around the idea that this Dracula isn't evil, but rather a tormented soul, fighting against his blood sucking nature then you'll likely have a decent, if not spectacular time, while watching it.

My brothers nailed this film's problem on the nose. The portrayal of Dracula is off. As they wrote, this Dracula is a romantic tortured soul but not at all a monster, as the movie continually tells us he is. As Patrick noted, Dracula Untold wants to have it both ways. We are first shown that as a warrior he impaled thousands of his enemies on pikes for all to see. Then he is shown as a tender lover to his wife. Then we see him gently tell his son to, “Run to your mother.” So he may kill a garrison of Turks who threaten to take the boy away. The scenes between him as a one man army destroyer and the ones of him comforting his child are too jarringly opposing.

For this character to seem at all realistic, he had to be portrayed in a much darker way. Vlad’s reputation as a killer came long before his transformation into an immortal demon child. He is carrying in his soul the death of countless men. He should have been played as a man who constantly lives in a spiritually dark place, and whose only rays of light are provided by the innocence and purity of his wife and child’s love.

As my brothers wrote, Luke Evans looks the part and “acts” tormented at times, but he lacks the true anti-hero charm this movie is going for. Vlad/Dracula should always seem threatening and unnerving to anyone he comes close to. He acts too nice here and, as Patrick asked, what is the fun in that? Vlad has killed far too many people to come across as a man you could do lunch room supervision duty with at an elementary school. Seriously, this vampire is about as scary as the Count from Sesame Street.

Another problem I had with this movie is the editing. When the priest reveals that Vlad is a vampire by cutting a hole in a cloth wall everyone in the square suddenly knows what happened, even though no one yelled, “Hey everyone, look inside that cloth hole and see Vlad’s skin dry up as the sun is killing him because he is the undead.” They just know. In another scene, Vlads wife and son are in a tower in a castle on a mountain, with the Turkish army, led by Mehmed, in the valley way below. The son gets taken away just before Dracula flies up there in bat form. His wife then falls off the tower. Dracula flies down to catch her at a very rapid pace. Somehow, his son is already down from the tower, out of the castle, down the mountain and on the back of Mehmed’s horse, some good distance away. Huh?

When Dracula does battle with Mehmed, he does so at a disadvantage as Mehmed has spread the floor with silver coins that weaken Dracula much like Kryptonite does to Superman. Okay, but how in the hell does Mehmed know to do that? We are told that the Master Vampire has been trapped in that cave for an eternity and everyone who enters dies, so how would such information get out?

I believe the writers were far too concerned with recent depictions of vampires to treat this portrayal as it should have been. This movie should have taken its cues from Bram Stoker’s Dracula, who is lovelorn but also very much a beast who thirsts for human blood. You relish his Dracula’s immortality all the while fearing you may be his next victim. Patrick called Luke Evans’ Dracula more superhero than monster and I thought the same thing when he controlled the bats much like Batman did in Batman Begins (2005). Like Scott though, I will give his portrayal some pass as much blame also belongs to the writers and director. 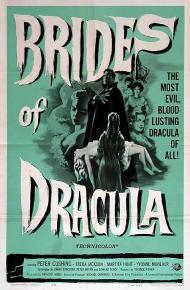 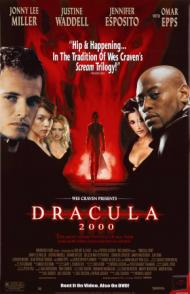