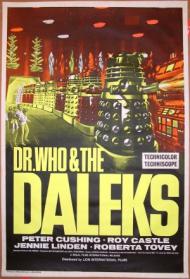 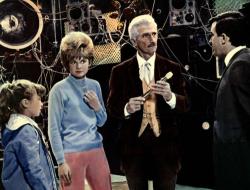 Roberta Tovey, Jennie Linden, Peter Cushing and Roy Castle in Doctor Who and the Daleks.

Doctor Who, the long running BBC science fiction series, debuted 50 years ago from the time of this writing, in 1963. Its second story featured the debut of the series' most famous villains, the robotic Daleks. Soon, the metallic voiced, psychopathic pepper pots, were rivaling the Doctor in terms of popularity, spawning a huge line of merchandise. To capitalize on this "Dalekmania", two theatrical movies were produced. Dr. Who and the Daleks, based roughly on that second story from the series, was the first of the two.

Wanting to attract new audiences as well as fans of the series, the producers decided to make the movie a stand-alone affair and so changed some key elements. Instead of casting William Hartnell, the actor playing the Doctor on television, as the Doctor in the movie, the producers went with Peter Cushing because he was deemed a bigger name. And rather than having the Doctor be a mysterious alien, he was written to be an absent minded professor from Earth. Other changes included making both Susan and Barbara, characters from the show, the Doctor's granddaughters, while Ian went from being a serious minded, chemistry teacher, to Barbara's bumbling boyfriend and the source of comic relief.

After the characters are introduced, the plot of the film follows the series more closely. The Doctor, or Dr. Who as he is literally named here, has invented a time/space machine and while showing it to his granddaughters, Ian bumps into a lever by mistake, sending the Tardis (as the ship is known) hurtling through time and space to a mysterious, dead planet. On this planet there are two races of beings. The Thals, a group of very 1960s looking hippies with lots of eyeliner and really bad haircuts, are one group, while the warlike Daleks are the other. As in the series, the Doctor is soon caught up in the affairs of another world.

Over the years Doctor Who has developed a grown-up following and the producers of the show have changed the series to please that older audience, but originally it began as strictly a children's show and this movie is very much in that vein. The comic relief, mostly provided by Ian, is of the silly, slapstick variety. Although there's some action and even death, there's no blood or serious tension. Despite being transported to another world, none of the characters act in anyway impressed or surprised. They simply accept it with a shrug.

Despite their popularity, the Daleks have always been slightly silly villains. They're a very awkward shape and as many comedians pointed out over the years, a simple staircase would be able to cause them difficulties. At least in this story, their shape and weakness makes sense. Their robotic shell is there to protect the lifeform inside from the planet's radiation, while they draw their power from the metallic floors of their city. Despite future stories with the Daleks taking place all across the galaxy, their shape from this first story became such a part of them that their design has never really changed.

One of the big draws of the movie at the time of its release was that it was in color and on the big screen, while the series was still being produced in black and white. Watching it today, what once seemed new and exciting, now feels very dated. The Thals just scream "1960s" and the Daleks' control room looks like a Ken Adams' designed Bond villain lair.

Although it was made to attract a new audience, this is a movie that's really only ever going to be of interest to fans of the original Doctor Who series. Its entertainment value to those unfamiliar with the show is bound to be limited at best.

An action scene in Dr. Who & the Daleks.

I'm aware of Dr. Who only because of my brother Scott. I watched the series with him a few times back in the mid-1980s but retain only vague memories, and very few details, about the show. I am definitely not its target audience. My brother is correct that the entertainment value of this movie is quite limited for anyone without a great deal of fondness for the long running television series.

Even though I didn't regularly watch the show it still bothered me that they made The Doctor an Earthling for this movie. Not that it matters all that much as far as the plot goes, but it does lessen his mysterious persona. Peter Cushing is fine as the absentminded genius and the one thing he does have in common with the tv doctors (if my memory is correct) is the fact that none of them ever panic no matter how dire a situation appears. When they first arrive on this petrified planet they all scamper eagerly about without the slightest sense of danger.

The pacing is great however. It jumps right into the action within the first few minutes and the entire thing runs less than 80 minutes. I like movies that take the viewer on a journey and this movie does that. I wasn't sure what was going to happen next. Well, at least until the Daleks showed up. And speaking of Daleks, I had no idea how popular they were in the mid-1960s. Dalekmania even met Beatlemania at the movie's premier at Cannes. A famous photo of John Lennon with a Dalek made headlines with the caption, “Beatle John Lennon meets Dalek.”

Scott mentioned the swingin' sixties look of the Thals. They not only look like hippies but they behave like them too. They are passive and refuse to fight the Daleks but think nothing of taking free food handouts from them. The wise Dr. Who tricks the leader of the Thals into fighting by pretending to give his girlfriend to the Daleks to experiment on and thus demonstrating that some things are indeed worth fighting for.

Dr. Who and the Daleks is incredibly dated but as a curiosity it's worth a look.

Roberta Tovey, Peter Cushing and Roy Castle in Dr. Who and the Daleks

I never watched the Dr. Who episodes from the 1960s so I am not sure what traditions had been established at the time this film was released. The first thing I missed was the classic Dr. Who theme song. The next was the Dalek’s notorious battle cry, “Exterminate!” The worst decision was to make the Doctor an Earthling. I am not sure why they did it but I am guessing that making him an inventor was easier to explain than his Time Lord history.

Patrick found Peter Cushing’s doctor similar to the television doctors as he never appears to panic. With a few wonderfully dramatic exceptions in the show, that statement is mostly true. In fact, those occasional losses of composure by The Doctor are some of the better moments from the show. Several in fact, were a result of a conflict with some Daleks.

There are many tried and true Dr. Who plot elements here. The Doctor and his companions seemingly land on a planet out of some random happenstance. As Patrick noted, they all move about exploring a strange and potentially dangerous place, without the slightest concern. As Scott pointed out, the Doctor is soon caught up in the affairs of another world. Those last three sentences just described 90% of every "Doctor Who" episode.

Dr. Who and the Daleks is dated but it also has an anti-nuclear war message. The planet the Tardis lands on is dead due to an atomic war. The Doctor and his companions even get radiation poisoning. I also like the message that sometimes you have to fight for your survival even if it is not something you are accustomed to.

As I was watching this, my 20 year old walked into the living room and asked, “Is this some kind of old Disney kid’s movie?” You could very easily picture Haley Mills and Tommy Kirk running about the Dalek complex. This is a family friendly film but I prefer the Daleks when they are more ruthless. One of my favorite television episodes was “Resurrection of the Daleks.” It features a rare companion moment when Tegan (Janet Fielding) left the Doctor (Peter Davison) after the Daleks brought death and destruction.