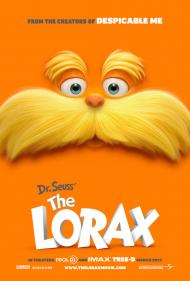 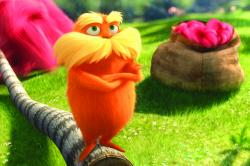 Danny DeVito is The Lorax.

I have a very strong memory of the CBS television version of this story from 1972. What sticks with me most from it is the little orange Lorax standing up and yelling, "I am the Lorax, I speak for the trees!" It was noted at the time for being a children's story with a message, in this case, an environmental one.

The problem with adapting any Dr. Seuss book into a movie is that they are short children's stories and they need to be padded to fill up a 90 minute running time. Even the 30 minute television version had to add songs just to stretch the story that far. The movie takes a different tack, although it too includes songs. It fills up the time by giving a backstory to the little boy who visits the Once-ler's house at the far end of town where the Grickle-grass grows.

Zac Efron provides the voice of the boy, Ted, who visits the Once-ler to find out what happened to all the Truffula trees. Ted is there because Audrey (Taylor Swift), the girl he has a crush on, wants to see a real live tree and the town they live in, Thneedsville, doesn't have any non-plastic ones.  The Once-ler tells Ted the tale of how when he was a young man, he arrived in this valley with the plan to make thneeds. He found a virgin paradise filled with trees and adorable animals. At first he made friends with the animals, but once he chops down the first tree to make his thneed, a little orange furry creature appeared, calling himself the Lorax (Danny DeVito), and claiming to speak for the trees.

In the original book and in the television special, the Once-ler (voiced here by The Hangover's Ed Helms) is never shown in full. We see his arms only. This was because he was meant to be the personification of industry instead of an actual person. In the film he is shown to be an insecure young man from a dysfunctional family. Once his thneeds start selling, he doesn't hesitate to expand his business and start seriously chopping down the trees and driving out the wildlife.

While the original story and television special kept their aim on the environment, the movie throws in some anti-capitalism as well. No doubt in an effort to court the Occupy Wall Street crowd. One of the forgettable songs is sung by the Once-ler and is basically all about greed. This is very different from the television version which features an exchange between the Once-ler and the Lorax about what does the Lorax want the Once-ler to do, fire 100,000 workers? That doesn't sound very good for the country, he says, to which the Lorax replies that he sees his point of view, but doesn't have an answer for him.

Mr. O'Hare is the villain of the story. He runs the town where Ted lives and sells clean, plastic bottled air. The last thing he wants is for trees to come back and provide it for free. His main purpose though is to provide an excuse for a little action as he and his goons chase Ted, Audrey and Ted's grandma (Betty White) around town.

There are some funny and cute moments in the film. In fact, if you lifted out all of the songs and Ted's portion of the story (you know, if you just kept the bits that were actually in the original book), then I would have enjoyed this film. When the Once-ler meets the animals of the forest and his interactions with the Lorax are the funniest parts. The way the story is structured now it might as well have been called The Ted because the Lorax is only in about a third of it.

Dr. Seuss was a prolific and well loved author. I've yet to see an adaption of his work that really lived up to the original. He was so prolific that his books have sold over 222 million copies. How many trees were chopped down to print all of those, I wonder?

Everything starts with a seed.

The Lorax movie is an anti-capitalist lecture masked by animation. The theme boils down to a greedy person/industry destroying nature to make money. It shows the extreme view of both sides of the environmental issue. On one side we have big business, that will stop at nothing to make a buck. On the other side we have a magical creature called a Lorax and fish who walk on land and sing. The two opposing views could not be any further apart.

Never is a suggestion of compromise even made. We are shown that big businesses are run by greedy morons. What idiot destroys his entire financial crop? While the environmental side of the argument just shows some cute little creatures. Would not a better ending be that we can have both businesses and a healthy environment at the same time, instead of just one or the other?

The most entertaining aspect of The Lorax is the animation. It takes full advantage of the medium. From  chases through the detailed city to the colorful landscape, the film is visually engaging. One of the more creative visual bits is when the tiny Mr. O'Hare exits or enters his car with his two body guards providing their hands to act as stairs.

As Scott wrote, the plot is bloated, most notably with songs. The Let it Grow song is groan inducing. At best, it may inspire a kindergarten class. My favorite scene is when the Once-ler's bed is placed in the water with him in it, providing the film's most whimsical moment. This film needed more moments like that and less speeches like, "Unless someone like you cares a whole awful lot, nothing is going to get better, it's not."

This is how it starts.

Eric, you asked, “What idiot destroys his entire financial crop?” Well it happened in this country by the logging industry. 90% of the original virgin forests that covered much of the lower 48 states in 1600 have been cleared. During the 1800s loggers clearcut all the trees in a forest and then moved on to the next forest with very little thought for the consequences to the environment or what they would do when the last tree was cut down. Even today in the Pacific Northwest about 80% of forestland is slated for logging, to say nothing of the incredible rate at which tropical rainforests are currently being destroyed by man. The Lorax exaggerates to make this point but it certainly has precedent.

Capitalism thrives on greed. It is in its very nature. Anyone who starts a business does so with the idea that they want to make as much money as they possibly can. Now it doesn't take a genius to understand that you cannot have infinite expansion in a finite world. At some point you have to stop increasing your production. Capitalism requires regulation the way sports need referees.

Now for the movie. I really wish they would stop making feature length cartoons out of simple little Dr. Seuss fables. Like How the Grinch Stole Christmas, The Cat in the Hat and Horton Hears a Who before it, The Lorax pales in comparison to the original story and subsequent half hour cartoon version. But The Lorax stands alone as the absolute worst remake of the bunch. It is preachy and heavy-handed, lacks creativity and humor, and the songs are eminently forgettable. The whimsical poetry and poignancy of Dr. Seuss is entirely missing.

Note to Hollywood: I'm begging you please, please, please stop churning out these travesties of once great stories just to make a buck. This movie is disgusting in its hypocrisy.  It rails against capitalism but at the same time its aim was to earn as much money at the box office as possible.  All of its profits should have gone to environmental causes.