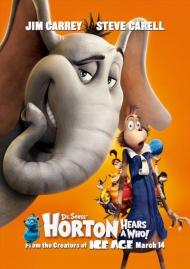 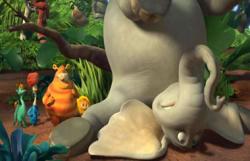 Horton Hears a Who.

Horton Hears a Who is a story that could be taken in many different directions. The essence of the story is that Horton, and by extension all of us, can believe in something that we cannot actually see or touch. This could have religious connotations or it could be simply about using your imagination. Hollywood is not going to put together a movie that actually supports any sort of religious belief, so it predictably takes the imagination route.

One day in the jungle, an elephant named Horton hears a voice coming from a dust particle on top of a flower. Horton is a teacher. His students all instantly believe him about the voice coming from the speck on the flower. They all follow his lead and carry their own flowers with them. One student has my favorite line in the movie when she describes the world on her flower. "In my world everyone is a pony, and they all eat rainbows, and poop butterflies."

Carol Burnet plays a dissenting Kangaroo who proudly announces to the other mothers that she home schools her child. For whatever reason, she hates the fact that Horton has all of the children believing his story about hearing a voice. She cons Vlad, the evil vulture, not the bunny that brings cookies, to steal the speck and destroy it.

Horton must avoid Vlad, the Kangaroo and some banana toting monkeys to get the speck to a safe location. Meanwhile, the occupants of the speck are those Christmas loving Whos from Whoville. Sadly, no mention is made of the Grinch. The Mayor makes contact with Horton and he has the same problem of trying to convince his townsfolk that he is in contact with a being larger than they can comprehend. He also has 96 daughters and one angst filled son.

The makers of this film could have easily gone with subtle references to God. Someone believing in something that cannot be seen or felt, which motivates them to do something good is just ripe with religious symbolism. But who am I kidding? This is a Hollywood movie, where swearing, sex, nudity, drug use and anti America themes are always welcome but not religion, unless it is being blamed for something.

This movie could have been political. A teacher is code for a liberal and a person who home schools is obviously a conservative. They dissagree with each other and the teacher is, of course, shown to be in the right. (or is that left?) You are probably thinking that I am trying to read way too much into this children’s story, but I disagree. Dr Seuss’s books were about getting children to think. The Cat in The Hat is about imagination and Green Eggs and Ham is about trying new things. This movie never really says why anyone cares about what Horton does or does not hear. Greater religious or political subtext could have added immensely to this otherwise forgetable film. 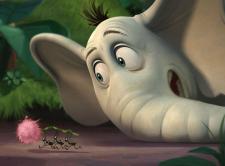 Clearly the makers of this movie were making a statment.

Eric, have you become so accustomed to Hollywood's liberal leanings that you actually don't see how this movie is the exact opposite of that? The Kangaroo doesn't represent the right and Horton the left, it's the exact opposite! Clearly Horton believes in something because he has faith, while the Kangaroo insists that if it can't be seen or heard, it doesn't exist. And the Mayor of Whoville, hearing a voice from the heavens that only he can hear and who is warned by this voice of a coming apocalypse that he must save his people from, is clearly reminiscent of the bible! There's religious subtexts running all through this movie.

Having said that though, you could also ignore the subtext completely and still find a little to enjoy here. Not a lot, but a little. There are some funny moments and the animation, while not ground-breaking, is still pretty good and is amazing when it comes to the three-dimensional qualities of it. Horton truly seems to have depth and form, as do the other animals. The Whos seems a little flatter, but the jungle scenes are very well done.

Part of the problem with this story is that there's just not that much to it and bits of it feel like padding. One scene has Horton imagining he's in an anime cartoon that is neither funny or entertaining, but does add a couple of minutes to the running time.

Another thing this movie does is have famous and semi-famous actors voice all of the parts. There's nothing wrong with that, but I wish more time was spent on a good script than on casting. Yeah, sometimes it's fun to try to guess whose voice that is, but given a choice of recognizing a voice and being entertained by a good story, I know which I would chose.

I'm still amazed Eric that you thought this movie carried a Liberal message. About the only way this one could have been more conservative is if it used the line, "A person's a person, no matter how small." to mean fetuses and made the movie an anti-abortion themed one.

Horton hears a Who. He does not imagine it or take it on faith.

Wow, you both missed the boat on this one. First of all it has nothing to do with faith. Horton actually HEARS a Who. He has conversations with them. He isn't pretending or undergoing a spiritual epiphany. He is like a scientist making a new discovery, like saying the earth is round for example. The message is to remain open to new possibilities but it never says to accept them on blind faith. Once the other animals stop and listen for the Whos they are able to hear them because they exist.

Although this movie does have a decent amount of humor it is not as good as the old 30 minute cartoon version. But then I have yet to see a full-length Dr. Seuss adaptation that improved on the old cartoon. And every animated movie these days uses the same formula. There is the fast talking, somewhat hapless main character who makes witty asides and pop culture references for the adults, and then has slapstick adventures with a usually diminutive sidekick for the kiddies.

The voice over work is terrific though. Jim Carrey, Steve Carell and Carol Burnett are a very talented trio. The ending musical number when the entire cast sings an inspired rendition of “I Can’t Fight This Feeling Anymore” leaves a smile on your face. But honestly I recommend you watch the older shorter version.