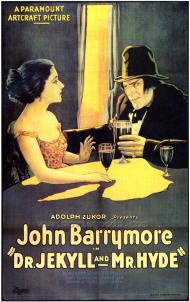 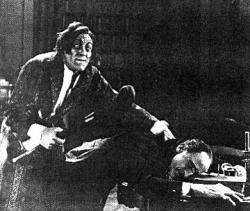 The evil Mr. Hyde at work.

One of the earliest screen adaptations of the often filmed Robert Louis Stevenson story, Dr. Jekyll and Mr. Hyde, released in 1920, is considered to be the first true American horror film. It features a tour de force performance by the legendary John Barrymore as the title character(s). His Mr. Hyde would create the mold for all screen versions (including cartoons) that followed. The stooped over posture, creepy stare, huge grasping fingers, long disheveled hair and horrible teeth. Barrymore plays the part with such gusto and physical energy that he carries the entire movie.

The story concerns the noble Dr. Jekyll a wonderful humanitarian who runs a free health clinic for the poor and destitute citizens of late 19th Century London. One evening he is cajoled by a more jaded colleague into patronizing a low class dance hall where he is tempted by the sins of the flesh for the first time.

This piques his curiosity and he begins work on a secret formula to isolate, bring out, and hopefully control, the baser side of man’s nature. He succeeds in creating an alter ego known as Mr. Hyde but is less successful in controlling his newly created persona. Eventually Mr. Hyde threatens to take over his very existence.

The costumes, sets and visuals of the movie are picture perfect. From Dr. Jekyll’s shiny top hat, cape and walking stick, to his fancy drawing rooms, to his laboratory, to the narrow cobble-stoned streets, to the seedy interior of the dance hall and the squalor of an opium den, Victorian London has rarely been more vividly recreated.

Silent screen femme fatale Nita Naldi has a small but important role as the mysterious Italian dancer/singer Mr. Hyde meets and moves in with. She possesses a ring designed to hold poison. Hyde uses her until he grows tired of her presence and then cruelly throws her out into the streets.

The creepy atmosphere conjured up contains many of the elements that would become iconic in horror movies. The fog filled London streets, the looming shadows, the mad scientist’s laboratory are all archetypal. But most important of all is John Barrymore’s absolutely brilliant acting.

Every Mr. Hyde or werewolf transformation scene to come would owe a debt to Barrymore’s performance here. It just might be the most impressive characterization I have ever seen in a silent movie. Other than the prosthetic fingers and bad teeth, he uses little make-up to achieve these effects. More than anything else he ACTS the changes that take him from mild mannered Dr. Jekyll to the sensuously sinister Mr. Hyde.

Dr. Jekyll and Mr. Hyde was the first major Paramount production filmed at the then brand new Astoria Long Island studios. Thanks to John Barrymore this nearly 100 year old movie remains riveting entertainment and provides the basic template for nearly all American horror movies to come. 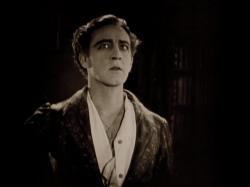 Although Patrick gushes over his performance, and a quick search online reveals that he's not alone, I found Barrymore's performance to be overwrought, melodramatic and more suitable for the stage than for a movie that allows for closeups. I suppose to some degree, it's about personal taste in acting and this is one performance that's not to mine.

While it's true that Barrymore used no prosthetics for his initial transformation into Mr. Hyde, as the film progresses the amount of makeup and prosthetics increases until even the shape of his head has been elongated. The more often he turns into the lecherous Hyde, the more twisted, hunch backed and made-up he becomes, the physical manifestation of his descent into evil.

The most interesting aspect of this story to me is that Jekyll's motivation for creating the serum that transforms him into Mr. Hyde, isn't a noble one. In other versions of the story, it's his desire to find a way to rid man of his evil side, but here he wants to be able to indulge his baser instincts without harm to his immortal soul. As he puts it, "Wouldn't it be marvelous if the two natures in man could be separated - housed in different bodies? Think what it would mean to yield to every evil impulse, yet leave the soul untouched!" Basically, he just wants to drink, sleep around and take opium without feeling guilty about it.

Released in the same year as Prohibition started in the United States, it must have been very easy to audiences of the day to see this movie as a metaphor for alcoholism. Indeed, you can still see it as such today, but given how hot a topic alcohol was at the time, it must have been even more obvious. Jekyll loses all of his inhibitions after drinking his serum and the more he drinks, the harder it is for him to stop, until he's obviously become addicted, much in the same way as for an alcoholic.

Is this really a horror film? I would argue that it's not. Hyde is a horrific figure, but there aren't really any scary moments. He walks over (literally) a small child and murders one man, but beyond that there's very little violence. Despite some macabre elements, this is a movie more interested in human nature than true scares.

This is one of those movie where the sheer fact of its age adds weight and respect to it. It may be important historically, but its entertainment value has diminished over the years. It's a movie that will be enjoyed more by those interested in the history of cinema than someone simply looking for an entertaining 80 minutes. 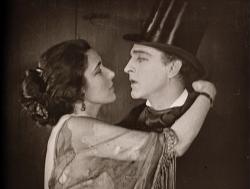 Many years ago I chose to read "Strange Case of Dr Jekyll and Mr Hyde" by Robert Louis Stevenson, for a high school British literature class because the novella, published in 1886, seemed like a quick read. Although this film tells the story in a different manner than the book, the central concept of a man with a chemically induced split personality remains the same.

In 2009 I wrote an article for this site titled, "The Male Libido in Early American Movies." I wrote how Hollywood struggled to express man's desire for sex on screen without making him seem like a moral criminal. In this film we find a man who wants very much to party without any guilt or repercussions. Scott wrote how this story was topical because of Prohibition. It was also a sign of the moral times by how it depicted sex as something dirty if done outside of marriage.

I agree with Scott that the transformation scene is "...overwrought, melodramatic and more suitable for the stage." However, like Patrick I still found Barrymore's performance to be quite good, especially in the subtle moments. Sex is never shown but when he looks at Nita Naldi, who shows a surprising amount of bosom, you know exactly what is on his mind.

As far as this being a horror film, I think that was the film makers intention. The mere sight of Mr. Hyde is a bit scary. The scene near the end where the girl enters the laboratory and Mr Hyde is waiting inside is very creepy.

Barrymore successfully plays two different characters here. Jekyll is the epitome of good. He thinks of others while Hyde only thinks of his own desires. The iconic characters so represent the broad spectrum of man that they have lived on through countless film remakes and references. Even this past television season had a short lived show called "Do No Harm," about a doctor with two personalities, one good and one evil.

Robert Louis Stevenson clearly struck a nerve with this story. Most men are born and raised to be good people, but along the way we are all tempted by things we know may cause us problems. This goes all the way back to Adam in the garden. Men throughout time have blamed women, alcohol and drugs for their loss of self control, when in truth the responsibility lies within us. Thus, all men have some amount of Jekyll and Hyde in them. It is up to each man to decide which one is in control.