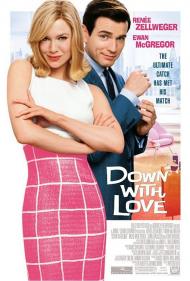 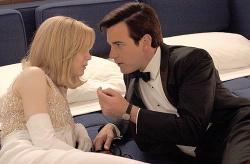 Renee Zellweger and Ewan McGregor in Down with Love.

Some movies just make you feel good.  You leave the theater with the happy reminder of just why you enjoy movies so much.  Down with Love, a tongue in cheek tribute to those old Rock Hudson/Doris Day comedies, is such a movie.

Barbara Novak (Zellweger), arrives in a highly stylized New York City in 1962.  Having just written a book about the empowerment of women titled 'Down with Love', she is anxious to publicize it.  She is naturally delighted when her new best friend and editor Vikki Hiller (Sarah Paulson) lands her an interview with Know Magazine's star reporter Catcher Block (McGregor), the notorious Ladies' Man, Man's Man, Man about Town.  What Barbara doesn't know is that Catcher only agreed to do the interview as a favor to his editor; Peter MacMannus (played to neurotic perfection by David Hyde Pierce), who is secretly in lust with Vikki.

The sets are all lavish, and the clothes over the top.  From Vicki's skyline view of Manhattan, which manages to encompass every landmark in the city, to Catcher's Playboy lifestyle, there's an idealized feel to the movie that is authentically how we'd like to think life was like in that time period. A feeling that's enhanced by the use of stock footage, including an appearance by the real Judy Garland performing 'Down with Love' on the Ed Sullivan show in an effort to promote Barbara's book.

With Judy's plug, Barbara no longer needs Catcher's interview to help sell the book as it starts flying off bookshelves around the world.  Catcher, who never wanted to do the interview in the first place, and who had been putting it off with a series of less than plausible excuses, is relieved.

It is only when the women in Catcher's life began reading Barbara's book and getting ideas of their own that Catcher begins to take it seriously.  In aid of all men everywhere and with the chance of nabbing another Pulitzer Prize, he decides to write an exposé that will show the world that all women (including Barbara Novak) really want is to find a man and a fall in love.

The movie plays up many of the conventions of the old movies.  Mistaken and hidden identities, split-screen images, and the 'closeness' of the hero and his best friend, so often used in the Rock & Doris movies are all here but with modern twists that they never could have gotten away with in those old movies.

While you might not expect a movie of this nature to feature much of a twist ending (it's a romantic comedy after all), you'll be surprised by this one.  In one hilariously long and improbable monologue, Barbara's last minute confession puts the olive in this movie's martini.

Proving that what once was old can be new again, Down with Love is funny and nostalgic.  It isn't exactly like those old 'sex' comedies, but like the time period, it is authentically how we'd like to remember them. 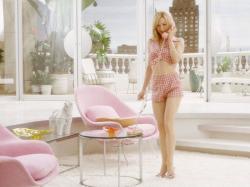 Renee Zellweger in Down with Love.

My favorite part of The Carol Burnett Show was when they would spoof an old movie. They would take an old plot and exaggerate it to the point of making fun of it while also making it funny. This is exactly how Down With Love worked for me.

Reed takes a time capsule of movie history and rips it open to show the absurdity of it. In Down With Love, he shows that those old romantic comedies were practically a farce. They were extremely unrealistic. This movie, as well as those old ones, are more about caricatures than actual characters.

Ewan and Renee are good here but not great. Renee, once again, is so thin and muscle shouldered that she looks too much like a modern woman who spends too much time at the gym instead of an early sixties gal. Ewan has the right hair style but lacks that lady killer presence to be completely convincing. Still, they both give such sincere, enjoyable performances that their very effort gives this movie most of it's charm.

Down With Love is worth a laugh or two; usually provided by Pierce. The problem is that it is so busy looking like an old movie that it forgets to be original. It attempts some originality near the end with a twist in the plot. However, it just makes the movie seem silly and dare I say it, stupid. Sure, romantic comedies usually have unbelievable coincidences, but this one takes it to a whole new level. Remember, the point of spoofing a movie is to make it look bad. Down With Love does the opposite. 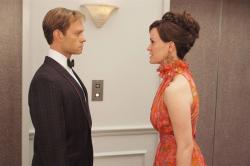 David Hyde Pierce and Sarah Paulson in Down with Love.

Like Scott, I thoroughly enjoyed this movie. It does pay a marvelously idealized tribute to the romantic comedies of the early sixties. The cast does a great job with the tongue-in-cheek material. Most notably Renee Zellweger. Her exaggerated mannerisms and walk are hilarious. The look of the movie is perfect. This is the New York of Breakfast at Tiffany's only, as Scott said, it is as we picture it in our heads and not as it really was. And the clothes are wonderful. The song and dance that McGregor and Zellweger perform is nifty and was probably not too difficult for either of them since they have both starred in the recent musicals Moulin Rouge! and Chicago respectively.

Neither of my brothers mentioned the inspired casting of Tony Randall in what would be his final screen role. He played Rock Hudson's sexually ambigious best friend in several of his movies with Doris Day. The part played here by David Hyde Pierce.

The funniest sight gag in this visually spot-on parody is the split screen telephone scene where it appears that Catcher and Barbara are having sex in an array of positions. And while the actual plot of Down with Love is not as interesting as its highly stylized look, it is nonetheless an amusing and creative homage to a more simple time.