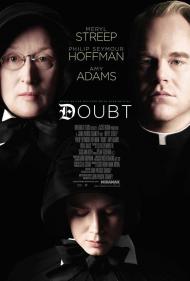 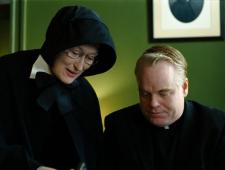 Streep and Hoffman square off

Doubt is the kind of movie that makes you think. It brings up questions of innocence and guilt, assumptions and perceptions, and what we know absolutely from what we merely suspect. Philip Seymour Hoffman is a progressive minded priest at a Catholic middle-school in the mid sixties and Meryl Streep is Sister Aloysius, the school’s principal. Amy Adams is a young nun and history teacher. She confides her suspicions to Streep involving Hoffman and a young male student who also happens to be the school’s first black child. Streep immediately assumes Hoffman is guilty and makes it her mission to get rid of him.

As an acting showcase Doubt leaves none about the talents of its cast. I predict three and possibly four acting nominations from the Academy next month. Streep and Hoffman are locks and I wouldn’t be at all surprised if Amy Adams gets one as well. The only question for her is will it be lead or supporting. There’s an argument for each. Viola Davis may get a surprise Supporting Actress nomination for her small but riveting role as the mother of the young boy in question. Her scene walking through the park with Streep is intense. And the things she reveals may surprise.

On the downside the movie never achieves cinematic maturity. It is very staged. What there is of a plot is a bit thinly spread. But it does have great dialogue and a scenery chewing confrontation between two of the greatest actors of our time. It also handles the central theme intelligently. The words pedophile and priest have made headlines together many times in recent years. The denouement may prove unsatisfactory to some but I thought it brilliant. You share Sister Aloysius’s anguish in the final scene.

The acting is excellent, if stagy.

Does Streep assume Hoffman is guilty and then decide to make it her mission to get rid of him or does she just seize upon the suspicion as a means of getting rid of him and his progressive ideas? It's that kind of question, the question of motivation each character has that this movie is good at presenting.

The thing that I think is brilliant about this movie is that it makes the person who is doing the right thing very unlikable and the person in the wrong very charming and friendly. You feel sympathy through most of the movie because despite the suspicions you want to believe that this person is doing the right thing and is not the person that they seem to be. There are other nice touches in the script as well. I like the use of symbolism; the wind and light bulb that keeps burning out being the most blatant examples.

While I appreciate Meryl Streep is a great actress and Hoffman a great actor, I do find that the acting style here is very big and old school over-the-top. They chew up the scenery when they go at each other in a highly charged manner, but in a heightened rather than a naturalistic style. You always know they're acting. You compare Streep's performance to Sally Hawkins' performance in Happy-Go-Lucky, and there's a night and day difference. Viola Davis and Amy Adams (who I love in everything) are also good, but again their acting style is very stagy rather than natural.

I expected there to be good acting in this movie, how could there not be with a cast like this, but I didn't expect to enjoy the movie as much as I did. It runs an hour and 45 minutes and is hardly action-packed, and yet it flies by in an enjoyable manner. 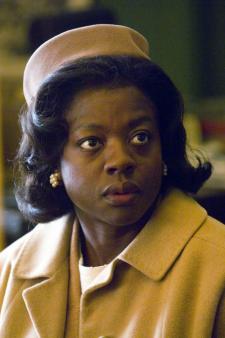 Davis plays one of the most questionable characters in film history.

The plot is very thin. The entire scope being that an accusation is made and an argument follows. The many symbolisms are appropriate. Scott mentioned several, and I will add the cat and the blind nun to that list. However, they seem more like filler, as they do not add to the plot.

The movies greatest strength is that it is told from three different perspectives. You see the situation from each of the sister’s point of view as well as the mother’s. You understand where each is coming from, and understand why each came up with their opinion.

I never found Sister Aloysius unlikable. She is the principal and thus the disciplinarian. The students are supposed to be frightened of her. It is how she keeps control. The plot tries to blur her motives by portraying her as old fashioned. I never once felt she was trying to get rid of Father Brendan because of his progressive ideas. I believe she would have dealt with the situation the same, no matter who the priest was.

What really stayed with me after watching this film is that it defends pedophilia. Whereas The History Boys showed the molester as harmless, this movie actually claims that the pedophile’s affections were beneficial to the child. As the movie is a mystery, we never saw the events from the priest’s or the child’s perspective. If we did, the movie would lose all of it’s intrigue, and Father Brendan would lose any sympathy you had for him. 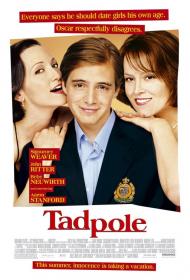