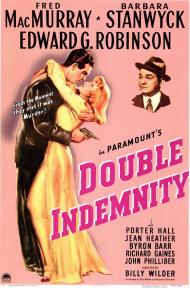 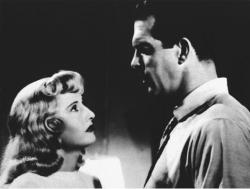 If classic forties film noir gets any better than this I've yet to see it. The setting, the sublime direction by Billy Wilder, the smoldering chemistry between the great Barbara Stanwyck and the sincere Fred MacMurray, the crisp dialogue, Edward G. Robinson and last but not least a plot to die for. Like Dinner At Eight this is a must see for any aspiring movie buff. Recently I had the pleasure of viewing it at the summer film festival held Monday nights in mid-town Manhattan's Bryant Park along with 10,000 or so other New Yorkers.

MacMurray is insurance rep Walter Neff who gets hopelessly consumed by the powerful charms of femme fatale Stanwyck's Phyllis Dietrichson. Together they plot to kill her rich husband and by making it look like a train accident the premium would be doubled, hence the title. Neff narrates the story, a device Mr. Wilder would use again successfully a few years later in Sunset Boulevard. The one flaw in their plot is the uncanny ability of Neff's boss, Barton Keyes, portrayed brilliantly by Edward G. Robinson, to smell a rat.

Barbara Stanwyck steals the show as the completely rotten Mrs. Dietrichson. This character has been credited with inspiring Sharon Stone's role in Basic Instinct. They are, after all, both beautiful blondes with a penchant for murder, an obsession with money and the ability to manipulate men. Only things were a bit subtler in those days. Whereas Stone is reduced to a cheap beaver shot, Stanwyck creates sparks with only her ankle bracelet.

Double Indemnity is highly entertaining melodrama best summed up by the studio's original tag line... From the Moment they met it was Murder! 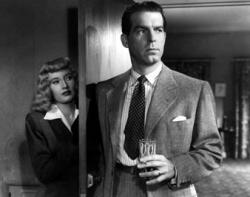 If classic forties film noir gets any better than this, someone please show it to me. Please!!!!!!

I didn't enjoy this movie nearly as much as Patrick did. What little enjoyment I did receive, was from a since of nostalgia, really. I was amused by the attitudes and habits of the times. The fact that everyone smokes everywhere, for instance, even in the grocery store.

I also enjoyed the over the top dialogue, filled with sexual innuendo. When Walter talks about the red hot poker in his pocket and how he had to rush home to take care of it, I burst out laughing. And just how many times, does he call her baby?

I suppose this is classic forties film noir, and if you're a fan of the genre, you will enjoy this movie, I'm just not a fan. 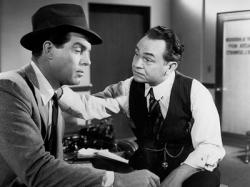 Scott, were you in a bad mood when you watched this movie? Were you even paying attention? Neff does not say anything about having a red hot poker in his pocket that he has to take care of. He says, "I knew I had a hold of a red hot poker and the time to drop it was before it burned my hand off." He is referring to Phyllis's murderous insinuations, not his erection. I think you should watch this movie again. And if you do, go ahead and count how many times Neff calls her baby. I am curious to know, but not so curious that I want to watch it over again right away.