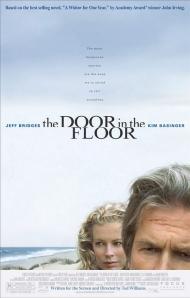 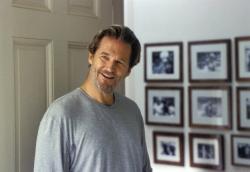 Jeff Bridges in The Door in the Floor.

When I first saw the previews for The Door in the Floor, I remember classifying it as one of those seriously depressing and pretentious human dramas. As it turns out, while the heart of the story is of a depressing nature, the movie also contains a humor that prevents it from ever becoming too pretentious and with a cast that universally turn in great performances. So much for judging a movie by its trailer.

The movie takes place over one summer on Long Island where seventeen-year-old Eddie has come to work as the assistant to children's author Ted Cole (Bridges). Ted has recently separated from his wife Marion (Basinger) and they share a complicated living arrangement where by they each stay alternating nights in their home with their four-year-old daughter.

As Eddie quickly discovers, there is a cloud of death hanging over the family, as both Ted and Marion are fixated upon the death of their two teenage sons. Marion has become almost catatonic, listlessly drifting through her life and becoming literally catatonic if the death of her sons is mentioned. Ted is extremely eccentric and is having a string of affairs with women he lures into his studio under the pretense of sketching them.

Over the course of the summer, all three of the main characters are changed. And while the movie is quite serious about the death of the Cole's children and about how it has altered their lives considerably, it also contains quite a few laughs. Ted's latest conquest, played by Mimi Rogers, is a mixture of humor and pathos, as are many of Ted's eccentricities.

A quirky movie, The Door in the Floor isn't easy to pigeonhole into one category or another, except to say whatever type of movie it is, it's a good one. 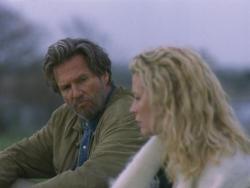 Jeff Bridges and Kim Basinger in The Door in the Floor.

The three characters in The Door in the Floor struck me by each of their very own selfishness. Most obvious and least sympathetic is Ted, who demeans women in his sketches. He hires Eddie not because he actually needs an assistant but because he knows he will act as surrogate son for him and most importantly his wife, Marion. Her selfishness is perhaps the most damning. She often ignores her daughter as she emotionally checks out of life. Her abandonment speaks volumes. Eddie is the most likable of the three. His youth excuses his self centered desires. He wants to work for Ted for what he can garner from his knowledge and experience as a writer. He wants to have sex with and lose his virginity to Marion even though she is married and detached from reality.

Ted and Marion are the best estranged married movie couple since O'Toole and Hepburn chewed up the screen in The Lion in Winter. Ted and Marion appear to no longer connect in anyway except that they have a history together. Even their daughter binds them not. However, they know each other better than anyone else. They each predict the other's actions to Eddie with exact precision. This is a couple that has a very strong bond constructed on familiarity, but they have each lost the capability to truly love anything. 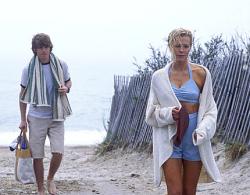 Jon Foster and Kim Basinger in The Door in the Floor.

After watching this movie I was sure that Eric would have gone off on a rant about the fact that it features sex between a middle-aged adult and a seventeen-year-old. Instead he wrote an insightful review summing up the dynamics between the three main characters succinctly. I also agree with Scott that The Door in the Floor meshes humor with drama quite nicely. The script is intelligent and sensitive and the cast all do excellent work. This is a highly satisfying look at one eventful summer in the lives of one family.

Near the beginning of the movie their young daughter Ruth makes a very telling comment about her parents, which shows she has a pretty good handle on the situation. She remarks that though her father is sad over the deaths of her brothers, her mother is much sadder. Tragically so in fact. Marion reveals to Eddie that she regrets having given birth to another child after losing her sons. She is just too broken emotionally now to ever invest the necessary love needed to raise a child.

To me Ted is the most selfish of these characters. You could say that he acts selflessly by letting Eddie have sex with Marion as a sort of cathartic form of therapy, but in reality he no longer seems interested in having sex with his wife so it isn't much of a sacrifice on his part.

Like Helen Hunt in The Sessions, Mimi Rogers proves herself fearless. She does several full frontal nude scenes as Ted's sketch model and she was pushing fifty at the time. Although she certainly doesn't look her age.

In one of the funniest scenes Ruth walks in on her mom and Eddie having sex. Ted later discusses it with Eddie in a very matter-of-fact manner. Ted: “From the sound of it, it was a rear entry position, not that I have a personal problem with that or any other position, but for a child, I imagine, doing it doggishly must seem especially animalistic.” Okaaay.

Also his attitude towards Eddie is at times quite condescending. Note the way he criticizes the young man's writing abilities. Eddie: “I was just trying to see if I could write something that seemed true.” Ted: “Oh, it seems true. It just isn't very interesting. It's sort of an emotional outburst, but it really isn't a story.” You might say the same thing about Ted's critique.

In theme this movie covers a lot of the same ground as 2010's Rabbit Hole. Only The Door in the Floor has more humor and far more sex. It kept my rapt attention right up to the symbolic final shot. 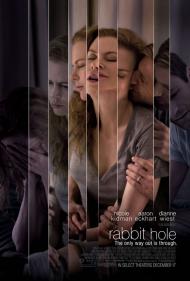