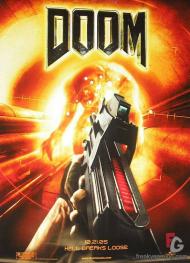 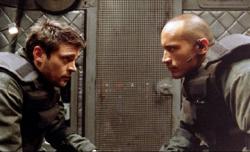 Karl Urban as Reaper and Dwayne

Based on the popular video game, Doom is an action-packed space horror movie along the lines of the Alien movies. It stars The Rock as Sarge, the bite-your-head-off leader of a special military response team. While this movie never met a cliché it didn't like, it at least keeps an even tone and does what it sets out to do, which is to entertain its target audience.

First we meet the crew. Unless you've never seen a movie before you will recognize all of the characters. There's the crazy screw-loose guy, the young kid on his first mission, the muscular jock, the religious poet, the levelheaded sensitive one, the hot-head who has never gotten over the childhood trauma of losing his parents. Oh and don't forget to throw in the hot babe, who in this case is the scientist sister of the hot-head.

So it's sometime in the future after a portal has been discovered which links Earth to Mars. Some scientists are digging for archeological info when all hell breaks loose. The Rock and his fellow marines are sent to save the day. From here it is mostly just nonstop action. The enemy turns out to be a synthetic gene, created by the scientists, that turns people into monsters but only, it turns out, if they are naturally evil. Those pure of spirit will become super fast and strong but otherwise retain their humanity. The movie never claimed to be plausible.

The Rock might just be the John Wayne of his era. He is larger than life and great at barking out memorable lines. Here's a sample from the movie, "Shoulder your fucking weapon, soldier!", "Kill them all, let God sort them out.", and my personal favorite, "Semper Fi, motherfucker!" What he does, he does well.

Karl Urban as Reaper in Doom.

Although Patrick called some of the lines "memorable" I will call them juvenile. Such lines as, "You know, you could of spent your life looking through a microscope instead of a sniper scope." and "Nothing gets back till everything on this planet is dead. We're going in hot." are not worth remembering.

Having never played Doom I knew nothing of the plot. That was hardly a problem though, since the plot boils down to simply shoot everything that moves. That may work for a game but does not make for much of a movie.

Although The Rock is the big star here, this movie belongs to Karl Urban. Urban has done some good work in small roles in such great movies as The Lord of The Rings: The Return of the King and The Bourne Supremacy. His character, John, is the only one who even starts to have a personality. He used to live with his parents and sister on Mars. His character's past could have added some depth to this extremely shallow film, but this movie is only about action and gore and not characterization, thus making this movie pointless. A game is about engaging the player into the actions of the game. A movie is about engaging the viewer with the emotions of the characters. Other than a few seconds of Urban's brooding, there is no characterization to be found.

Watching Doom is about as fun as sitting in your living room watching someone else play the video game. 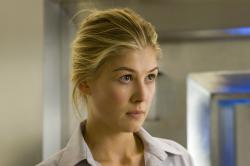 Well, I laughed at the "Semper Fi, motherfucker" line anyway, so I'd call it memorable.  There's not very much else that will stick with me though.  In spite of being mildly entertaining, this is just your basic Aliens rip-off with the name of a formerly popular video game franchise tacked on it.

The problem with making a movie based on a video game is when you try to impose a three act structure onto the episodic nature of the source material.  Doom, the game, isn't about plot, it's about giving you just enough background information so you know why you're shooting hordes of creatures.  The game also wasn't about character development as in the original game your character isn't even given a name or an identity beyond "nameless marine".  There's not a lot upon which to base a movie.

If you're looking for someone who looks like a videogame character, Dwayne "The Rock" Johnson is certainly a good choice.  Although they try to give each of the Marines at least one distinct character trait, The Rock's "Sarge" character is actually the least developed.  His motivations and attitude changes drastically halfway through the movie in one of the story's only plot twists, but for no very good reason.

While some of the action is good and the first-person sequence is a fun reminder of the original game, the movie never makes you care enough about the characters to really get drawn into the story.  Urban does a decent enough job, but it wasn't as if by the end of the movie I was on the edge of my seat to see if he or his sister survived.

Fans of the game series might feel some nostalgia while watching this (the original game came out in 1993), but other than that the best this movie is able to provide is B-movie level action.  You might not be completely bored by watching, but it's doubtful you'll ever want to watch it again.