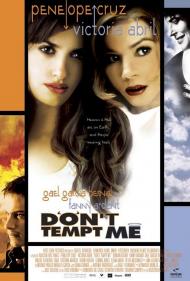 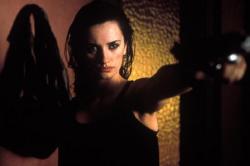 Penelope Cruz in Don't Tempt Me.

With Hollywood these days bloated with sequels hell bent on breaking the record for the most number of explosions and car chases in a single movie, Don't Tempt Me comes as a welcome relief. It's stylish, sexy, and wicked. Victoria Abril and Penélope Cruz light up the screen together as an angel and devil dueling over the soul of a brutish boxer, proving that two good actresses are worth more than an infinite number of explosions.

Heaven, Don't Tempt Me would have us believe, is a black and white vision of Paris, and who are we to argue. I've certainly seen worse visions of it. Despite its beauty and attractions like cabaret singer/angel Lola Nevado (Victoria Abril) Heaven, it seems, is still losing souls to Hell in worrying numbers. Hell is a corporation built upon a sweaty factory where the damned serve out their time on its various levels. On one of the lower levels is Carmen Ramos (Penélope Cruz), whose punishment involves acting as a waitress in a cafeteria straight out of, well..., Hell.

Heaven needs a soul to stay in business, so when a mother prays for divine intervention for her son, Marina D'Angelo (Fanny Ardant), the general manager of Heaven, decides to send Lola down to help him. Hell, not to be out done, sends Carmen to counter act her and to claim Manny's soul for their side.

Lola, with the use of a little heavenly power, is able to become Manny's wife. Carmen shows up posing as Manny's cousin. Manny, a boxer, has been warned never to fight again due to medical problems. Lola urges him to find a job and to write his mother whom he's not spoken to in many years. Carmen, meanwhile, does her best to urge Manny to go ahead and fight, hoping he will die quickly before he can redeem himself.

Lola and Carmen are both great characters. Normally, in a movie or a story involving Heavenly and Hellish creatures, one side or the other comes across as more sympathetic or interesting. In this case though, it is difficult to decide whom you want to see win Manny's soul. Lola is world weary and pure, nostalgic for the time period before she died. Carmen is sexy, edgy, and ready for a fight. It's a relief when part way through the movie, the two are forced to join forces to maintain the balance between good and evil, so you no longer have chose between them.

More often than not these days I find that movies are too long. If your movie is over two hours, you need to have a damn good reason for it. Don't Tempt Me, which clocks in at less than two hours, should have been longer. I want to know more about these characters, and not just the two female leads, but also the supporting characters in both Heaven and Hell. We are given tantalizing glimpses into the goings on there, but not enough.

When a movie leaves you wanting to know more and with the desire to visit its characters again, it's succeeded and Don't Tempt Me does both of those things. 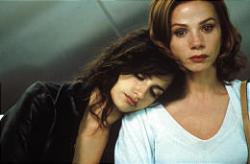 Penelope Cruz and Victoria Abril in Don't Tempt Me.

I enjoyed Don't Tempt Me but felt it was long enough. The characters are interesting but more information would have not fit in with this movie. It never explains how Lola becomes Manny's wife, or how she came to work at the grocery store. You just accept the unannounced changes.

If anything, the movie needed to be edited. Lola has two musical numbers that resemble a Rita Hayworth movie. Carmen has a solo scene where she dances to Kung Foo Fighting. Neither are integral to the plot but they do allow the differences in the women to shine.

A history between Marina and Davenport is touched on but never detailed. Scott may want to know more but that would have changed the movie too much. Besides, any movie about angels has to step lightly as it has to either bow to the rules of the Bible or create its own. Don't Tempt Me has its own vision of the afterlife and steers clear of actually mentioning God, Jesus or even Satan. Although the look is unique it does not attempt to rewrite the Bible and thus avoids many details.