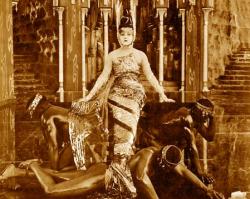 DeMille and Swanson personify wealth literally on the backs of black men.

Released at the very beginning of 1919, Don’t Change Your Husband was the first of six movies Gloria Swanson starred in for director Cecil B. DeMille. This is a humorous tale of marital discord, similar to Why Change Your Wife (only the sex of the straying spouse is switched), which was released the following year in 1920. The husbands were played by different actors but Swanson (although she has a different name) plays essentially the same character in both movies. In an inside joke the “other woman” in this movie is nicknamed “Toodles” which is the name of Swanson’s cat in Why Change Your Wife.

Here she is Leila Porter a woman grown unhappy with her husband’s slovenly habits and lack of attention. When he forgets their anniversary and kisses her with the odor of green onions on his breath she seeks solace in the arms of another man. They divorce; she remarries and lives to regret her decision. Will she find a way back to her original husband’s embrace by the end of the movie?

DeMille, besides being known for his Biblical epics, was a master of the bedroom comedy/drama. In 1919 divorce was a highly scandalous, and therefore unusual, occurrence. Audiences would have been shocked at how casual DeMille treats this very adult and somewhat taboo subject. He was also famous for his lavish sets and outrageous costumed fantasy sequences.

Swanson had made a name for herself in comedy shorts and small parts in feature length movies. DeMille made her a star. In fact she was one of the very first glamorous, gorgeously gowned and bejeweled movie stars and certainly one of the greatest of them all. In nearly every scene she wears a stunning draped dress with an elaborate head-dress and beads.

My favorite part is the fantasy sequence when her new boyfriend tells her that he will give her Pleasure, Wealth and Love. Pleasure is shown as Swanson perched on an elaborate swing, being pushed by several men, over a pool. Wealth shows her wearing an amazing head-dress, her head thrown haughtily back, while half-naked black men provide her a seat and parade jewels and gems before her. Love has her and the man dressed in animal skins cavorting through a jungle together. Ah, you gotta love DeMille’s imagination.

Like Why Change Your Wife, Don’t Change Your Husband is a highly entertaining comedy about the foibles of love that has only gotten better, and in some ways more outrageous, with time. 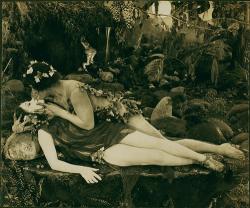 The implication of sex. Scandalous!

Patrick talked of Demille's vision, and he certainly was creative.  I was more impressed with Gloria Swanson.  She was only 20 years old when she made this but you would not know it.  She had a very comfortable, confident presence that made her seem far older.  Elliot Dexter was 49 at the time.  Swanson carries herself in such a manner that the age difference is not a glaring issue.

Patrick mentioned that the issue of divorce was quite controversial for the time.  I imagine the scene of Swanson as a wood nymph must have been as well.  Early in the movie Lew Cody leers at Swanson.  Other than her face and hands, she is completely covered, yet his stare is quite lecherous.  As the wood nymph, she shows all of her legs, arms and shoulders.  The Pan figure is likewise in a state of partial undress.  He lies down half next to and half on Swanson.  They start kissing as the scene fades.  That must have been practically pornographic then.

The plot hinges on Swanson not being happy with her inattentive, sloppy husband.  He provides her with a mansion full of servants.  Her only duty is to be there for him, and as the movie established, that is not too often.  She does not even have to have sex with him as they have separate bedrooms.   In other words, he asks nothing from her but some occasional companionship.  What is she bitching about? All she had to do was tell him no nookie with onion breath.  He would have gotten the message.  As far as his sloppy ways goes, why does she care?  They have that Asian servant to clean up after them.  Her hands never lift anything but a wine glass or a peacock feathered fan.

My son is currently studying the 1920's for his history class.  We watched this movie together as he worked on his homework.  Although the plot bored him, he noticed the record player and telephone, and how they compare to modern technology.   Patrick wrote this is more outrageous now, but it is also educational. 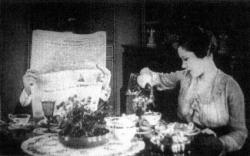 Eric, I think the age difference is very appropriate for this movie as it plays a part of the story. Leila is young and wants drama and romance, while James is older and more comfortable. The whole point of the story is for him to loosen up and be a little more romantic, while she learns to appreciate the comfort and solidity that he provides.

Divorce is treated very lightly here, which must have seemed unusual for the period. My favorite joke regarding it is when James tells Leila at the end that he's going to call and see if he can't book her into her old suite in Reno.

I've mentioned before that silent movies that run longer than 20 minutes tend to bore me and it's certainly true with this one. It's an okay movie, but you could have told this whole tale in about 20 minutes and yet here it's stretched out to an hour and 20 minutes.  Sex and the City could have packed this whole plot into one episode.

I will say this for DeMille, his filmmaking techniques are quite sophisticated. Having just watched Amarilly of Clothes-line Alley, which was released only a year before this movie, I couldn't help but think how much more natural and modern this movie seems. DeMille often lets the close-ups tell the tale. For instance, we learn that tomorrow is Leila and James' anniversary from the date on her wedding band. It's a small thing, but what makes it stand-out to me is that the camera shows the ring in close-up and then cuts back to a wide shot. It doesn't unnaturally linger on the date and it doesn't then mention it in a title card. Little moments like that impressed me more than DeMille's active imagination during the fantasy sequence.

I do appreciate how this is essentially a comedy. A Fool There Was, released 4 years earlier and starring Theda Bera, has a similar, although gender reversed, storyline that is ruined by the overwrought melodrama.  Don't Change Your Husband though, is a romantic comedy and never really takes itself that seriously.

Don't Change Your Husband is an alright little film, but I wouldn't say it has gotten better with time. 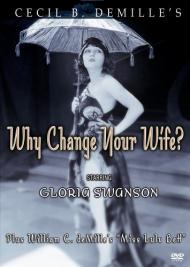