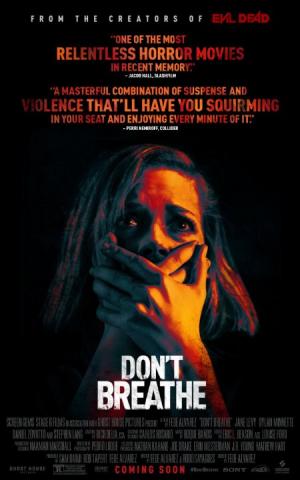 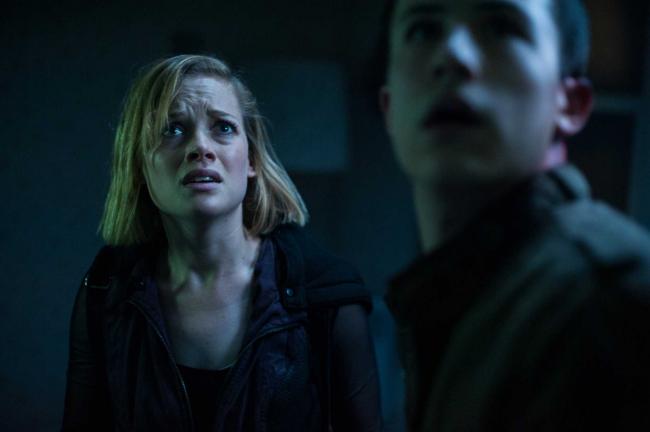 Don't Breathe is proof that a movie doesn't have to be good to be entertaining. There are plenty of plot holes and plausibility gets up and walks out the door very shortly into it, but thanks to some genuine tension, creepy moments, plenty of thrills, and one fucked up twist, it still manages to entertain. It's definitely a b-movie, but it's well aware of itself and doesn't try to be anything else.

The plot is very simple. Three teenagers in Detroit who make a habit of breaking into houses, chose the home of a blind man as their latest target. Rumor has it that he keeps a large sum of money in the house that he won in a lawsuit against the family who killed his daughter in a car accident. Once the three are inside the home however, they learn that this isn't going to be an easy job, as the blind man is an ex-marine whose house is like a fortress (except where it's not convenient to the plot). Soon, the trio are trapped inside the house with the blind man, who is anything but helpless and where there are more secrets than just hidden money.

At just 90 minutes, the plot wastes very little time on backstory. You learn just enough about each of the teenagers to give them a unique personality. Rocky (Jane Levy) comes from a trashy background, but she has a younger sister who she wants to escape with to California, if she can just scrape together enough money. Dylan Minnette plays Alex, the nice boy, who has a crush on Rocky and just comes on these jobs to be close to her. Money (Daniel Zovatto) is a walking Hollywood cliche of a young punk and whose fate is sealed (and even given away in some of the previews to the film) from the very beginning.

Writer/Director Fede Alvarez covers many of the plot holes with some clever camera work. In one scene the camera pans upward from the first floor to the second, down the hall, under the bed and out the other side, all in one unbroken take. There's another clever sequence where the blind man turns off the power to the home (why he keeps working light bulbs in all of the light fixtures is perhaps a question best never asked) and the teens are plunged into darkness, but through night vision cameras the audience is able to keep seeing the action.

In a weird way, the plot holes and the unanswered questions add to the sense of fun and cheesiness. Too many of the holes can not be discussed without spoiling the plot, including the film's biggest twist, when someone is discovered in the blind man's basement. How this person got there is never explained and would require outside help. Some plot holes are smaller, but still just as silly, such as the house's ventilation shafts which are bigger than the ones Bruce Willis used in Die Hard, including one that leads to an enormous grate in the outside wall, because you know, in Michigan, where you get very cold winters, what you want is a large hole in your house. Or, how when just moments before the teens are bemoaning that they are trapped inside a room with no way out, one of the windows is shown being shattered easily in the very next scene.

Still, if you just ignore all those nagging questions and enjoy the ride, there is plenty to enjoy. The ending even sets itself up for a sequel, although I can't imagine how that would work without it feeling even more contrived than this one. If you're looking for some cheap thrills and don't mind checking your brain at the door, this one has things to offer. 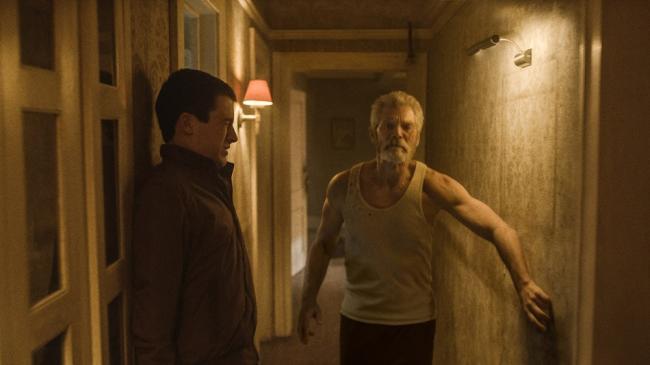 Yeah, this is definitely a "B" movie but it still makes for a decent distraction and provides a few scares and some shock. An older home in a deserted neighborhood makes for an appropriately creepy locale for something sinister to happen. The exterior shots were filmed on an actual abandoned street in Detroit, while the interiors were filmed in Hungary.

As Scott wrote, we get marginal characterization on the four main players, but it is enough. The interesting aspect of these characters is that none are innocent. There truly is no one on the screen who is without sin. We fear for Rocky and Alex but not Money as he is simply the stereotype of thug youth. We get caught up in Rocky and Alex being trapped in a home with a psycho but in all truth, they put themselves in there, so I had no real pity for them. I wasn't hoping that they die but again, how much concern can I generate for two thieves who find their criminal activity is more complicated than they anticipated?

The blind man is given some back story and for a few moments we see him as the innocent victim and feel his pain. Then we discover that he is far more resourceful than these three idiots anticipated as he easily out smarts them at almost every step. Later we discover that he is insane and we no longer have anyone on screen to concern ourselves with, leaving us with opponents who both deserve whatever comeuppance they get.

Stephen Lang makes a memorable creeper, with his ghostly eyes and menacing presence. He has a very muscular physique but we are never shown any weights. I bring this up only because vanity on a blind man does not make sense. Sure, a blind man could work out but men do it so they can admire themselves in mirrors and mask some other insecurity. This guy has no such motivation. I get that a man with a average build would not have been as impressive but any person who had me captured in their house and said the line, "You would be surprised what a man is capable of once he realizes there is no god." would be enough to scare the shit out of me, whether he was fit, fat or thin.

Because of the setting and a plot point, the movie tries to make some social statements. Rocky lives in a home resembling the trailer Eminem grew up in 8 Mile. Her single mother is trash and treats Rocky horribly. Alex likewise comes from a single parent home. Rocky steals in an effort to make a better life for herself and her sister, while the bored Alex simply does it to be a part of her life. These are desperate young people without any decent direction. Adding to film's message of poverty, is the fact that the woman who killed the blind man's daughter, and paid him a settlement, apparently avoided any legal ramifications involving vehicle manslaughter because she is rich.

Don't Breathe is clearly saying that, for some, those who lose or go without can become very desperate people, stopping at nothing to obtain what they think will make them happy. This film represents an archaic society with people who live outside the law and decide for themselves what is right and what is wrong. Again, they all deserve nothing good to happen to any of them. I was caught up in the cat and mouse maze hunt but the lack of a true hero left me, mostly, cold to the film's outcome.