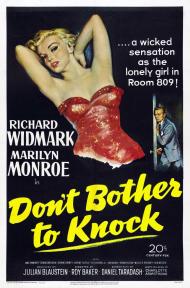 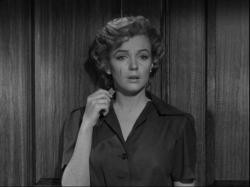 Don't Bother to Knock is Marilyn Monroe's first starring role. If you have never seen this movie you may be surprised because it is a very un-Marilyn like role. Several recognizable stars are here as well, but it is only Monroe's subtle performance that makes this movie memorable.

Monroe plays Nell, who has recently been released from a mental hospital. Her Uncle gets her a job at a Hotel where he works as a babysitter for the guest's children. Meanwhile, Jed and lounge singer Lyn, are having relationship problems. To get back at Lyn, Jed attempts to hook up with the new hot blonde on staff.

Shortly after getting into her room, where she is babysitting a little girl while her parents are down stairs, Jed realizes that her elevator does not go to the top floor. The little girl catches Nell, dressed in some of her mother's finery, and Jed together. Nell does the only logical thing and ties up and gags the little girl. She also thinks that Jed is her long dead boyfriend Phillip.

The movie plays like a film noir. It is all moody and melodramatic. The direction works as well as the acting. The one and only problem is that there is very little tension. Maybe in 1952, tying a little girl up and acting delusional was a bit frightening. In this post Columbine/9-11 world an unstable babysitter hardly registers on the fear O-meter. Even kid's cartoons like Fairly Odd Parents make fun of abusive baby sitters all of the time.

Still, for everyone who only thought Marilyn Monroe was a dumb blonde caricature, Don't Bother to Knock is an eye opener to the fact that the lady really could act.