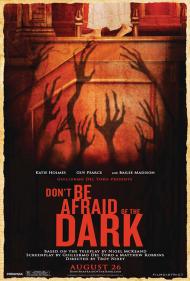 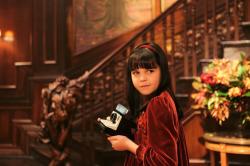 Bailee Madison in Don't Be Afraid of the Dark.

There's a lot to like about Don't Be Afraid of the Dark, even if it never does live up to its atmosphere and initial setup. There are some truly creepy moments of suspense and some genuine scares. Unfortunately, the resolution isn't as satisfying as the introduction.

The movie opens with a prologue set in 1910. A maid is lured into the basement of a gothic mansion by the master of the house where he brutally attacks her and knocks her teeth out. He then offers her teeth to a hole in the basement where whispers can be heard, demanding children's teeth. He implores the voices to give back his son in return for the teeth, but when his offering is found unacceptable, he is pulled into the hole instead.

Cut to modern times and Sally, a young girl, is sent to live with her architect father (Pearce) and Kim,  his live-in interior designer girlfriend (Holmes), who are restoring the mansion where the 1910 murder took place. After settling in, Sally starts hearing noises and voices calling her name. She's drawn to the basement, but it doesn't take long for Sally to realize that the voices aren't as friendly as they first appear.

It's in the early scenes where the creatures that live below the house are kept in shadow where the movie is really creepy. Although Guillermo del Toro didn't direct, he did write and produce and you can feel his influence. The creepy old mansion is both beautiful and scary as are the grounds, a part of which is reminiscent of del Toro's Pan's Labyrinth. The little creatures, which in appearance are sort of intelligent rats with human like heads and hands, flit from darkened shadow to darkened shadow, whispering as they go. There's something about bare feet and evil creatures with sharp knives under beds that's quite scary.

Once the creatures start to come out in the open, the movie begins to lose its way simply because anyone with any sense would be getting the hell out of that house. The groundskeepers - who knows partly what's going on - is attacked by the creatures but the incident is written off as an accident, despite him being stabbed multiple times. Just what kind of accident was he supposed to have had? Eventually Kim starts to believe Sally while her father is in the running for the worst parent of the year award, only just losing it to her long distance mother who sent her to live with her father in the first place.

Young Bailee Madison is quite good in the lead. She has some dramatic scenes as well as the more scary ones. Little kids make good protagonists in old fashioned horror stories because they're more open to supernatural ideas than grown-ups. Katie Holmes is also good, but Guy Pearce, who has been good in other things, has a pretty dull and thankless role here.

The atmosphere is quite strong throughout the movie and there are several well filmed scenes of suspense. If only the finale could have lived up to the first act than this movie would really have been something. Still, this is still a good movie and I can see it living on as a something to watch at home on a late night in the dark. 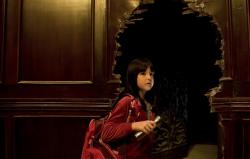 Bailee Madison as Sally, going to let the demons out in Don't be a Dumb Ass

Wow Scott! You were generous with the stars on this one. There is a lot not to like about Don't Be Afraid of the Dark. It by no means lives up to its atmosphere and initial setup. There are only a couple of truly creepy moments of suspense and maybe one genuine scare that was ruined by the movie trailer. Not only is the resolution unsatisfying but nearly everything that comes after Sally hears the first whisper is a letdown.

Young Bailee Madison is somewhere between adequate and awful in the lead. She has some dramatic scenes that involve pouting as well as the more scary ones that require screaming. Not everyone can pull those off. Having seen her in other films and on televisions Wizards of Waverly Place, I find her to be a very precocious little actress. Here, she acts more like a bored teenager than a child her age.

The only thing I can say about Katie Holmes’ performance was best summed up by my youngest son, who said, “She’s skinny in this movie.”  Her face is gaunt and lacks that rosy red cheeked look she had in Batman Begins (2005), one of his favorite films. Katie, don't be afraid to eat something. I agree that Guy Pearce has been good in other things. In fact, he has been better in absolutely anything else he has worked on. Here he sports a bad haircut and little interest in anything going on.

As Scott wrote, the atmosphere is strong throughout the movie but the supposed scenes of suspense are lacking. The creatures have several opportunities to kill Sally but like a Bond villain explaining their plans, they never take advantage of the situation they find themselves in. This is by no means a good movie and although I did watch it at home on a late night in the dark, it has pretty much become a forgotten film, and for good reason.