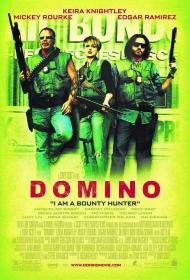 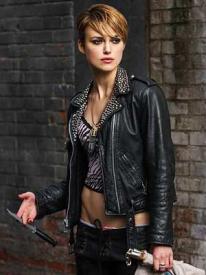 Domino, as directed by Tony Scott, is certainly stylish. Too bad that's all it has going for it. And sorry Tony, but no amount of visual and audio trickery, and music video type editing can make up for a lack of depth in story or characters.

As it reminds us at least three times during the movie, this is based on a true story (sort of). Although, beyond the fact that there really was a bounty hunter named Domino Harvey who had an upbringing similar to the character played by Kiera Knightly, I find it extremely doubtful that any of the actual events in the film bear anything even close to reality.

After covering Domino's privileged upbringing as the daughter of a Ford supermodel and actor Laurence Harvey (The Manchurian Candidate), the plot moves into the main thrust of the story which involves an armored car robbery and includes a Las Vegas businessman (Dabney Coleman) and the mob. Domino, who is now working as a bounty hunter with a group led by seasoned Hunter Ed (Mickey Rourke) is caught in the middle of it. At the same time, she is the star of a new reality show hosted by Brian Austin Green and Ian Ziering of Beverly Hills: 90210 fame.

What story there is though, only gets in the way of the violence and the intrusive visual style. The cuts are so fast and the audio and video so overlapped on top of each other that it's enough to make you car sick just watching. It would have made a kick ass 3 minute music video, but as a movie, it loses any coolness and just becomes annoying.

One thing the movie does have going for it is Knightly in the lead role. She's got looks, the accent and even does a nude scene, but with her model thin body, she doesn't exactly appear threatening. Rather than the tough biker-chick she seems to be aiming for, she looks like a rich girl trying to be punk just for the fun of it. Watching her though, is one of the only things enjoyable about the movie.

Near the end of the film, as if all that came before it wasn't bad enough, while on drugs, Domino and her group receive a visit from a preacher who seems to be god. While at first I assumed it was a drug-induced vision, the preacher then gives them a ride in his car, proving that he's real. It's the what the fuck moment of the movie.

There are a few moments of humor in the movie that work. Ziering and Green's appearance as themselves is played for some laughs, but not enough. At times the movie does border on satire, but it feels unintentional.

Given that this is based on a true character and that the real Domino was the daughter of an actor and a model, and who did become a bounty hunter, and then committed suicide, the potential for a great story was there. Too bad the wrong director got attached to it.