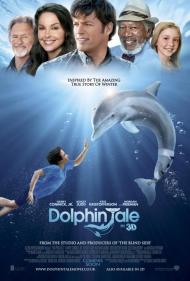 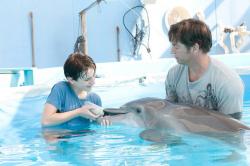 I'm always leery of movies where the star is an animal. Hollywood has a habit of imbuing animals with human like qualities, which I've always found annoying. That coupled with the sap filled trailer really had me dreading to watch this movie. I was pleasantly surprised to find that it was more the story of young Sawyer than it is the story of Winter the dolphin and while yes it is sappy, it's actually sappy in a pretty good way.

Sawyer is a shy young boy living in Florida with his divorced mom. His best friend is his older cousin Kyle. When the movie starts Kyle is leaving to join the army. On his way to Summer School one day, Sawyer finds a dolphin stranded on the beach caught in a lobster trap. The dolphin is taken to a marine hospital run by Clay Haskett (Connick). Sawyer comes to visit the dolphin and is befriended by Clay's daughter, Hazel. By caring for the dolphin and becoming involved in her recovery, Sawyer starts to come out of his shell. When Winter loses her tail, Sawyer recruits a prosthetics maker (Freeman) to build a new artificial tail for her. And when the marine hospital is in danger of running out funds, Sawyer works to organize a fundraiser to keep it open. It's a sweet and innocent story that emphasizes the importance of family and finding your passion in life.

Since, as I mentioned, I hate it when animals act like humans in movies, it's a huge relief to me that the dolphin, whom Hazel names Winter, acts like a dolphin. Sawyer befriends the dolphin, but Winter never behaves in any way other than that of a animal. And as I said, it's really the story of Sawyer and the effect Winter has on his life, rather than vice-versa.

Young Nathan Gamble is good in the lead. His transformation from the shy young boy afraid to say hi to anyone, to someone who is making phone calls and approaching strangers in his quest to save Winter, is believable and emotional. He's the anchor to the story. Connick Jr., Ashley Judd and Morgan Freeman all do good jobs as the grown-ups in the story, mostly playing it straight. Kristofferson plays the wise old grandpa, offering sage advice and is the character most apt to tip the story over into schmaltz. They could have cut one or two of the scenes where he offers sage advice.

There's an air of wholesomeness about this movie that is quite rare in Hollywood. A character is shown praying and enlisting in the military is mentioned in a positive manner. Yes, it has my brother  Eric's pet peeve of a single parent raising a child, but it also shows that Sawyer is in need of a positive male influence in his life.

Does it make me sound old if I say that they don't seem to make good family movies anymore? There used to be a time when the whole family could go to a movie together and all could enjoy it. Nowadays when a movie labels itself as a family movie, it generally translates to a kids movie where the humor will be on the level of slapstick. Dolphin Tale though, really is a movie that grown-ups and kids can enjoy together. 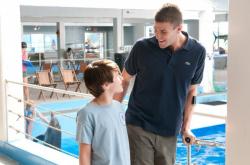 Dolphin Tale does indeed contain one of my biggest movie pet peeves.  Writing that Sawyer's dad abandoned him, and Hazel's mom has died clearly leads the viewer to believe that this was done so the two parents can eventually meet and fall in love.  Only that never happens.  Hazel's dad and Sawyer's mom only exchange lines once in the whole film.  Of course this is Sawyer's story not their's, but why make both parents single if it does not lead to something?

I agree with Scott, that the character of Grandpa is superfluous.  I believe he is just there to show another family generation.  He offers a few moments of advice, but the script could have given his lines to another character, such as Hazel's mom, without selling the story short.  A female dolphin trainer is always around anyway.  Why not just make her the wife and mom?  Would it not make more sense for the female trainer to say the line, "Let Sawyer try." when trying to feed Winter?

The part of Kyle could have easily been made to be Sawyer's dad going and coming from war.  They act like father and son anyway.   It was as if the writers went out of the way to turn spouses into extended family characters. Writing those characters to be immediate family makes more sense, unless you are setting out to make a point.

The argument is of course that in real life there are lots of single parents.  Well, in real life, Director, Charles Martin Smith is a divorced single father, and yes I am implying that he was attracted to the plot or influenced it for personal reasons.  In real life Winter was not saved and cared for by children, but the script made it so.  The real scientist who made the tail was white not black, but political correctness must be adhered to.

Dolphin Tale remains a decent movie but it could have been so much better.  We know from the previews that Kyle, Sawyer's cousin, will come home from the war wounded.  With Kyle living just across the street, I expected for Sawyer or his mom to see someone official arrive with the news, leading to a dramatic moment of crying and emoting.  Instead, we only have a very brief clip of Sawyer walking into his home to find his mother and Aunt sitting sadly at the kitchen table.

Kyle does however, provide an interesting aspect to the story.  At first he is the one trying to bring Sawyer out of his shell, coaxing him to get out of the house and make some friends.  After returning home, it is Kyle who needs to be pulled back into society and Sawyer, who has now found a place to thrive, provides him with a reason.

Writing 101: foreshadowing.  When Kyle gives Sawyer the knife, we know it will come back into the plot.  When we hear of the Marine hospital's financial problems we know it will become an issue.  When the story makes mention of Kyle's swimming, we know we have not seen the last of it.  When we meet two good looking single parents of same age children, we expect it to go somewhere.  If not, then they should have just been written as two parent house holds to begin with.