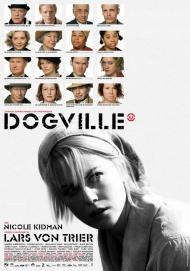 A three-hour movie filmed entirely on a blackened sound stage, with very few props, the outlines of roads and houses merely painted onto the floor, and night and day indicated simply by changing the lighted backdrop from black to white, is an oddity, to say the least. And yet, that is exactly how Dogville is presented and it is a completely engrossing film that both entertains and makes you think.

Its tale is a fable and tells how one night during the Great Depression a young woman, Grace (Kidman), arrives in the small Rocky Mountain town of Dogville. She's on the run from a group of gangsters. On the urging of local philosopher Tom (Bettany), the town agrees to hide her. In exchange, Grace agrees to work for the townspeople. For a short while, all is well. The residents embrace Grace and she enjoys her time and the people there. However, when the police show up with a wanted poster with Grace's picture on it, the townspeople increase their demands on her in exchange for keeping her hidden, or as the narrator of the film (John Hurt) puts it, "The people of Dogville bare their teeth." As their power over Grace grows, the townspeople begin to treat her like their slave. She is raped by nearly all of the men in town, except for Tom, who proclaims his love for her, but never raises a hand to help. However, what none of the townspeople know is that Grace has a secret, and it is a powerful enough secret that, by the end of the movie, the 'good' people of Dogville may come to regret how they treated their guest.

Quite obviously, the one thing that will strike anyone who watches this movie is the way its director, Lars Von Trier, chose to film it. The absence of sets and props, with actors miming opening and closing doors, is reminiscent of a play. Some may even be reminded of a very specific play, "Our Town"; only this is a dark and twisted Our Town. This absence of sets has a curious effect on the viewer. First, after about twenty minutes, I no longer noticed the sets weren't there. I merely accepted the world of the movie (After all, sets or not, all movies are make believe.). Secondly, it forced me to focus entirely upon the actors, their characters, and their actions. And thirdly, it makes the situation seem less real and therefore makes some of the unpleasantness a little easier to watch. The continued rape of Grace, if filmed realistically, would have been particularly hard to take, as would the violence that comes at the film's climax. This movie is a fable and so lends itself nicely to a touch of unreality.

With the entire weight of the story resting upon the shoulders of the actors, it is important that they be good ones. Besides Kidman and Bettany, the film boasts such actors as Patricia Clarkson, James Caan, Chloe Sevigny, and even the legendary Lauren Bacall. It is through them, and only through them, that this movie comes to life. The story is also aided by the narration of John Hurt, who sets each scene, often with sarcasm-laden breath, as the innocent events he describes quite obviously have a double meaning.

Another way in which Dogville differs from your typical movie is that none of the characters are heroes. Grace may be the protagonist, but you couldn't really term her behavior as heroic, she is more victim than hero. Tom, who at the beginning of the movie, appears to be its hero, turns out to be as flawed as the other residents of the town. Perhaps he is the most flawed, since he is aware of the evil the town engages in, yet he doesn't raise a hand to stop it.

There are some who have written that this movie is anti-American in its tone. I believe you could come away with that interpretation if that's what you wanted to get out of it. However, I really believe that the moral lesson here is much more universal than that. The moral (and like all good fables, Dogville has one) is simply that old chestnut, "Power corrupts, and absolute power corrupts absolutely." If you're of a more cynical nature, you could also take away the lesson of how dangerous it is to give yourself unrestrictedly to others.

If there is any weakness to this movie, it is its length. It is a rare movie that needs to be nearly three hours in length to either tell its story or to get its message across. Dogville could have done with some more editing. If its running time could have been brought in at less than two and a half hours, I think the story would not have been weakened, and the pacing would have been improved. That isn't to say I was truly bored at any point during this movie, but rather that at times you "get" what's happening and you just want the action to move onwards.

Despite its length, Dogville draws you completely into its world, and this is despite the quite constant visual clues that none of it is real. Very few movies make you seriously think and entertain you at the same time. Dogville does both, and in a way that you're likely to remember for a long time.

Scott you must have been bored shitless to have found Dogville entertaining. Sure the use of a painted line on the floor representing a wall is unique but it is just a gimmick. Would the movie had been any less had they actually filmed it on location? The only time it added to the film was when Grace is raped for the first time. You see it happening and, because of the lack of a set, you also see the other town folk going about their day, oblivious to it.

At three hours in length I could not wait for it to end. Everyone drones on about arrogance. "No. I was scared, Grace. I used you and I am sorry. I'm stupid, I am, maybe even arrogant sometimes." Tom says at one point. In another scene Grace says, "I was raised to be arrogant." Then there is the scene at the end where Kidman and Caan discuss it to to death.

Grace is not so much a slave as a dog. Tom finds her as a stray wandering through town. He takes her in and the town treats her like an pet, not a human. They force her to wear a collar and leash. At one point she says to Tom, "I stole that bone." Like a dog getting beat by their master, Grace takes all the crap that gets dished out to her. Her reward for all of what the people demand of her is a place to sleep, Tom's meaningless affection and some figurines. It is like a dog being allowed to sleep indoors, get their head occasionally rubbed and allowed a squeaky toy. The final scene of the film, after Grace gets her revenge, is the painted outline of a dog turning into the real thing.

The one and only scene I liked was the one near the end with Caan and Kidman. Sure I liked it becasue it signaled that I could soon turn off the television and go to bed, but it also was a genuinely great scene. The best line was Kidman saying, "There's a family with kids. Do the kids and make the mother watch. Tell her you'll stop if she can hold back her tears. I owe her that." It is a line spoken to her earlier in the movie, but not nearly as menacing.

Dogville is an arrogant piece of film making. It asks the audience to work far too hard for far too long, with very little reward. It is like having a dog do three hours of tricks to only get a pat on the head. 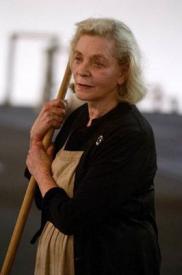 What the hell am I doing in this movie?

Dogville takes a commitment to sit through that’s for sure. It is not without some reward, however, for the patient and thoughtful viewer. Eric correctly identified the theme, which is arrogance. This being Lars von Trier you can expect a philosophy that represents a mostly cynical view towards human nature.

Tom represents the classic arrogant liberal. He feels the citizens of Dogville need to become more accepting and tolerant of diversity. Getting them to welcome Grace is how he attempts to do this. He soon shows his true colors however. Tom is a coward.

Grace is also of the liberal slant, but unlike Tom, she has plenty of guts. I never saw her as a victim. She is a classic martyr who arrogantly believes she can change other (inferior) people’s lives for the better by giving selflessly of herself. We learn at the end of the story that she never actually needed the sanctuary of Dogville but was using its citizens as a philosophical experiment to prove her father wrong.

Of course what happens is the opposite. As Scott mentioned, by giving the townspeople so much power over her life she doesn't help elevate them spiritually at all. Quite the opposite, she corrupts them. And for that she eventually seeks the ultimate revenge. She is only human after all.

The James Caan character – The Big Man – is the classic conservative capitalist (in the guise of a mob boss). He’s the most honest person in the movie because he is up front about just who and what he is without couching his arrogant views in any idealistic pretense. He knows what pieces of crap humans are and handles them accordingly. Although Lars may not like this comparison, I think this character most closely represents the director’s point of view.

Dogville is unusually staged and thought provoking but the story and any philosophical arguments this film fable is trying to make could have been achieved in half the time. 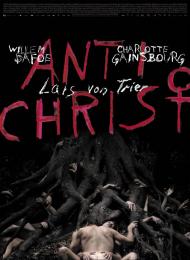 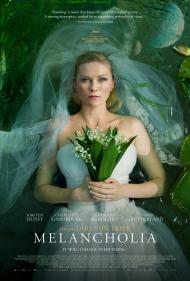