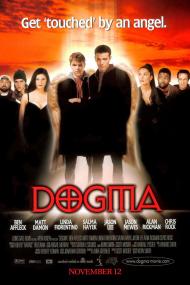 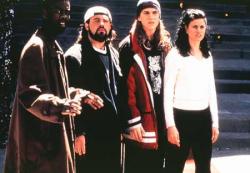 Kevin Smith looks at religion, most notably Catholicism, from a comedic angle in Dogma. The movie opens with a statement that this movie is in fact a comedy and it is not an intention to offend anyone. If you are religious, particularly Catholic, you may find this film very offensive. When Chris Rock is attempting to convince someone, that he knew God, he says, "Knew him? Shit... Nigga still owes me twelve bucks." For everyone else, you may find it funny as Hell.

Affleck and Damon are two angels stranded on Earth, who find a way to get back to heaven. If they can walk across the threshold of a church in New Jersey, God will be forced to let them go back to Heaven. On their journey from Wisconsin, they decide to smite those along the way who have committed sins. "I can spot a commandment-breaker a mile away." One of them announces.

Meanwhile, God has sent an Apostle, Rock, a Muse, Hayek, and two prophets, Jay and Silent Bob, to help a woman, Fiorentino, stop the angels from completing their quest. The Apostle is full of philosophical lines like, "He still digs humanity, but it bothers Him to see the shit that gets carried out in His name - wars, bigotry, televangelism. But especially the factioning of all the religions." He also goes on about how Jesus was actually black and not white. The Muse is likewise wise, "I have issues with anyone who treats faith as a burden instead of a blessing. You people don't celebrate your faith; you mourn it." Jay and Silent Bob just want to have sex with Fiorentino. "So do you do anal? Is it true that chicks fart if you blast 'em in the ass?" Jay asks her shortly after they met at an abortion clinic because, "We figure an abortion clinic is a good place to meet loose women."

I love movie dialogue, and Dogma is one of those films where the memorable lines keep coming. One of my favorites is when Damon says, "Mass genocide is the most exhausting activity one can engage in, outside of soccer." I laughed hardest when Rock tells Fiorentino, in a dramatic way, that she is the distant relative to Christ, and Jay says, "So that would make Bethany part black."

I know that Smith loves Dialogue as well. From James Bond to a lengthy discussion on John Hughe's films, Dogma has more references to other films than any I have ever heard. One of the only times Silent Bob speaks is when he throws someone off a train, he imitates Harrison Ford from The Last Crusade, "No Ticket!"

Smith is such a movie buff that he even makes fun of the religious culture created by movies. Rickman remarks that all people know about religion is what we see in Charlton Heston movies. Later he adds, "You people. If there isn't a movie about it, it's not worth knowing, is it?"

Dogma takes a harsh, yet extremely funny look at Christianity and how we see God. If you are a religious person, you may be offended by its approach to faith. If you are an atheist, you may find it offensive in that it does say that God exists. I think it is just saying that we all need to take our religious ideas with a greater sense of humor. 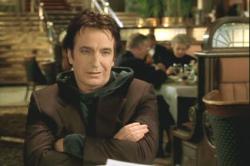 Alan Rickman as the sarcastic voice of God in Dogma.

Dogma is a Kevin Smith directed movie featuring Jay and Silent Bob, Jason Lee, Alanis Morissette, Janeane Garofalo, and Matt Damon and Ben Affleck still working together as a team. Can a movie be anymore 1990s than that? I guess the only way would be if it took place in Seattle.

The story definitely works better as an adventure comedy than it does as any kind of serious look at religion. Several characters try to have serious discussions on the subject, but none of it is all that original. The line you mention Eric, "What He really hates is the shit that gets carried out in his name. Wars. Bigotry. Televangelism." is a prime example of what I mean. A better, more original line is, "I think it's better to have ideas. You can change an idea. Changing a belief is trickier."

Faith is also mentioned quite often, but the problem with faith in the world of this movie is that shortly into it we are shown that God exists and like Schrodinger's Cat, once proof is given faith becomes irrelevant. And yet, nearly two-thirds into the movie Bethany is still discussing when she lost  her faith.

Probably because he was raised Catholic, Smith seems to unfairly single out that religion for criticism over others that are just as guilty of the sins he blames on it. Despite claiming in an interview in the Los Angeles Times in 1999, "I don't make a movie like 'Dogma' to make fun of the Catholic Church. I talk about stuff in 'Dogma' to make the church more human so people aren't so put off by it." there's little evidence that he's trying to promote the church in a positive light.

In the lighter and funnier moments is when Dogma is at its most entertaining. I agree with you Eric that there are some great lines.
A bus station ticket attendant: "I suggest you not underestimate the staggering drawing power of the Garden State, and show up two hours in advance."
A scene stealing annoyed Alan Rickman: "Tell a person that you're the Metatron and they stare at you blankly. Mention something out of a Charlton Heston movie and suddenly everybody is a theology scholar."
Bethany: "Were they sent to Hell?" Metatron: "Worse. Wisconsin. For the entire span of human history."
And of course almost anything that comes out of the foul mouthed Jay's mouth.

Even though I don't think that Smith is as successful at taking a serious look at religion as he wanted to be, I applaud him for even tackling the subject. A comedy with ideas is a rare thing and one this funny is even rarer. 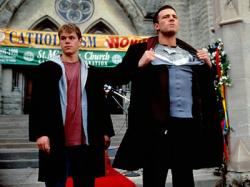 I agree Scott that Dogma works better as an action comedy than a satire on organized religion. Although it does have flashes of brilliance when tackling Catholic doctrine, like in George Carlin’s inspired cameo as Cardinal Ignatius Glick. “Christ didn't come to Earth to give us the willies... He came to help us out. He was a booster. And it is with that take on our Lord in mind that we've come up with a new, more inspiring sigil. So it is with great pleasure that I present you with the first of many revamps the "Catholicism WOW" campaign will unveil over the next year. I give you... The Buddy Christ.” Cut to a statue of a winking, smiling Christ beckoning with outstretched hands in a friendly gesture.

I agree the dialogue is intelligent and witty even when being completely foul. This is nitpicking Eric but since Chris Rock plays the forgotten thirteenth apostle Rufus, it is Jesus whom he is referring to in the joke you mention, not God. Count me on the side of those that found it funny as hell, in fact it’s probably the funniest joke in the movie and if Eric hadn’t beaten me to it I would have quoted it in my review, which explains why I’m going on about it at such length.

Rufus also gets this hilarious line about his time spent following the Lord. “In the three years I followed His ass around Jerusalem, did I ever get laid? Hell no. And I was in my prime. I could've been knee-deep in shepherd's daughters, not to mention fine-ass Mary Magdalene. She had a thing for dark meat, if you follow me.”

Jay cracked me up upon meeting a silent Alanis Morissette as God. “What the fuck is this, The Piano? Why ain't this broad talking?” Yes it’s irreverent and sacrilegious but funny as hell. How about when Bartleby wreaks havoc at the end and the hospital PA announces, “I repeat. This is not a drill. This is the apocalypse. Please exit the hospital in an orderly fashion. Thank you.”

Not all of the gags work however. The shit demon is just plain disgusting and not at all amusing. Dogma is violent, funny and original. It features a quintessential 1990s cast but remains entertaining in this second decade of the new millennium.