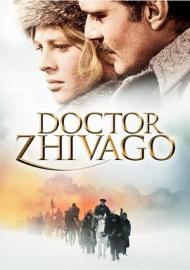 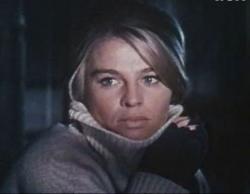 Having recently watch, reviewed and thoroughly enjoyed Bridge on the River Kwai and Lawrence of Arabia, I decided to complete David Lean's film trilogy of man's struggle during wartime.  Doctor Zhivago is bigger in scope than its two predecessors, covering many years. As with the other films, the setting is integral to the story. The biggest difference being that this is a love story with a female lead as well as a male one.

Set during World War I and the Russian Revolution, Doctor Zhivago tells of the romantic relationship between the married Yuri Zhivago and the married Lara. Doctor/poet Yuri first sees Lara when he is called to help his mentor revive Lara's mother after a suicide attempt. He again sees her after she shoots a man at a party who had just raped her. They officially meet during the war with Lara acting as Yuri's nurse, but their relationship remains professional.

Yuri returns to his son and wife,Tonya. Lara is meanwhile married to Pasha. A man with far more political passion than romantic. Yuri relocates his family by journeying on a train that seems like one step up from the trains used to deliver Jews to Auschwitz. At a stop, Yuri walks through the woods and comes upon a political train with soldiers commanded by Pasha. Yuri learns that Pasha has not seen Lara since the war.

Yuri and his family start a new life in the country with a big old house and a garden. They do the very un-socialist thing of working hard to benefit themselves and not rely on the government. Seasons change and Yuri and Lara meet again. She thought her husband was killed in the war, while Yuri tells her of their meeting. Yuri and Lara fall in love and begin an affair. Yuri starts to live a double life. One in the country with his pregnant wife and son and the other in the city with Lara and her daughter.

The world intervenes when Yuri is abducted by partisans and forced to be a doctor for their troops. Again, time passes with Yuri caught in a war he wants no part of. He is dragged behind an army cleaning up the wounded after every battle. Eventually he deserts and returns, not to his wife but Lara, who tells him his family has returned to Moscow.

Yuri takes Lara and her daughter to his deserted, frozen country home. This is my favorite part. Yuri starts writing poetry again. The best scene is when Yuri is up late at night writing and Lara walks in complaining that there are wolfs outside howling.  He assures her and they kiss. It is a beautifully symbolic moment of these two people living in a cold world as dangers lurks just outside.

As romantic as this movie tries to be, I never found myself caught up in their love. Yuri is a bastard. He has an affair on his wife and two children without a care as to how it affects them. Sure, Julie Christie is as stunning as can possibly be, but that does not justify his moral flaws. You may argue that he is hopelessly in love with Lara, but the movie never says why.

Alec Guinness narrates the story as Yuri's half brother Yevgraf, a career soldier in the Soviet Army.  The film starts with him meeting with a girl he thinks may be Lara's and Yuri's daughter. The film ends with him talking to her. It tries to create a bittersweet ending but I found very little in this story to be satisfying.

Doctor Zhivago was a huge success, both financially and critically. It was nominated for a Best Picture and Director Academy Award but lost both to The Sound of Music. One award that it won and deserved was that of Best Cinematography. Like his previous work on Lawrence of Arabia, Freddie Young proved a great asset to the look of a film.  The look of a film is however, not enough to make up for an over rated love story 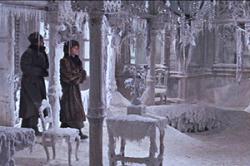 Doctor Zhivago is one of the screen's great love stories. There's no doubt about that. After the nearly all male casts and huge action scenes in Bridge on the River Kwai and Lawrence of Arabia, David Lean was quoted as saying he wanted to make a more intimate, romantic piece. He found the perfect vehicle in the popular (but banned in Russia) novel Doctor Zhivago by Boris Pasternak.

The resulting epic film struck a nerve with audiences. Eric is correct that it was a huge box office hit and that it won five of the ten Oscar's it was nominated for. It became MGM's second most profitable film of all time after Gone with the Wind and it grossed more than every other David Lean movie combined. But thanks to the unstoppable juggernaut called The Sound of Music it still finished as the second biggest hit of 1965.

It did not, however, receive positive reviews from critics. Roger Ebert wrote that, “the plot of Doctor Zhivago lumbers noisily from nowhere to nowhere.” Newsweek Magazine famously made several comments that can only be described as snide, writing about its “hack-job sets” and “pallid photography”. The theme song was called syrupy (but the soundtrack went gold). Various other critics complained about the overly romantic soap opera plot and episodic manner in which it unfolds.

I agree with all of these criticisms. The story is highly romanticized and the plot meanders rather like a television miniseries from the 1970s or 80s. The music is syrupy but then so is love. Despite all these flaws I understand why Doctor Zhivago made such a big splash in the cinematic pool of popularity. It is just so fucking tragically romantic! Especially the final thirty minutes or so, from the iconic scene where Yuri and Lara walk through that stunning ice palace (see photo) until Zhivago's sudden demise on the streets of Moscow.

Omar Sharif is so damn dashing and handsome as the mesmerizing doctor/poet/hero Yuri Zhivago. Julie Christie's Lara is a stunning beauty with classically chiseled features. Together they generate enough heat to melt all the snow in Siberia. Although they can never truly be together they share some incredibly romantic dialogue...
Lara: "Wouldn't it have been lovely if we'd met before?"
Zhivago: "Before we did? Yes."
Lara: "We'd have got married, had a house and children. If we'd had children, Yuri, would you like a boy or girl?"
Zhivago: "I think we may go mad if we think about all that."
Lara: "I shall always think about it."

Doctor Zhivago was filmed mostly in Spain on a ten acre recreation of Moscow that took 18 months to construct. Located in a suburb of Madrid, it included trolley cars, a train viaduct, a replica of the Kremlin and numerous shops and houses. For the scene at the country estate in springtime more than 4,000 daffodils were imported from the Netherlands.

Doctor Zhivago features plenty of symbolism as well as homages to other films. Here are two that stood out for me. A Russian stringed musical instrument known as a balalaika plays a key part in the story. Yuri inherits his mother's and it shows up throughout the movie as a representation of his lost childhood innocence, similar to the role the sled Rosebud plays in Citizen Kane. And in the scene where Yuri and Lara cross paths amidst all those army deserters Lean purposely emulates a similar scene in King Vidor's silent WWI classic The Big Parade.

Doctor Zhivago is flawed but it remains one of the silver screen's most enduring epic love stories. 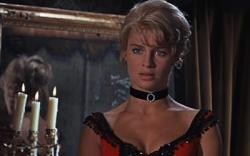 I agree with Eric, this is one love story that is vastly overrated. Christie as Lara is unquestionably beautiful, with one of the sexiest mouths ever put on film, and clearly Yuri is enraptured by her, but beyond her looks the film never gives a reason for his overwhelming love of her. And also as Eric noted, Yuri is seemingly a happily married man, who wants to have his family and his bit on the side. We aren't even given the excuse of his wife being a shrew, as she is, as played by Charlie Chaplin's daughter Geraldine, sweet and loving. It also doesn't help that the two lead characters don't even speak to each other until 80 minutes into the film with their love story not really kicking into high gear until the final 30 minutes or so.

These are two of the most passive characters in cinematic history. Lara goes along with everything everyone tells her. Her only independent action is to shoot Komarovsky. Yuri, is nearly as weak. He is carried along the stream of history without ever once fighting the current. He never stands with or against the revolutionaries, only serving on the frontline when he is forced to. Whenever he is confronted by someone, he does his best to placate them and avoid a conflict. They don't make things happen, they let things happen to them.

The length of the film is criminal. Patrick compared the plot (although calling this series of events a plot is a bit kind) to one those mini-series from the 1970s and '80s and it's an apt comparison. Splitting this story up into several nights viewing would make it much more palatable and also allow more of the historical backstory to be explained. I also would have enjoyed seeing a couple of the supporting characters explored more. The three most interesting of them are Rod Steiger as the caddish Komarovsky, Tom Courtenay as Pasha, the naive idealist who becomes the hardened revolutionary leader, and Ralph Richardson as the aristocratic Russian forced to suddenly deal with the new realism of communism. Those three deliver the strongest performances in the film and I wouldn't have minded seeing more of them and less of the "love story". Packing so much into one movie intended to be watched in one sitting shows a director indulging himself. After the twin sweep of the Academy Awards of The Bridge on the River Kwai and Lawrence of Arabia, I guess no one felt able to tell David Lean what to edit.

One interesting aspect of the story is that while it feels like an old-fashioned epic, it does contain a couple of more adult elements than are typically found in this type of film. Because it was released in 1965, the aging Production Code had lost most of its teeth. Following Lara's mother's attempted suicide, she lies naked on her stomach in bed, revealing far more skin, including the cleft of her buttocks, than you would have seen just a few years earlier. Sex isn't merely implied, but is openly acknowledged, with the married Yuri and the married Lara shown blatantly in bed together. And Lara becomes pregnant as a result. The two ultimately pay the price for their indiscretion, but it's obvious that we are meant to be rooting for the two of them to find happiness.

The single best thing this movie has going for it is the cinematography and production design. The sweeping shots of the countryside might slow the story down, but they are gorgeous to look at. The sweeping, snow covered countryside is breathtaking and must have been even more impressive on the big screen. The interior scenes are equally well shot, especially the fantasy ice palace that Patrick mentioned.

It's the high quality look of the film that really makes it stand out. Without that this is just a run of the mill soap opera and not even a very good one.