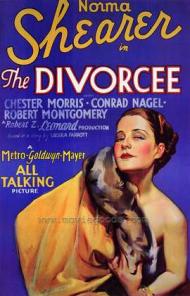 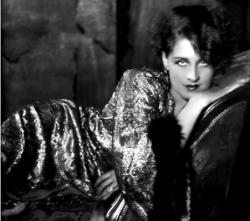 Norma Shearer demonstrating what a STAR looks like in The Divorcee.

Adultery is the theme of this early pre-Code talkie. Norma Shearer stars, in the role that won her an Oscar. In those first years after the movies acquired speech she and Greta Garbo vied for the title of Queen of MGM. It didn’t hurt that Shearer was married to producer wunderkind Irving Thalberg. By the time of America’s entry into the Second World War both women would be finished with the motion picture business.

As she was normally cast as more honorable women, Shearer had to convince her husband to give her the rather sensual part of Jerry Martin. Apparently she did this by posing for some revealing photos in sexy lingerie. At any rate she is quite convincing as the wife whose husband cheats, causing her to react in kind. She looks quite glamorous in the fabulous gowns by Adrian. She certainly knew how to pose, walk and lounge around.

Chester Morris plays her unfaithful husband. He expects his wife to get over his infidelity, but when she turns the tables on him by sleeping with another man, he reacts with a typical male double-standard (it’s a good thing she doesn’t reveal the identity of the man (Robert Montgomery) as he is her husband’s best friend!). During their dramatic confrontation she tells him, “From now on, you're the only man in the world that my door is closed to.”

She then proceeds to live up to her words by having a string of affairs. These are cleverly shown by director Robert Z. Leonard by showing a series of close-ups of her hand getting a ring placed on it by a man’s hand. During the last one she makes a subtle erection reference. As a man’s hand caresses hers we hear a male voice speaking in French. Jerry replies, “I don’t understand a word of French but I can recognize the symptoms of high blood pressure in any language.”

There is a rather dated subplot involving another man (Conrad Nagel) that pines for Jerry. At the beginning of the movie, after he learns of Jerry’s engagement, he gets drunk and causes a car accident that disfigures his girlfriend. Later in the movie she shows up, melodramatically wearing a black veil over her face as if her appearance is too horrifying to be gazed upon.

The Divorcee gets off to a slow start. It picks up quite a bit after Jerry learns of her husband’s affair. I won’t give away the ending. Norma Shearer, although not remembered by the general public today, was a shimmering movie star of the highest order. She remains the only reason for watching The Divorcee. Trust me, she’s reason enough. 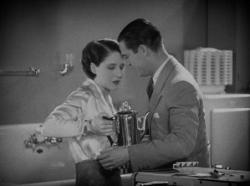 Norma Shearer and Chester Morris in The Divorcee.

This movie is pure soap opera, remarkable really only because of its subject matter. I agree with you Patrick that Shearer is a star, but even she can't raise the material above its sordid source.

None of the characters are very sympathetic, except perhaps for Dot, who is the girl disfigured in the car accident. Jerry and Ted start off likable enough, but he turns out to be a thoughtless cad who thinks nothing of cheating on his wife while she responds to his infidelity by sleeping with every man she can land regardless of the consequences. I certainly wasn't rooting one way or the other for the two of them to reconcile before the movie ended.

There are some moments of humor. When one of Jerry's many lovers tells her, "But, my dear, my feeling for you is purely platonic." She replies, "Really? I've heard of platonic love, but I didn't know there was such a thing as platonic jewellery." The maid Hannah also provides some comic relief. When she tells Jerry that she has a date with her butcher, Jerry asks if his intentions are honorable. Hannah responds with disappointment, "I'm afraid they are. He just wants to keep a good customer." Later, when Paul and Jerry are on his yacht and he proposes to her, despite him still being married to Dot, Jerry tells Hannah that it's heaven on the boat, to which Hannah replies, her voice dripping with sarcasm, "Of course, I ain't heard any angels singing, but aside from that..."

As always with these pre-code films, I found the adult nature of the plot to be refreshing. We so often sanctify the past and think of it as a time of innocence. How much of that though, was simply a product of the Hays Code censorship? On this site we have often stated how older films are a window into the past. While that's still true in the later 1930s through the early 1960s, once the Code began to be enforced, the view through that window became a little more murky and distorted. 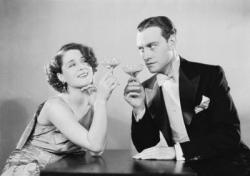 Norma Shearer and Conrad Nagel in The Divorcee

As Scott wrote, this is first and foremost a soap opera.  The extra marital affairs may have been a bit shocking for audiences of the time, but have since become standard plots for every daytime drama ever made.  This kind of heavy melodrama had been seen before in silent films.  Audiences watched Gloria Swanson in several silent films about marriages breaking up and infidelity.  However, they never heard lines like what is spoken here.

My brothers mentioned several good ones.  I love the high blood pressure one that Patrick mentioned.  I really like how these old writers could come up with ways for the actors to talk of such things as an erection without being at all crude about it.  The dialogue is loaded with sexual innuendoes.  I like when Shearer responds to Montgomery after he asks her to wait for him. "Waiting isn't my idea of the king of indoor sports. I've no intention of waiting around for three or four years while you harvest an additional crop of wild oats."   A modern translation would be, "I am not going to be loyal to you while you screw whoever you want."  Man they wrote great lines!

I was a bit bored with the melodramatics but the dialogue was sharp as hell.  When von Eltz tells Shearer to tell him the truth, she laughs knowingly, "The last thing any man wants to hear from any woman!"  Ouch!  Scott has often written that men in these early films who had affairs acted like victims of their desires and the women who tempted them.  Shearer here has none of that.   After a period of separation, Morris expects Shearer to have gotten over his affair but she has this snarky line waiting for him, "You're like a little boy who's stolen some jam, is spanked, and kissed."  She then lets him in on her philandering.  Shearer does not serve revenge cold, she serves it straight out of the freezer.

I get the feeling that the original audiences who saw this in 1930 were far more shocked by Shearer's affairs than Morriss's.  The movie makes a point about equality and double standards that I am guessing were far more prevalent then, than today.   Hearing about a man stepping out on his wife was probably more common than hearing about a wife doing the same.  Shearer plays a woman having none of it, yet the ending contradicts that.

The Divorcee is a film very much of it's time and yet also a bit ahead of it's time.  It is not my favorite pre-code talky, but it is worth watching for the dialogue alone.  It is based on the novel "Ex-Wife", by Ursula Parrott,  with several writers given screen credit, including John Meehan for "continuity and dialogue".  I am not exactly sure who is responsible for all those glorious lines but they are the film's high light.