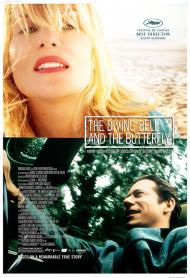 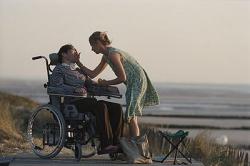 One of the best movies of the year.

The Diving Bell and the Butterfly is one of those movies that I put off watching because it looked so depressing. I mean c'mon, a guy who's trapped inside his own body, only able to move his left eye, communicates to the rest of the world through blinking, including writing a full-length book? And based on a true story, so you know that someone actually went through this? Not exactly the feel good movie of the holidays. But okay, so I finally caved in to the buzz it's generating and saw it. Turns out, it's buzz well earned and while it is sad in parts, it's not depressing at all.

As the movie starts, we see events through the eyes of Jean-Dominique Bauby. He's just awakened from a coma and is unaware of where he is or what has happened. He learns with us, that, although a relatively young man, he has suffered a stroke that has left him completely paralyzed. The only thing he can move is his eyes, and one of them is infected, soon to be lost. Bauby, aided no doubt by his money and fame as the editor of Elle magazine, is given the best treatment possible at the hospital at which he is staying. While at first his thoughts are suicidal, thanks to his friends, the hospital staff, his children, and most of all the women in his life, Bauby finds the will to carry on. He also, with the help of the method devised by his speech therapist, decides to write a book about his experiences. He is able to "write" the book by having his assistant recite the alphabet and he will blink once when she gets to the right letter. In this painstaking manner, they are able to create with painstaking slowness, his novel.

This story could so easily have been nothing more than a "disease of the week" made-for-TV movie, filled with melodrama. It could also have been quite boring. I mean, watching a guy blink out a book doesn't sound like the most riveting idea for a movie. However, this movie has been filmed in such a way that boring is the last thing it ever is. And it steers far clear of mere melodrama.

Most of the movie is shown from Bauby's point of view. Either quite literally; through his eyes, or inside his head and into his imagination and memory (and quite often the two become mixed up). The most frequent image in his mind is that of himself suspended underwater, inside an old fashioned diving suit. Later, near the end of the movie, he likens his reawakening will to live as a butterfly coming out of its cocoon. Hence the title. The imagery and the stream of conciousness nature of it makes for the best part of the movie and some of the best filmed scenes of any movie this year. There are also some very touching scenes between Bauby and his father, played by an aging, but still very effective, Max Von Sydow.

Of all the movies generating award buzz this season, The Diving Bell and the Butterfly was the most surprising to me and perhaps the most special. Boredom or depression are the last two things you will have to worry about if you see this movie. 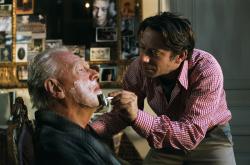 Max von Sydow and Mathieu Amalric in The Diving Bell and the Butterfly.

Watching The Diving Bell and the Butterfly is a deeply moving experience. It takes you inside the head of this remarkable man. I cannot begin to fathom the patience and perseverance it took to write a book merely by blinking one eye upon hearing the correct letter spoken by another person. I likewise cannot fathom the patience and perseverance it took to continuously recite the alphabet over and over again, waiting for another person to blink when you say the right letter. Reportedly the entire book took approximately 200,000 blinks, with the average word taking two minutes to complete.

The first 45 minutes or so of the film is shown completely from Jean-Do's perspective. It is at first quite disorienting as the camera, representing his vision, goes in and out of focus. We meet his doctors and therapists and as Jean-Do slowly acclimates to his new circumstances, so do we. It is a brilliant technique by director Julian Schnabel.

Jean-Do eventually overcomes his self-pity when he gets the idea that he can still write a book. He already had a contract to write one but had naturally given up any hope of doing so. What really saves him though is his imagination. It is, along with his memory, the one thing he retains complete control of. He clings to them both like a drowning man, which in many ways he was.

The flashbacks of Jean-Do with his family are quite touching. He has three young children and an aging father. I agree with Scott that Max von Sydow is very good in the latter role. In one scene Jean-Do shaves his invalid father while they converse (see photo). Neither one suspecting what the near future holds. The one memory Jean-Do lacks is the moment of his stroke. It isn't until the very end of the movie that we see the events of that tragic day. It brings the story full circle. By this time we already feel as if we know this man intimately.

The combination of Mathieu Amalric's incredible portrayal of Jean-Dominique Bauby and the inspired direction by Julian Schnabel makes The Diving Bell and the Butterfly a truly rare motion picture. Like my brother Scott I had put off watching this movie. I'm sorry I waited so long.

Emmanuelle Seigner in The Diving Bell and the Butterfly

After watching The Diving Bell and the Butterfly and reading my brothers glowing reviews, I wondered if we saw the same movie. Scott, not only is it sad in parts but it is very much depressing. A man with so much going on has a stroke and is reduced to being a life support system for his eye lid. Sure, he has his memories and imagination but that would have only helped this film if we were given more flash backs.

Scott also wrote that, “boring is the last thing it ever is.” Hello! Look no further than Patrick’s comment that the first 45 minutes or so of the film are shown completely from Jean-Do's perspective. That alone makes for a frustratingly boring watch. The director obviously wanted us to have an inkling of what Bauby must have experienced, but is annoying an audience really the best way to win them over?

Either way, it worked. I was annoyed by the POV direction but felt achingly for Bauby, especially when the doctor is stitching his eye closed and Bauby is screaming, inside his head, for him not to. I wanted to punch the doctor who says to the bed ridden Bauby, “We want you to take it easy for a few days.” In his mind, Bauby says, “What do you think I'm doing now?”

The pacing is slow and tediously painful. I liked the flashbacks as they brought a break from the repetitive hospital scenes and I would have liked more of them. The film gets better as it goes, creating some heart breaking scenes in the last half of this two hour drama. My brothers mentioned the phone call Bauby has with his father. It is one of the saddest scenes I have seen in a long time. I was also struck by the phone call from his girlfriend, Ines, who has not come to visit him. Celine translates his winks for her. Ines says she does not want to see him as he is now, preferring to remember him as he was. Celine barely holds it together when she translates Bauby winking, “Each day I wait for you.”

The ending, when we see Bauby’s last healthy moments before the stroke, dug into my heart. Bauby had so much and appreciated it all so little. He was a part time father and disposed of girlfriends for frivolous reasons. The Diving Bell and the Butterfly is a cautionary tale that life is fragile and we should enjoy what we have because in mere moments it could all slip away.

I found it interesting that Bauby learned to better express himself through winking than he ever did when all of his faculties were working. There were moments that emotionally stirred me, but I was in fact bored through portions of The Diving Bell and the Butterfly. This movie may move you but considering how sad and depressing it is, it can be somewhat of a challenge to get through.