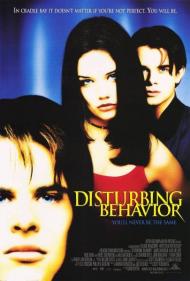 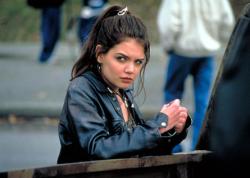 Disturbing Behavior can be looked at from a couple of different angles. From one aspect, it is a teen horror/sci fi film. From another it is a liberal's paranoid nightmare.

Steve is a new boy in town and soon discovers that something is not right. The school has the usual cliques. The jock group, called The Blue Ribbons, is, of course, the bad guys and the drug using stoners are the heroes. The Blue Ribbons all wear school jackets and sweaters and hangout in a yogurt shop. They all act like some myopic 1950's vision of ideal teenagers, except they all have terrible tempers.

Steve's best friend, a pot smoking outcast, warns Steve about The Blue Ribbons being evil. Steve thinks he is just paranoid until his friend shows up one day at school, cleaned up, and hangs out with The Blue Ribbons. In the mean time, Cyclops falls in love with Batman's girlfriend Rachel. Or as Gavin says, when they first meet, "Appropriate sparks are flying, somebody cue the power ballad."

Disturbing Behavior moves along and gets a bit sinister while Steve acts like the reluctant hero. Very few surprises occur and not a whole lot of anything happens that you cannot see from a mile away. If the parents had been in on everything then the movie could have raised an interesting question. Instead, the parents are just your average clueless Hollywood 90210 mother and father who know less than their kids. The movie could have been a poignant comment on how parents want something for their kids even while acknowledging that they have free will. Sadly, the film has no depth.