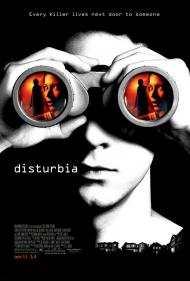 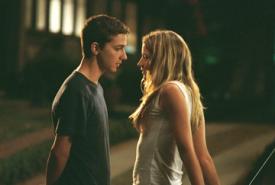 As every critic has written, Disturbia is a reworked, younger version of the Alfred Hitchcock's 1954 classic, Rear Window. What everyone is not mentioning, is that it is far closer to 1985's vampire flick, Fright Night. In both films, a highschool age boy, who lives with his single mother, spies on his neighbor, often with binoculars, and suspects that he may be a killer. Both get help from a best friend and a girl that he likes. Both film's also have a scene where an apparent call girl shows up at the neighbor's house only to become a victim.

Lebouf, the former Even Steven star, plays a highschool student, Kale, who is emotionally scarred by witnessing and for being partially being responsible for his father's death. Because of that, he apparently becomes a withdrawn, troublesome student. He hits a teacher and ends up sentenced to house arrest for the summer. It is all just a drawn out excuse to get him trapped inside his house.

Once his mom takes away his X-Box and his bedroom television, he starts staring at the neighbors out of boredom. A family moves in next door that just happens to have a hot girl his age, who likes to wear small bikinis when swimming by herself in the backyard pool. He also has a neighbor who he thinks is a serial killer. The movie jumps constantly between his staring at the girl and spying on the killer.

Although Disturbia has a couple of jump out of your seat moments, it takes far too long to get to the suspense. It is a bit dragged out and padded with some teenage angst and flirtation. In Rear Window, Jimmy Stewart starts out the movie trapped in his house with a broken leg. Disturbia has the father's death back story, and then a very unfunny scene in Spanish class, where Kale's best friend's dialogue should have been cut to 2 seconds at most. It also takes far to long for them to discover the truth about the neighbor. The reason is that if they did, then they would just call the police and end the movie. In Fright Night, the boy calls the police but they do not believe him because he claims his neighbor is a vampire.

Disturbia stole some decent ideas from two better movies then did nothing new with them, other than to add new technology. Kale and his friends spy on and investigate the neighbor using computers, cameras and cell phones. But like this movie proves, just because it is modern, does not mean it is better.