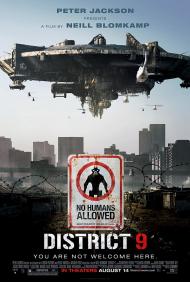 District 9 is told in flashback through interviews, video and actual film. Twenty years ago, a huge alien ship appeared and hovered above Johannesburg, South Africa. Other than a piece falling from it, the ship and it's occupants do nothing. After three months, some humans helicopter up to it and cut their way into the ship. They find a million sickly aliens, who get nicknamed "prawns."

The Prawns are put into a huge refugee camp, known as District 9. It resembles a third world slum. A large private company, Multi-National United (MNU) is supposed to look after the Aliens but is actually only interested in their advanced weapons. A Nigerian warlord is likewise after their guns. He runs a black market, selling cat food, which the Prawns love, for weapons. The problem is that the alien weapons only work in combination with the Alien's DNA.

Twenty years later, Wikus Van Der Merwe, who is the son in-law of the MNU CEO, is given the job to relocate the aliens to a new camp. In the process of going door to door to notify the Aliens of their eviction, he finds a substance that accidentally gets sprayed in his face. It makes him sick and he ends up going to the hospital. MNU captures him and is excited to discover that he is now able to use the alien weapons.

Wikus escapes and is suddenly a very valuable commodity. Not only is MNU after him, but the Warlord wants him for the same reason. The substance he found is also needed by an alien to restart the mother ship. The final half hour of the film is an all action packed gore fest.

What held the movie together for me was Sharlto Copley. In his feature film debut he at once makes you like him and sympathize with his plight. Even when he is doing questionable things you understand why. At the beginning of the movie Wikus is a desk jockey carrying the burden of being married to the bosses daughter. By the end of the film, he is his own "man" and could never possibly be content to sit at a desk again.

District 9 never fully explains why everything happens. Why did the ship come to earth? Was it an invasion force? They had weapons. What went wrong with the ship? Were their humans aboard at the end exploring it? If you think too much about everything the movie gets a bit frustrating. The ending is not wholly satisfying, as it sets itself up for a sequel. One that I will surely watch.

Not a remake of Alien Nation, but there are some definite similarities.

I could not agree more Eric. I wanted answers. The aliens have these awesome weapons. So awesome that one guy wearing one of their mechanized suits is able to take out an army on his own. Why then, do they submit so meekly to the humans? And like you I wanted to know why the aliens were there to begin with. I also wonder how the creators of Alien Nation feel about this movie basically ripping off their story?

During the movie though, I didn't really ask many questions because I was too busy being entertained by it. This is a taut thriller that builds to its action-packed ending. It pretty much kept me on the edge of my seat.

Copley is good, as you mentioned Eric. His character does some pretty despicable things and yet he still remains a somewhat sympathetic character. Even at the end of the movie when he finally makes the correct decision, I almost felt as though he was doing it more for personal revenge than because he'd actually had a change of heart.

The very best Science Fiction is used as a metaphor for the real world and that is in part what this movie does. District 9, with its South Africa setting, is clearly making a statement about racism, but not in a heavy-handed way and certainly not in a way that mars the entertainment value.

While I really enjoyed the way the movie was filmed, I didn't like how while 90% of the movie was filmed as if we were watching a documentary, but the other 10% was filmed like a movie. It didn't bother me to any great degree, but was a little bit annoying. I wish they could have found a way to seamlessly carry on the illusion throughout the entire film.

Really though, despite my questions and small complaints, this is a great movie. I too look forward to a sequel.

District 9 does leave many questions unanswered but like my brothers I thoroughly enjoyed this movie. It starts with an intriguing premise done in a mockumentary style. The first half hour makes a statement about man's nature or rather his inhumanity. The sudden forced eviction of the "prawns" was inspired by a real life 1966 incident in a mixed race neighborhood in Cape Town that was intentionally segregated by the government. 60,000 residents were forcibly relocated to Cape Flats, some 15 miles distant. Things have improved since then but keep in mind that the dilapidated shacks used as homes for the aliens in this film were actual shacks lived in by people. They weren't built specifically for this movie.

District 9 morphs into a straightforward action flick at about the half-way mark. Although it continues making a symbolic statement about humanity throughout the film. At first the aliens seem crude and unsophisticated in their behavior but they are ultimately shown as the more enlightened species. The most obvious symbolism being Wikus himself. As he becomes less human his actions become more and more humane.

Humans, from the multinational corporation to the Nigerian thugs, are shown in almost an entirely negative light. In fact the film was boycotted in Nigeria in protest of their portrayal as criminals and superstitious cannibals. By the end of the movie we identify with the alien father/son as well as with Wikus as he morphs into a "prawn" and together they fight against the human power structure.

Neither the Nigerian controversy nor the film's rather bleak representation of human nature hurt the success of District 9. It grossed 210 million dollars worldwide, 7 times its 30 million dollar budget and garnered 4 Oscar nominations, including the highly coveted Best Picture.

It's not a perfect movie. Some of the plot devices seem a bit obvious and coincidental. The alien weapons can only be fired by someone with alien DNA. How convenient then that the first part of Wikus's anatomy to change is his hand and forearm. And when Wikus and the alien are surrounded after going for the precious fluid it seems a bit too easy for the alien to grab a few random objects and within seconds construct a bomb, which enables them to escape through a wall. But these are minor quibbles.

District 9 is that rare breed of film that thoroughly entertains while making a strong statement about the ugly side of human nature. Bring on District 10 already!