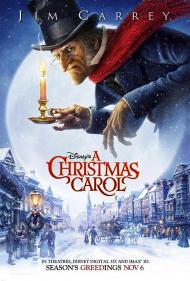 God bless us, everyone.

Making A Christmas Carol into an animated movie must have been challenging. How do you find the balance between it's original adult theme of death and redemption and still keep children entertained? Disney made a valiant effort, and almost pulled it off.

The story of Ebenezer Scrooge is well known by all. A miserly old, bitter man treats everyone around him badly. Due to his past experiences on Christmas he hates the holiday. One Christmas Eve he is visited by some ghosts who show him the truth of his past, present and future.

The hiring of Jim Carrey was inspired and yet pointless. His name guaranteed some ticket sales. However, Carrey does not have a distinct enough voice to make a difference, entertainment wise. Sure he does a good job at what is required, but the fun of celebrities in animated movies is recognizing their voice. If I was not told ahead of time, I would not have known it was Carrey in the lead.

Based on Dickens novel, A Christmas Carol is a hard sell to children. It takes place a long time ago when people spoke differently, even if in English. "Enter, and better to known me man!" Translation, "Come in and lets talk." Adults will not be bothered by that, but children will get lost and as in my theater, bored.

To make this movie more accessible to children, an extended chase scene was added near the end. Scrooge turns tiny and gets chased around by the shadow of a horse drawn hearse. It lasts far too long. By the time it showed up the movie had already lost their interest. Several were busy running around annoying the adults who were enjoying the movie. The scene should have been cut as it came to late to make this entertaining for kids, and disrupted the pace of the movie for the adults.

The best this version has to offer is the animation, which is astounding. The scenes of the ghosts showing Scrooge his past and present is a banquet for your eyes. If those scenes do not make this movie exciting enough, the chase scene won't change your opinion.

This is not a movie for small children. Go see this one on the big screen with your teenager. To introduce your little ones to the story of Scrooge pick up Disney's 1983 animated version Mickey's A Christmas Carol. It does not have a famous cast or fancy animation, but at 26 minutes it will not bore them like this 96 minute version. It even has some great lines. Goofy as Marley says, "Ebenezer? Remember when I was alive I robbed from widows and swindled the poor?" To which Scrooge McDuck responds, "Yes, and all in the same day. Oh, you had class, Jacob." 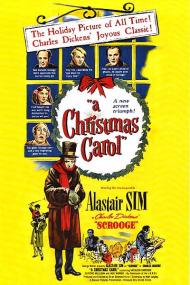