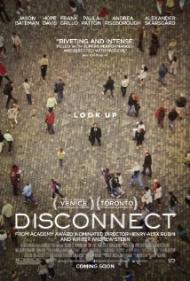 Technophobia has long been a theme in films and literature before that. Probably when the first caveman started using a club, some storyteller around the campfire told a tale of how the club would turn on its owner and destroy the tribe. But then fear always plays better than joy. Disconnect is another story in that long tradition, with its focus of fear being the internet and social networking.

The film is three stories woven together with loose connections between each of them. In one story, Jason Bateman and Hope Davis play parents of a son who attempts suicide following a humiliating incident online where a nude photo of himself is made public at his school. Bateman's character is a lawyer and one of his clients is a news station where a reporter (Andrea Riseborough) is doing a story about underage, online sex workers.  When she becomes too close to the story, and one underage boy in particular, the FBI becomes involved. The final story involves a couple (Alexander Skarsgard and Paula Patton)  who are recovering from the death of their baby son, who become the victims of identity theft. Their connection to the other stories is that they hire a private detective to investigate the theft who is the father of one of the boys who compromised Jason Bateman's son online.

While the plot sometimes becomes melodramatic and even delves into soap opera territory, with the parents of a dead baby having marital problems storyline the most guilty, it is saved by the well done acting of its cast.

Jason Bateman is particularly effective as the father trying to cope with the suicide attempt by his son. While his son lies in a coma after trying to hang himself, Bateman tries to learn what drove his son to suicide. While his wife reacts emotionally, he copes the only way he knows how, by looking for answers and someone to blame. As he explores his son's computer and Facebook page, he realizes how little he knew about his son's internal world.

He's not alone in delivering a stellar performance. There's really not a bad performance in the bunch. Often in these multi-story films there is one or another that holds your attention, while others leave you cold. By limiting the story to just three, instead of spreading itself too thin, this film manages to make all of the storylines interesting.

Hollywood often gets technology wrong, not understanding how it works or going overboard with the visuals, feeling that someone sitting at a computer and typing isn't interesting enough. This film deserves credit for getting it right for the most part. It's only in the private investigator's explanation to  Skarsgard and Patton that the script exaggerates technologically what computers and users are capable of. It is this misunderstanding of technology that tends to generate the most fear.

What this film shows is that technology, while it can connect people, can also keep people apart or at a distance. Following the death of their child, the parents retreat into their own online world rather than communicating with each other. The father gambles online while the mother visits chatrooms to talk with others who are grieving. It demonstrates how it's often easier to open up to people that we've never met and the dangers that presents.

Fear of technology is an old story, but director Henry Alex Rubin and screenwriter Andrew Stern manage to put a new spin on it thanks, in large part, to a talented cast.