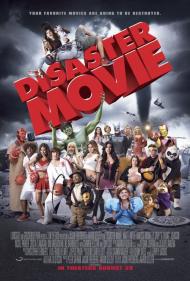 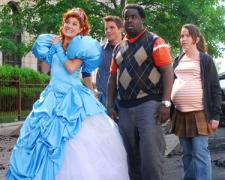 No matter how hard they looked, none of these actors could find the script.

I know this is a giveaway line but Disaster Movie is a disaster of a movie. With almost no plot and few laughs, this film looks like it was made up as they filmed it.

A group of twenty some things are at a 25 year old guy’s sweet 16 party when meteors start to hit the city. Celebrities and super heros start to appear at random as a small group from the party wander off.

My son laughed hardest when the group comes across Hannah Montana/Miley Cyrus dying under a meteor rock. He’s not a mean kid, he’s just tired of hearing about her. My favorite part was when Matt Lanter was making like Hayden Christianson in Jumper. He ends up falling on Prince Caspian’s sword, who then says, “It’s the guy that ruined Star Wars.”

The movie is desperate for jokes. At one point, Enchanted Princess car jacks Speed Racer and shoots him several times till he is dead. They then find Michael Jackson in the trunk of the Mach 5 and ½, with a little boy and a chimpanzee. Michael say, “I was just playing with my monkey.” You know a movie is desperate for a laugh when they drag Jackson out of the closet.

The foulest humor comes from the very pregnant Juno. At one point she drinks a bottle of alcohol and says, “Time to get the sea monkey plastered!” When she gets into a fight with Carrie, from Sex and the City, she uses her feet to kick her like The Zohan. Even her unborn baby extends her foot out of Juno’s womb and forces Carrie to suck it.

One good scene featured Kim Kardashian and Carmen Electra wrestling. It was not so much wrestling as it was boobs and ass on display. Electra should make more movies with Kardashian because she makes Electra look like an Oscar worthy actress.

My 14 year old loved Disaster Movie. Maybe I am just too old to like this kind of humor, or maybe at 14 he has not seen enough films to judge crap from fertilizer. 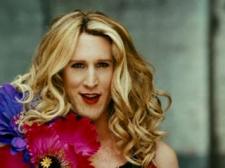 The humor is definitely aimed at 14 year olds. You know the age where fist-fights, belches and songs with dirty lyrics are funny. Yes the plot is pointless and the gags drag on too long, but I still laughed out loud a few times. Enchanted Princess excitedly asking a taxi, “What kind of magical creature are you?” before being plowed into was one moment. I also chuckled at the Amy Winehouse, Justin Timberlake and Jessica Simpson caricatures. They were as good as anything SNL has done lately.

I agree with my nephew that Miley Cyrus’ death scene was funny. Especially when she went from Hannah Montana to Miley. But the only truly hilarious moment came when Alvin and the Chipmunks turned into a demonic Death Metal group. The only good writing was the spoofing of the hipster slang of Juno, stating that she constantly speaks in over-written, clever for clevers’ sake quips.

A part of me can still enjoy these junior high jokes. And even though it is only shiny celluloid trash, I much prefer the incredibly broad parody of Disaster Movie to the stupid, juvenile humor of the Jack-Ass movies. 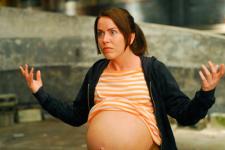 I was not ROTFLing during this movie.

This movie is fucking awful. Quite possibly the least funny comedy ever made. I chuckled (never laughed) maybe two or three times.

You can see how this movie was put together. Somebody wrote a list of topical characters and movies and said, "Okay, we need to reference all of these somehow" and then someone wrote a "script" around that list. I mean this is just the laziest writing ever. A lot of the jokes aren't even spoofs but merely references to the movie or the celebrity. The best they generate is a snicker of recognition.

The only parts that even made me chuckle were Juno (the way they spoofed her hipster style of talking, not the disgusting pregnancy physical 'jokes'), and the idea that the enchanted princess hadn't come from a magic kingdom, but was in fact a crack whore who lived in the sewer. Then of course they take both of those jokes and beat them into the ground.

It is a giveaway line Eric, but it's also a 100% correct one. This is a disaster of a movie.