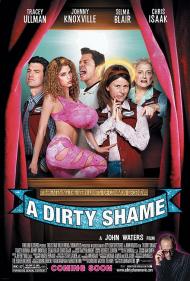 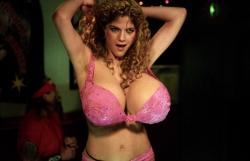 Selma Blair in A Dirty Shame.

When director John Waters releases an NC-17 film about sex addiction, you can be sure that the boundaries of good taste are going to be tested, which is exactly what happens in his latest film, A Dirty Shame. Fortunately, while not for the timid (or neutered, as this movie would say), the boundary pushing is done with a sense of fun and a lot of laughs. As a comedy, this movie works, but it feels like a string of jokes on the same subject rather than a story.

Ullman stars as Sylvia Stickles, a convenience store owner and sexually repressed Baltimore housewife. After suffering a concussion Sylvia becomes a sex addict, quickly discovering that there exists a cult of sex addicts all over Baltimore, led by a messiah-like figure known as Ray-Ray (Knoxville). As Sylvia's addiction grows and the addicts become more open with their sexual fetishes, a counter movement to put down the addicts is initiated by Sylvia's mother and some of her neighbors.

In this day and age when the mere split-second exposure of a nipple on national television is treated as a serious scandal, the subject matter here is very timely. With tape delays on live television events, there does seem to be a rise in Puritanism around the country. Or, as one of the characters in this film says, "We tried tolerance. It didn't work!" Since this is a Waters film however, the subject matter isn't taken too seriously, and is played for laughs.

And there are some real laughs to be found here. "Even as we speak, someone right now is shaving their pubic hair! There's pubic hair in the air," says one character. "I'm viaggravated and I'm not going to take it anymore," says another. And Tracy Ullman does a version of the hokie pokie at an old folks home that will stay with you for a while, as she picks up a water bottle using only her "cooter" as one of the women describes it.

Eventually though the movie begins to run out of steam. The jokes keep coming, but the plot is very thin and I found the ending to be a bit of a let down, almost as if after a great setup, there's nowhere for the story to go.

Like others of Waters' films, there's a lot of sex going on in this movie, but like his earlier works, I would never use the word sexy to describe it. Often times grotesque, like the man who gets turned on by eating dirt, or another man who enjoys defecating in public places, but never sexy. Even the nudity, what there is of it, both male and female full frontal, is not done by traditionally attractive people.

Not for the faint of heart moviegoer, A Dirty Shame is a funny romp with a simple message of sexual tolerance. 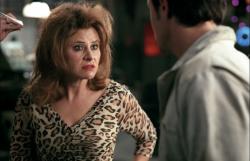 Tracey Ullman in A Dirty Shame.

A Dirty Shame provides a textbook example of both the strengths and weaknesses of John Waters as a filmmaker. He is great at setting up a funny idea and can write one liners with the best of them. Who but Waters would have a female character receiving oral sex say, "Now that's what I call sneezing in the cabbage."? What he can't do nearly as well is develop a story or make satisfying endings.

Hairspray, Cry Baby, Serial Mom and Pecker are probably his best movies. What sets them apart is the fact that they feature more fleshed-out characters with a better story arc. Dirty Shame, like Waters' early movies and his recent Cecil B. Demented, provides laughs but fails to fully deliver on the clever set up.

The first half of this movie is hilarious. But eventually it just runs out of laughing gas. And Scott is right about the ending. What the hell was that?! And was banging heads together really the funniest idea he could come up with for the ultimate undiscovered sex act?

A Dirty Shame IS a funny movie, just keep in mind that the first half is the better half. 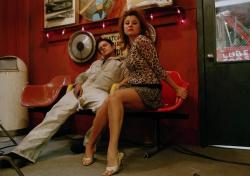 Johnny Knoxville and Tracey Ullman in A Dirty Shame.

There are a few funny lines. My favorite is when Sylvia's mother defends her to a neighbor by saying, "My daughter's a good girl. She hates sex!" However, too many lines seem to be there just for the sake of naming body parts: "Your vagina belongs to eternity." and "Come home to my penis where you belong." are two such examples.

I disagree with Scott. I do not believe there is a recent rise in puritanism. He sights Janet Jackson's nipple exposure as an example. The media jumped on that story for titillation sake. They couldn't wait to keep the public abreast of that story. The general public would have long let that story go if the media had found something else sooner to write about.

That is the problem with this movie. It has people objecting to sex. EVERYONE likes sex. Not everyone likes to see in the street. This movie attempts to say that some people are sexually repressed and if only they would embrace a good orgasm, or hit to the head, they would be more acceptable of the different aspects of sex. Like Janet Jackson's nipple, most of us do not care what other people do in there own bed. They just do not necessarily want it done in front of them.

This movie takes people from both sexual extremes and tries to have them clash in a funny way, but it is too over the top to really be funny.