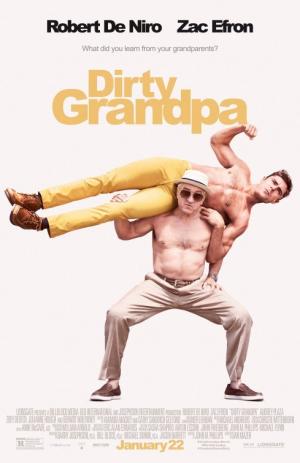 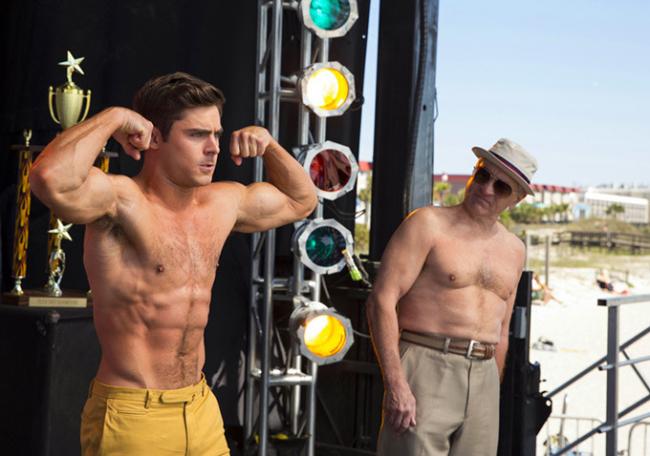 Clearly, Robert De Niro is taking any script that comes his way. Dirty Grandpa is a crude, juvenile comedy that relies on drug and penis jokes, lots and lots of penis jokes. Worst offense of all is the complete predictability of the script.

Zac Efron plays Jason, a lawyer one week from getting married to a girl whose father works at his father's firm. After attending his grandmother's funeral, who finally succumbed to cancer after a 10 year battle, he agrees to drive his estranged grandfather to Florida to visit an old friend and be back in time to help his fiance finish the wedding details. Once on the road it quickly becomes apparent that Grandpa wants to party and get laid. Or as he explains to Jason, "I haven't had sex in 15 years."

What follows is one dirty joke after another that either involves sex, male genitalia or drugs. Efron seems to lose his clothes far too often. One scene involves him being completely naked on a beach while a young boy's father thinks his son is performing oral sex on Efron. The immaturity of the proceedings quickly becomes tiresome. Not just once do we have penises drawn on someone's face but twice.

There are some laughs to be found. I liked how everyone constantly mistakes Jason for a lesbian. When he first meets his Grandpa's old friend, he asks Grandpa about Jason, "Who's the lesbian?". When some police come upon Jason kissing a girl, one commands, "Okay you two lesbians, break it up."

Aubrey Plaza steals all of her scenes. Her Lenore, is into gerontophilia, which is enjoying sex with old people. She is turned on by Grandpa and wants to have sex with him. Dirty sex talk for her is telling Grandpa to say old person things like how early they eat dinner or, "Tell me how the neighborhood use to be safe."

As Jason and his fiance are tight laced, we just know that this trip will loosen him up. The moment he runs into an attractive, free spirited former class mate, who shares his passion for photography, we know exactly where the movie is headed. A better ending would have been Jason confessing to his fiance that he is not happy with how things are going and finding that she feels the same way and they move on together on a new path.

At one time, De Niro was considered a highly respectable "A" list actor, but films like Dirty Grandpa makes him seem more like a "B" actor so need of work, he will make any movie he is offered.