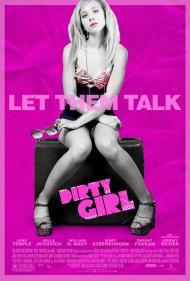 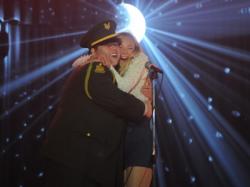 Dirty Girl, from first time writer/director Abe Sylvia, is an amusing, and at times touching, coming-of-age road trip movie. It works, to some degree, as both a campy comedy and an adolescent angst piece. While it’s easy to get caught up in the story, which proceeds at a peppy pace, original it’s not. The style of the humor is Early John Waters Lite but the maudlin ending has all the surprise of an episode of Glee and is decidedly un-Waters like.

It’s 1987 in a small-town Oklahoma high school. The school slut and the fat gay kid get thrown together on a class project. They must pretend to be parents to a 51b bag of flour and record the experience in a journal. They agree on the name Joan for their baby. She thinks Jett while he thinks Crawford. They draw a simple face on the flour bag which changes expressions throughout the movie.

Before you know it Danielle and Clarke (with their flour baby in tow) are on the lam towards Fresno. She’s going to look up her biological father while Clarke is escaping his father’s physical abuse over his being gay. They have adventures along the way, soon realizing that as fellow outcasts they have much in common.

Sure the plot’s creaky but the cast is good enough to pull it off and the script has some genuinely funny lines. The pretty slut with the heart of gold and the effeminate wisecracking fat guy are clichés to the point of being archetypes. In the capable hands of Jeremy Dozier and Juno Temple, however, Clarke and Danielle seem familiarly real, and are more than just one note stereotypes.

The best scenes are between the two of them. Clarke is a male that doesn’t treat Danielle like a sex object or judge her by her reputation. Danielle accepts Clarke’s sexual orientation and enjoys talking about boys with him. They demonstrate what society has known for a long time now; namely that a hot female and a gay best friend make a powerful team.

Regardless of the clichéd story and characters Dirty Girl exudes a certain charm. It made me laugh and it made me tear up a bit as well. Bette Davis as Margo Channing in All About Eve says, “I detest cheap sentiment.” I, on the other hand, am a sucker for it when it’s done this entertainingly (and with a kick-ass soundtrack that I’ll leave for Scott to elaborate on). 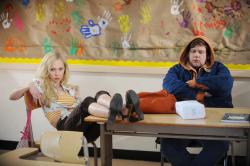 Dirty Girl stands in sharp contrast with the last movie I reviewed before this one, which was The Ides of March.  Where Ides was technically well done, but unaffecting, Dirty Girl seems occasionally sloppy and uneven, but generates much more emotion. Its flaws are mostly covered and forgivable though, thanks to the likable and sincere performances given by its two leads.

I agree with Patrick that the soundtrack was good, filled with 1980s hits, but curiously the hairstyles and fashions seem more reminiscent of the 1970s than they do the '80s, but then the film is set in Oklahoma and maybe it took longer for the '80s to arrive there.

The movie is rough around the edges though. Patrick, you called it John Waters-lite and I see your point. At times the script is going for campy fun, but then in the next scene it wants to be heartwarming and the transition isn't always a smooth one.

Despite a nice turn by Milla Jojovich as Danielle's mother, any scene without Danielle and Clarke is a superfluous one. Mary Steenburgen and William H. Macy, both normally quite talented actors, never really gel in their parts and Dwight Yoakam is too cliched and silly to ever come across as seriously threatening.

This isn't a movie likely to find mainstream success, but it may live on with a cult following when it's available for download, thanks to its two leads. 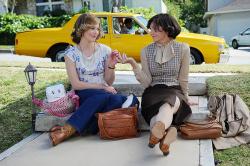 Loving your kids means acting like you love them.

There is not an original moment in Dirty Girl.  It starts out like a spin off movie for "Married With Children", centering on Kelly Bundy and ends, as Patrick noted, by way of "Glee."  Although that may not make much sense, I believe that was exactly what the author was going for.

Early on, Danielle is shown in control of her life.  She targets a guy and seduces him.  It is not that she is some sex starved beast, but that it gives her attention.  Not only from the boys but from other classmates. Notice, the one time she is actually shown having sex is in a car in the school parking lot, just before school starts.  The bouncing car is hardly discreet as other students walk by.  Afterwards, she steps out of the car with an expression of satisfaction.  Again, not sexual satisfaction, but one of as if to say, "Yeah, that was me, so what?"

Patrick, I am not sure what you mean by, "...a hot female and a gay best friend make a powerful team."   I get that an attractive girl sees a gay man as a non-threatening male to spend time with.  I get that a gay man may emulate a sexy girl for the attention she gets from other men.  How is such an arrangement, "powerful?"

The only thing Danielle and Clarke really have in common is that they both have daddy issues.  It is the entire theme of the movie.  Even Joel the gay stripper, talks of his lack of fatherly love.  Abe Sylvia writes of fathers as if they were some alien concept.  Clarke's dad is a one dimensional idiot.  He has absolutely no concern for his son, other than he not be gay.  Danielle's biological hen pecked dad is pleasant enough but offers no resolution.  He never even suggests that they stay in touch.  Danielle's almost-step dad is a religious dork, who just wants to change her.

The mothers fair only slightly better.  They are shown as being caring but just as inaffective.  They are there to hug their kids when they need it, but neither knows what to do for them.  Danielle's mother's best effort is to marry a mormon she thinks will turn her daughter around.   Clarke's mom buried her head in the sand trying to ignore both her son's sexuality as well as her husband's abuse.

The soundtrack was filled with 80's chick pop.  It opens with Pat Benatar's "Shadows of the Night."  Sheena Easton was my 80's dream girl and her sexy hit, "Strut" plays during one of the film's funnier scenes.  The movie features a heavy dose of Melissa Manchester, including the "Glee" moment of "Don't Cry Out Loud."  Take note that Manchester plays the music teacher.

Dirty Girl has some funny moments when Danielle is cussing or shocking someone.  It tries to show some heart.  Ultimately though, it is just an indictment on the lack of parenting.  Clarke and Danielle are just two teenagers desperate for support and direction.  As their parents are unwilling or unable to supply it, they find it in each other.