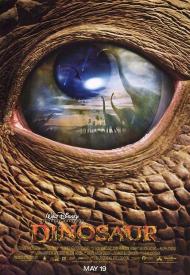 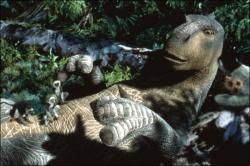 Dinosaur, featuring the voices of D.B. Sweeney and Alfre Woodard.

Now what about the most important part of a movie; the plot. First of all there is not much plot to speak of and what there is, is hardly original stuff. The first 15 minutes is a Tarzan rip off. Instead of a human being raised by apes, its a dinosaur being raised by lemurs. The rest of the film is a bunch of dinosaurs searching for a valley and water while occasionally getting attacked by big nasty, hungry carnotaurs. Wow, just like The Land Before Time cartoon.

My 6 year old loved it as will most children. He even got scared when some of the dinosaurs fought. However I was hoping for something more.