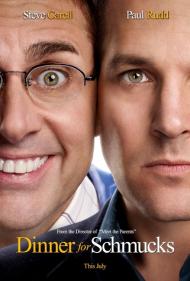 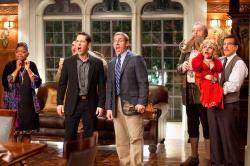 Tim with Barry and the rest of the schmucks.

I have recently been looking to foreign films for inspiration and apparently so has Hollywood.  From Death at a Funeral to Let the Right One In, many foreign films are being remade by Hollywood.  I have never seen the French comedy Le Diner de Cons, that this movie is based on, so I have no idea how similar they are.

Tim is trying to work his way up the executive ladder.  After impressing his boss with a business idea, he gets invited to his monthly dinner party.  Each person must bring with them an idiot.  Tim runs into Barry with his car while Barry is trying to pick up a dead mouse.  Barry is completely gullible and annoyingly honest.  Barry believes a co-worker can mentally control him.

Although the previews lead you to believe otherwise, the dinner party does not happen until the last quarter of the film.  First Barry has to invite Tim's overly stimulated stalker, Darla, over to Tim's apartment.  They once dated and she is a psycho still in love with him.  She and Barry get into a fight that is truly hysterical.  Barry also accidentally breaks Tim up with his girlfriend Julie.

My favorite scene comes next when Tim has a business lunch with some important potential clients.  They expected Julie to be there.  While Tim is making up an excuse Darla shows up, at Barry's behest, and pretends to be Julie.

Finally at the dinner, everyone's moron gets a chance to show off, or at least look stupid.  The funniest and saddest moment is when Barry announces that he lost his wife's clitoris.  You have to see it.  At the dinner both Barry and Tim grow and decide to be the men they want to be.  Barry even has a show down with his co-worker.

As Scott once wrote, "American comedies tend more towards sentimentality."  That is very much the case here.  Dinner for Schmucks could have easily been a dark comedy, and I wonder if the original was?  This version is kept light by the mere likability of Barry.  He is a moron, but a very nice moron.  Even when he does completely stupid things you find yourself rooting for him.

Carell is the key to Dinner for Schmucks success.  Although Barry is a complete jack-ass, you see a real human in him.  He is pathetic, yet endearing.  Rudd is the straight man but he gets a few laughs.  His biggest being when he tries to walk with a sore back.  Dinner for Schmucks is the best comedy of the summer! 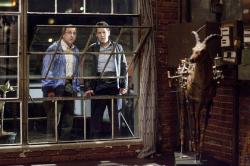 Steve Carell and Paul Rudd in Dinner For Schmucks

I couldn't agree more about Carell, Eric. He has an innate likability that has served his career well and it is put to good use here. Even when his character is at its most annoying you still can't help but like him. Rudd on the other hand has made a career out of playing the straight man. He does a terrific slow burn and delivers deadpan sarcasm with the best of them. This is their third pairing, following Anchorman and The 40 Year-Old Virgin, and I could easily see them doing more together.

As good as Carell and Rudd are, the supporting cast really adds to the humor. Lucy Punch steals all her scenes as the psycho ex-girlfriend Darla. Her "love" scene with Carell is one of the movie's highlights. Jemaine Clement is also quite funny as the eccentric artist Kieran. Galifianakis, who's comedic career is so hot right now, is perhaps the weakest character, offering the fewest laughs. His battle with Carell at the dinner party, while key to Barry's development, is actually one of the least funny scenes, bordering on stupid and not in a good way. David Walliams of Little Britain fame is surprisingly given the rather straight role of Mueller rather than a comedic one. And Chris O'Dowd, from the British Sitcom The IT Crowd, has a small but funny turn as the blind Swordsman.

The comedy is all very silly and often over-the-top. If you can't laugh at nonsense, I not only feel sorry for you, but also caution you to stay away from this one because that's what this movie is. If you go into it expecting some kind of sophisticated humor because it's based on a foreign film, then you're in the wrong theater. There's nothing sophisticated about this movie, but there is plenty to laugh at in it. 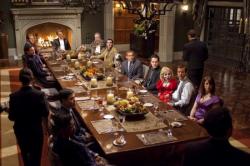 Dinner is served in Dinner for Schmucks.

I haven't seen the original French film either but from reading about it I've learned a few things. In that version the main character is much less sympathetic. He has attended previous idiot dinners, is having an affair on his wife, and is deliberately cheating on his taxes. I guess they felt that for American audiences they had to make him more likable. But in all honesty he's still an asshole who is willing to lie and take advantage of others to get ahead. All of which makes the requisite feel-good ending seem even more contrived than usual. There is no way Julie would stay with this guy.

I agree that Steve Carell and Paul Rudd are an inspired comic duo. I just wish the script was as good as they are. It has its moments but for the most part it relies on such completely far-fetched situations that the humor never sinks below the surface. Barry, as written, is too stupid to live. Or as Tim says about him, “Barry would throw himself under a car to protect a mouse... that was already dead.”

Some of the jokes work. I chortled when Mueller's finger gets cut off by the blind swordsman and he exclaims, “It's my wife's favorite finger.” I chuckled when Barry sees a picture of Kieran with Nelson Mandela and gushes excitedly, “He's friends with Morgan Freeman!” And I guffawed when Barry attempts to explain just how dumb his coworker is, “He slept with Martha at my house! I was under the bed the whole time. What an idiot!”

Lucy Punch is hilarious as Darla. She makes the funniest facial expressions and brings a jolt of humor to every scene she's in. Her fight with Barry is the highlight of this very silly comedy. Like Scott I enjoyed Jemaine Clement as Kieran and thought Zach Galifianakis fell flat as Therman. Dinner for Schmucks is funny in a generic way due mostly to the talents of the cast, but it isn't a story you can invest any real emotion or thought into.