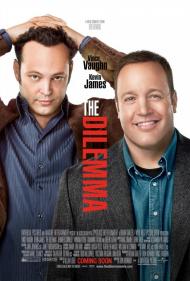 The Dilemma is a mess from start to finish.  It begins with introducing two couples.  One is married while the other lives together.  The two men are business partners and have known each other since college.  The film shows them talking, dancing and partying at some Chicago night spot.  The scene seems to go nowhere.  Vaughn rambles some fruitless dialogue.  The only thing I got out of this was just how hot these two fat guy's wives are.

Eventually Vaughn discovers Ryder is having an affair on James.  Since that is the entire plot, the film should have opened with that scene.  He confronts her, but she ignores his threats to tell.  Vaughn and James are in the middle of a huge business deal and the added stress would not be good for James.  At least that is the excuse they use for Vaughn not telling him.

The rest of the film has Vaughn dealing with the secret that he chose to not tell anyone.  His girlfriend, Connelly, thinks he is back to gambling.  He gets into a fight with Tatum.  The entire paper thin plot is just him getting to the point of telling James that his wife is stepping out on him.

Then the film throws this nugget into the mix.  James goes once a week to a massage parlor to get a happy ending.  It gets glossed over fairly quickly though.  Ryder seeing a guy for sex is a marriage ending affair while James paying a prostitute for a hand job is merely frowned upon.  What the hell is that?

The film's sexual morality is not it's only messy social issue.  GLAAD has issued a statement complaining about a scene where Vaughn calls electric cars, "gay."  In the film, Vaughn goes on to explain that he does not mean gay as in homosexual, but the scene apparently offends just the same.  Anderson Cooper complained on Ellen about the scene as well.   “...we’ve got to do something to make those words unacceptable cause those words are hurting kids.”

There are two options Cooper.  You can raise the word to precious heights of censorship like, "nigger," where no one dare say it out loud.  That however, only serves to make the word more powerful.  If you want to seriously deal with this issue, ignore it.   The more people complain about it the more powerfully offensive it becomes.  Everyone gets made fun of.  On national television Anderson Cooper spoke derogatorily about the Tea Party having a hard time finding a voice because, "It's hard to talk when you're teabagging."

The sex and gay issues will cause more conversations than anything else about this film.  Last time I checked, Vaughn and James were comics.  After watching The Dilemma, I could be wrong.  There are damn few laughs to be found here.

The supporting cast outshines the leads, but only barely.  Queen Latifah goes on about getting some lady wood whenever she gets excited.  Tatum is a sensitive stud, who cries far too often and is really just a nice guy.  My favorite is Ryder.  Someone forgot to tell her this was intended to be a comedy.  She does some great dramatic work here.

GLAAD and Cooper should not have even opened their mouths about this movie.  Their complaints have created more interest in this gay film that it ever would have on its own.