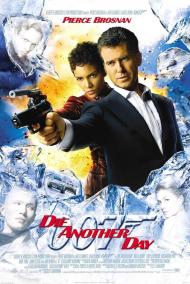 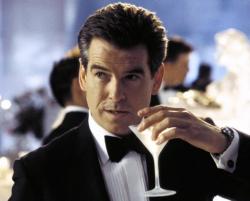 Pierce Brosnan in Die Another Day.

In this the twentieth official James Bond movie, Die Another Day, we are presented with a mixed bag. The gadgets, the girls, and Pierce Brosnan in his fourth outing as the super-spy, are all top notch, and the nostalgia and tributes to the earlier movies hidden within this one make it a special entry into the series. The villain, his henchmen, and the theme song however, are all fairly weak.

The movie begins in the demilitarized zone between North and South Korea. Bond is there to assassinate a renegade North Korean Colonel who is trading illegal weapons for illegal diamonds. Disguised as the man making the diamond drop, James Bond is recognized and tries to make his escape with the use of a hover craft. After an exciting chase scene, he is captured and taken prisoner. In a break from Bond tradition, during the opening credits, mixed in with the usual scenes of silhouetted nude women, are shots of Bond being tortured.

When the movie proper begins, fourteen months have passed and Bond is still a prisoner. He is released during a prisoner exchange. Frightened that he may have been broken during his imprisonment, M (Judi Dench) revokes his license to kill, and 007 must track down the person who betrayed him fourteen months ago so that he can redeem himself and be re-instated onto Her Majesty's Secret Service.

Along the way he meets Jinx (Halle Berry), a girl who is more than she seems, and who may or may not be on his side. She rises from the Caribbean in an orange version of the bikini worn by Ursulal Andress in Dr. No. As far as Bond Girls go, Jinx is one of the best. Like Michelle Yeoh's character in Tomorrow Never Dies, this is a Bond girl who is a match for 007. This is no damsel in distress, but someone who knows how to take care of herself.

Eventually the trail leads Bond back to London where it seems that British diamond mogul Rupert Graves (whose motto is Diamonds are For Everyone) may have been connected to the Colonel that Bond was originally sent to kill. M, sensing that Bond may be on the right track, secretly comes to his aid, bringing Q (John Cleese) along with her so that he may provide 007 with all the usual gadgets and some not so usual ones.

In a nostalgic scene, while Q introduces Bond to his new equipment, James picks up and examines a few old pieces of equipment including the briefcase from From Russia with Love and the Jet Pack from Thunderball. When Q gives the spy his new watch he says, 'Here's your new watch. Your twentieth I believe.'

After a confrontation with Rupert Graves at a fencing club, where another Bond first occurs when Madonna gets to be the first Bond theme singer to actually appear in the movie (not counting Sheena Easton's appearance over the credits in For Your Eyes Only), Graves invites Bond to a party in Iceland at his Ice Palace. He is celebrating the launch of his new top secret satellite system; The Icarus.

It's here that we are introduced to the other Bond girl, Miranda Frost (newcomer Rosamund Pike). She's an undercover operative who has infiltrated Graves' organization. Since avid Bond watchers know that there is always a good Bond girl and a Bond bad girl, I'll leave it to you to watch the movie to discover just which one is which.

The Ice Palace (i.e. the villains hideout) is where most of the climax takes place and I won't give it away, but in true Bond fashion, you can guess that there are explosions involved.

Overall, the movie is enjoyable and entertaining. The weakest portion of the film is the villain, who just doesn't live up to the great Bond villains of the past. The one interesting thing about him is his resemblance to the villain from the Bond novel Moonraker. I can only assume this was intentional since this movie contains so many other references to the Bond legacy.

As the twentieth Bond movie, and the film celebrating forty years of cinema Bond, Die Another Day is worthy. It tips its hat to the earlier Bonds without letting the tributes get in the way of the plot. And with Pierce Brosnan combining the best of all the actors who came before him in the role, we have a worthy Bond to begin the journey into the next forty years. 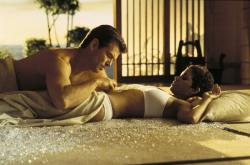 Pierce Brosnan and Halle Berry in Die Another Day.

The World is Not Enough was such a great James Bond movie that I was hoping for much of the same with Die Another Day. I was sadly disappointed. A pathetic villain and laughable coincidences left much to be desired.

The usual opening teaser ends with a cute quip by Bond and then the theme song. Here we have Bond being imprisoned and tortured while Madonna's theme song tortures the audience. Is this to be a new James Bond movie? One where Bond is not impervious? One where he can get hurt and perhaps fail? No, its just a lousy opening.

It has always been a joke in James Bond movies that the villains all want power and money. However, each villain seems to have more money than they know what to do with considering they always live in vast complexes and employ sometimes hundreds of people. In this movie the villains motivation is unique. He just wants his father's love. Of course he is willing to start a war to prove it. This guy builds a satellite that shoots lasers to Earth. This 'genius' spent billions building this thing so he could destroy mine fields between North and South Korea. You know, with all that money couldn't he just go out and get a truck load of really good psychiatrists?

Bond girls are plentiful. Along the way to stopping this Psycho, Bond meets Jinx, an American agent played by Halle Barry. She is easily the best thing about this movie. Sure she sleeps with Bond, but she also can defend herself. She is not the damsel in distress. The other Bond girl is a British agent who betrays Bond. Hey if you didn't see that coming you have never seen a Bond movie. Apparently background checks on secret agents just aren't what they used to be.

This movie has a nice scene where Bond and Q look at some of the old gadgets from previous movies. Since this movie does a little comparing I would like to as well. I hate Judi Dench in the role of Bond's boss M. The M of previous movies was never in the field. Dench's M is all over the place. The Ian Fleming books make the point that M's identity was top secret. The way this M gets around everyone probably knows who she is. She scolds Bond every chance she gets. She comes off more like a disapproving mother than she does a secret agent's boss.

I saved my best complaint for last. I am referring to that stupid surfing scene from the glacier. The special effects were so obvious I thought I was watching an arcade game. I know over the top stunts are a staple, but this movie started so serious that I hoped for better.

If I failed to mention any sort of plot it is simply that it doesn't matter. All James Bond movies follow the same plot. Bond goes globe hopping in search of bad guys, getting sex along the way. What started out unique ends up on a well worn path. This one is for Bond fans eyes only. 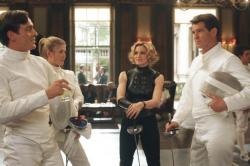 Admittedly I am not the Bond connoisseur that my brothers are, but having just sat through Die Another Day I cannot fathom how Eric gave this movie one star yet the last Bond flick The World is Not Enough he gave four stars to. I'm not suggesting that if you've seen one Bond flick you've seen them all (okay, yes I am). Still these movies are so incredibly similar that it just doesn't make sense to me. Anyway, I am done critiquing Eric's review now.

As my brothers have said and as anyone who has seen one of the twenty (official) James Bond movies knows, they have never been about plot or character development. In that sense Die Another Day carries on the fine tradition. Surprisingly though, I found myself enjoying the inane goings on in this installment more than I normally do. Perhaps the six-pack I drank while watching it helped but I think most of the credit belongs to Halle Berry. She looks great in the Ursula Andress retro bikini and displays more acting chops than your average Bond Bimbo. Also Madonna's brief scene was cute. She has always done her best screen work in cameos.

After forty years the Bond formula holds up well. Judi Dench's M and the somewhat more realistic opening action scene (I mean 007 being tortured and held prisoner for fourteen months!) are subtle ways in which the filmmakers are trying to update the series without losing the magic alchemy that has flourished all these many years. My favorite moment of pseudo-realism comes when Bond's doctor tells him he is in fine condition but his liver is not so great. But then if you've been swilling vodka martinis since JFK was in the White House your liver wouldn't be so hot either.

Of course we know that 'Bond, James Bond' will never grow old and die. He is cinematic comfort food for millions of aging fans.