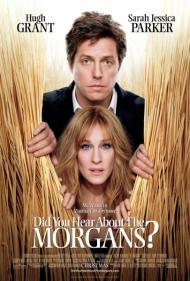 Sarah Jessica Parker and Hugh Grant in Did You Hear About the Morgans.

Considering how low my expectations were going into this movie, the fact that it still managed to disappoint me came as something of a surprise. I assumed this would be a typical fish out of water Hollywood comedy where the big city slickers would learn some down home truths from some offensively, stereotypical small town folks. The parts I got wrong were when I assumed this was a comedy (it would have to be funny for it to be a comedy) and it's never offensive because it's far too bland to offend anyone.

Hugh Grant and Sarah Jessica Parker are both slumming it as Paul and Meryl Morgan; a recently separated New York City power couple. One night when Paul and Meryl are walking and talking about their marital difficulties they witness a murder and are sent into the witness protection program for their own safety until the murderer can be caught. They are sent to Ray, Wyoming; a very small town so far in the middle of nowhere that even the jokes can't find it.

Some movies look like they were fun to make. Even if they're not very funny, it seems like the cast is having a good time. Here it often appears that the cast are as bored as the audience. Paul and Meryl have very few personality traits. Grant could play his character while asleep and often times here might actually be asleep. The script cripples his trademark dry delivery. Parker is little better. The two of them seem to share little natural chemistry and the script doesn't provide them with much of the artificial kind either. Steenburgen and Elliott are more believable as a couple and perhaps the story should have been told from their point of view.

I expected that the jokes would come from big city ways meeting a small town way of life. I assumed one or the other would be shown to be superior and the other would be the butt of the jokes. Either the city folks wouldn't fit in or the the small town people would be shown to be rubes. Something akin to Michael J. Fox's Doc Hollywood perhaps. Instead though, it seems that writer/director Marc Lawrence didn't want to offend anyone and keeps it all very bland. The closest that kind of jokes comes to happening is when Wilford Brimley shows up and complains about democrats and his freedom.

Perhaps you might think that when inevitably the killer tracks down the Morgans that something exciting might happen. Well, if you did, then you'd be wrong. Not only does he find out where they are laughably easily, but by the time he does find them, you'll probably be hoping that he kills them both. Either way, nothing much happens.

The amount of time you'll have to hear about the Morgans is only about an hour and forty minutes, but it feels much longer and when a comedy feels long, you know something's wrong. Of course, I only use the term comedy because that's what the movie claims to be. I've only got their word for that, no actual proof. 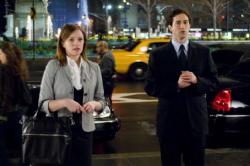 Elizabeth Moss and Jesse Liebman in Did You Hear About the Morgans?

What in the hell is Sarah Jessica Parker's charm?  She pretends to be good looking, but is clearly not.  Kim Cattrall put the sex in Sex in the City, not Parker.  She has appeared in a string of horrible movies, yet for some unexplainable reason, keeps getting work in film.  Does Sarah Jessica Parker have that much of a fan base that she deserves to still star in movies?

As Scott wrote, the movie seemed to not want to offend anyone, leaving the final product very bland.  It hints at a bit of conflict early on when Meryl meets Emma, who Meryl describes as Sarah Palin.   Meryl says she is a member of PETA, while Emma says she like to eat animals.   Emma makes her a bacon and eggs breakfast that Meryl chooses not to eat.  All of these scenes and more, are ripe for political confrontation but few come from them, leaving the film nearly frictionless.

There are some harmless stereotypes.  The folks of Wyoming speak with pride of having John Wayne and Clint Eastwood DVDs, while the Morgans are shocked by the low prices.   The townsfolk seem slightly old fashioned, while Meryl is so clueless that she packs a strapless gown, even though she only had one bag to take to Wyoming.

Hardly any of the jokes work.  What passes for a laugh is Parker aiming a gun, while Grant remarks, "This is nothing.  You should see how long it takes her to order dinner?"  or Parker trying to politely tell someone their house should be cleaned up to be better presentable.  The funniest line in the entire film is when Meryl says there must be some Democrats in town, and the little girl answers, "14, and we know who they are."

My favorite characters are Paul's and Meryl's assistants, Adam and Jackie.  She constantly berates him.  "My God you're a scared little man."  Clearly the friction is going to lead to sexual tension, and it does, but first she tazes him.  The film should have had them be the ones sent to Wyoming.