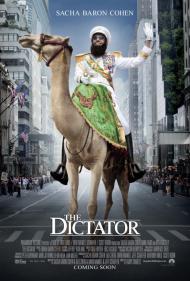 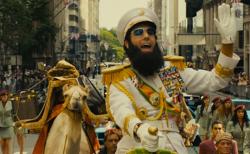 Sacha Baron Cohen in The Dictator.

Thanks to the endless promotion by Sacha Baron Cohen and the trailers that give away almost all of the plot and most of the funny jokes, I felt as though I'd already seen this movie before I watched it. It's already nearly three months since Cohen, in character as the Dictator, poured ashes all over Ryan Seacrest at the Oscars. There's still stuff to laugh at, but surely they could have edited together a preview that didn't give so much away? It's never good when a trailer does that, but it's especially damaging when it happens to a comedy that relies so much on shock humor.

Although there is a plot, it's a really very minor one. Like Cohen's earlier films, Borat and Bruno, this movie is more about a character than it is about a story. This one is more scripted than his earlier films, but there's a similar feel. It's a series of vignettes, almost like a group of Saturday Night Live sketches featuring the same character all edited together. Perhaps this is why the movie runs just 80 minutes long.

Cohen plays Admiral General Aladeen, the Supreme Leader of a fictional North African country called Wadiya. He is called to New York City to speak in front of the United Nations about his nuclear program. However, before he can give his speech, he is kidnapped, stripped of his beard and barely escapes with his life. Through a series of events he ends up working at a Brooklyn Co-op for Zoey, the hippy manager, played by Anna Faris, whom he finds himself falling in love with. But can Aladeen get back in power before his beloved country is turned into a Democracy?

90% of the jokes rely on being non-politically correct for their humor. And to be fair they often are quite funny. Aladeen makes fun of women, different races and religion and just about everyone else that he can. When he helps to deliver a baby in one scene, he discovers that it's a girl baby and offers to throw it in the trash. After Zoey tells him that she went to college, he laughs and says that "an educated woman is like a monkey on roller skates. It means nothing to them, but it's so adorable to us." It's just too bad so many of the jokes were given away in the previews.

With the entire movie rotating so heavily around him, Cohen is the only actor allowed to be funny. He plays two parts, both Aladeen and his dimwitted body double. The normally reliable Anna Faris is under used and wasted in her supporting part. Her character and Aladeen share zero chemistry and despite how tolerant she is shown to be there's no logical reason that she would take him under her wing or fall in love with him. Their relationship is one of the movie's weakest points.

The other weak point is that Aladeen is shown to be such a softie. He starts off as a ruthless dictator, but very shortly into the film we are given hints of what's to come when we learn that he's lonely and just wants to cuddle with Megan Fox after he's paid her to have sex with him (one of the jokes that should definitely have been left out of the trailer). And by the movie's end, without giving too much away, he has a change of heart that just seems out of character. The more unlikable he is, the funnier he is and the last thing this movie needs is heart and it fails when it tries to inject some.

I wasn't bored by this movie. It's much too short and enough of the jokes work to ensure that. I was disappointed in it though. For a movie that tries so hard to be shocking, it ends on a remarkably tame note. 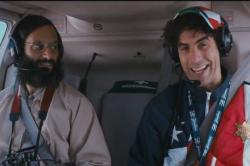 Jason Mantzoukas and Sacha Baron Cohen in The Dictator.

If the test of a good comedy is how many times it caused you to laugh while watching it then The Dictator is a success. I thoroughly enjoyed myself and haven't laughed this hard or often at a movie in quite some time. Yes it has more of a scripted story than either Borat or Bruno, and it does end on a shamelessly sappy note. It's still mirth inducing.

I disagree that Anna Faris is wasted. Everything she does is funny to me and this movie is no exception. She has one of the funniest reaction-faces in the business. Sure her character's motivations are completely contrived and the romance between her Brooklyn, feminist, vegan, hipster/hippie chick Zoey and Cohen's idiotic, bigoted, fascist Admiral General Haffaz Aladeen is patently ridiculous. It made me laugh and when I wasn't laughing I had a smile on my face.

Ben Kingsley is the actor I felt sorry for. He seems confused, and not at all amused to be in this movie. He is a talented actor but this brand of comedy is clearly out of his comfort zone.

In one clever running joke it is revealed that the dictator has changed many words in his language to his name, Aladeen, including the words for negative and positive. It then shows a man getting his HIV test results from his doctor. You get the picture. And in the scene Scott mentioned where Megan Fox sleeps with Aladeen she tells him she heard that Katy Perry got a diamond bracelet from him. He replies, “That was because she let me Aladeen all over her face.”

Some of the jokes don't work, like any of the Bin Laden references, which just seem dated now. And I agree with Scott that too many of the best ones were given away in the trailer. The scene in the sightseeing helicopter where the stereotypical American tourists get frightened by Aladeen and another Middle-Eastern man (see photo) is a good example. It's still funny but less so if you have already seen it.

The political speech Aladeen gives at the climax, satirizing the powers of the federal government and the current state of our capitalist system, is clever and amusing. Although it might anger some (Eric, I'm thinking of you) I thought it was hilariously on point. I'll grant you The Dictator is not as groundbreaking or shocking as either of Sacha Baron Cohen's other starring comedies but it is very funny nonetheless. It's kind of like an Adam Sandler movie only smarter. 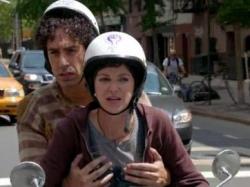 Sacha Baron Cohen and Anna Faris in The Dictator

On the contrary Patrick, I loved General Aladeen's speech.  "Why are you guys so anti-dictators? Imagine if America was a dictatorship. You could let 1% of the people have all the nation's wealth. You could help your rich friends get richer by cutting their taxes. And bailing them out when they gamble and lose. You could ignore the needs of the poor for health care and education. Your media would appear free, but would secretly be controlled by one person and his family. You could wiretap phones. You could torture foreign prisoners. You could have rigged elections. You could lie about why you go to war. You could fill your prisons with one particular racial group, and no one would complain. You could use the media to scare the people into supporting policies that are against their interests."

It is not 100% accurate and is mostly regurgitated liberal talking points, but it speaks out against our government, the banks and the media.  If anything needs criticizing in this country, it is those corrupt institutions.   The flaws in our ruling class, that Aladeen points out, do not belong to one political party and anyone who thinks they do are only fooling them self.  Aladeen does however go on to say, while looking at his girlfriend, "Democracy is flawed.  She is not perfect, but democracy, I love you."

As Scott wrote, Cohen does get most of the film's best lines.  "Are you having a boy or an abortion?"  He asks his pregnant wife.  However, a few good lines are given out to others.  John C. Reilly, satirizing a government agent, suggests that Aladeen see the Empire State Building, "Before you or one of your sand monkey cousins take it down."

Anna Faris is likewise given a few funny lines.  Her bragging about how open minded she is reveals that she is anything but.  "This is my store. This is a free earth collective. We are a vegan, feminist, non-profit cooperative operating within an anti-racist, anti-oppressive framework for people of all or no genders." She does not see her employees as anything more than their ethnic background.  With a haughty air of superiority, she proudly  says to Aladeen, "I am like the furthest thing from a racist.  I pretty much haven't had a white boyfriend since high school."  Aladeen then comments, "Well, the dark races are less choosy."

The soundtrack is the funniest I have heard in a long time.  "Aladeen motha fucka...."  plays while he arrives in New York atop an elephant.  Classic songs like Dolly Parton's "9 to 5" and R.E.M.'s "Everybody Hurts" are played during scenes, only sung in an Arab language. My favorite use of a song is "A Moment Like This."  You have to see it.  There are plenty of laughs to be found here and not all are politically incorrect, but they are the funniest.