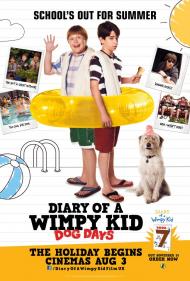 Steve Zahn and Zachary Gordon in Diary of a Wimpy Kid: Dog Days

Not since the Andy Hardy films has there been such a harmless, yet charming family movie series as the Diary of a Wimpy Kid films.  Greg Heffley, like Andy Hardy, often gets into minor trouble through his pursuits.  They both tell little lies and half truths to get what they want, but we know all will be resolved and a lesson learned before the credits roll.

Based on two of Jeff Kinney's popular books, Diary of a Wimpy Kid: Dog Days finds Greg wanting to spend his summer vacation doing nothing more than playing video games.  His parents try to get him interested in other things such as reading and joining a scout troop.  He finally gets motivated when his friend Rowley invites him to his country club where he discovers that Holly, the girl he likes from school, also spends time.

After accidentally offending Rowley's parents, Greg loses the invite so he starts sneaking in, telling his parents he has a summer job at the country club.  Greg's older brother Rodrick catches wind of what Greg is doing and joins in.  He has an eye for Holly's older stuck up sister Heather.  Rodrick's finest moment is when his band Loded Diper, plays at her birthday party.

Diary of a Wimpy Kid: Dog Days, like it's predecessors, is light harmless entertainment.  The jokes are often based on Greg finding himself in awkward situations such as when he and Rowley play tennis against Holly and Greg's arch nemesis Patty.  The films biggest laugh came when he ends up naked in the country club pool.

The most dramatic scene is when Greg's dad discovers the truth of Greg's employment.  What son has not dreaded the moment they look into their fathers eyes and see disappointment.  Like Judge Hardy having a heart to heart with Andy, we know Greg's father will understand and all will be well in their household.

Diary of a Wimpy Kid: Dog Days is the best family film of the summer. 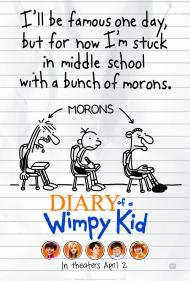 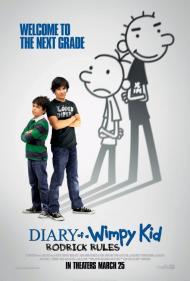